Most of my writing is for children and when I’m asked "When's your novel set?", the easiest response is to name a historical period, such as The Victorian Age.


However, on reflection, another answer might be “A historical time that I’ve found something to say about.” Which then leads into a slightly worrying question: “And quite how will the young reader read themselves into your intended historical world? How will they hear what you have to say?” 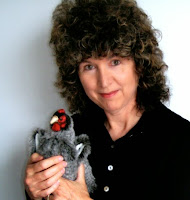 Children’s knowledge of history is often minimal. On school visits, I enjoy using history topics as starting points for writing workshops. Unfortunately, curricular pressure at Key Stage 2 has thinned history and humanities teaching so greatly that this doesn’t seem the rich ground it once was, alas!

I’d be pleased to be proved wrong - and no doubt a visit to museum or from historical re-enactors and / or authors like Caroline Lawrence would help immensely.

Therefore, given the young reader may well be on unfamiliar ground, how can they be attracted into this or that historical period? Where, exactly, should their young feet be planted for the journey? Should I stand them in "then" or "now", the "past" or the "present"?

Historical fiction placed firmly in the past gives reader the immediate experience of walking in another’s shoes, especially when written in the first person or diary form. Examples of “past history” novels for teens are Catherine Called Birdy by Karen Cushman, Geraldine McCaughrean’s Tamburlaine, Tanya Landman’s The Goldsmith’s Daughter or the first of Catherine Johnson’s Sawbones series.

Each writer entices the reader onwards with strong plot and subtle historical information, creating a believable “platform” for the young reader to stand on. This kind of storytelling seems to come from the conviction that the past is an interesting enough place for its own sake.

Another form -  the “slip back in time” novel - makes that historic distance explicit. The writer offers the reader a fictional step or still point to ease them into this particular historical journey. The young reader identifies with the “present time” hero/heroine and is then lured back into historic time. The “slip” need not be mysterious. Michael Morpurgo is an expert in the “I found a diary/ a letter / an object/ a photo and this was the story” approach.  My personal Morpurgo favourite is The Wreck of The Zanzibar about pilot boat crews on the Scilly Isles.

Traditional time-slip novels have a slightly ghostly quality: classics include Tom’s Midnight Garden or The Children of Green Knowe, characterised by a circular structure and a mysterious link revealed at the end of the plot. Were those writers – Philippa Pearce and Lucy M. Boston – eager to tell the reader that history’s “past” and today’s “present” are deeply connected?
Then there are the complex time slips – time travel, in fact - when the book moves between the past and the future, with the reader’s own present world as a balance point between the two. Susan Price’s books, The Sterkarm Handshake and The Sterkarm Kiss, balance future greed against the culture of the border rievers. (Any fans out there will be glad to hear a third Sterkarm will soon to be published.)

Joan Lennon’s Silverskin takes her reader into an even more distant community: her “future character” travels back to the world of Skara Brae. It seems to me that such time-slips, aimed at the teen and Y/A audience, invite the reader to learn lessons from the past, to examine the consequences in the future and consider choices being made now, for good or ill.
Finally, there’s the joy of writing historically rooted fantasies, books like Katherine Langrish’s West of the Sun troll trilogy, Michelle Lovric’s Undrowned Child Venetian fantasies, or Mary Hoffman’s world of Stravaganza. Is the fantasy reader being invited to experience the possibilities of story, or explore “what might have been” or just to play – and not always in pleasant ways - with the whole idea of “past times”?

Such a range of historical riches!

So how does one choose where to plant the reader’s feet? Historical fiction is many layered activity - inspired by a person, a place, an event, an object, a document or map or more – but how does one decide to tell about a true-but-fictitious historical world? Gut instinct? Maybe you don’t know until you’ve begun to scribble anyway? Or does the historical intention consciously supply the starting shape of your story? Or is it all a mystery anyway?

NB. Today’s post came into my mind after I’d read The Spirit of the Place, a book by Dennis Hamley, aimed at academic or adult readers. Originally written in 1993, this time-slip novel links the master plan of Nicholas Fowler - a fictitious minor eighteenth century poet, alchemist and grotto-builder - with Lyndsey Lovelock - a literature student, studying Fowler’s Pope-like poetry – and Rod, her suspicious boyfriend  who starts to investigate the secret research going on in Coswold, Fowler’s old house.

When the book was originally written, the human genome project was only just in the public’s consciousness and any effects were unknown. Republishing The Spirit of the Place twenty years later, Dennis Hamley could add to the novel, tell the 21st century  reader what had happened to Lyndsey and Rod and add a post-script to his original predictions. Now there’s time slipping indeed!

Thanks, Tanya. That's certainly the time-slip as the firm step leading the young reader into history, then!

Lovely post, Penny. Scholastic has a series of books, MY STORY. Each is written in diary form and so first person. I have written about six for them now, including THE HUNGER about the Irish Potato Famine, SUFFRAGETTE, NOWHERE TO RUN written from the pov of a Polish Jewish girl who flees Warsaw with her parents and finds a haven for a while in France… anyway, that is just to give you an idea. Many are taught in schools. The Irish Famine story is read in classes in Australia and New Zealand where, of course, there is a large Irish diaspora. I love writing them and have learned a great deal through the research. It pleases me to know that Scholastic do manage to sell them into schools.

Carol, I saw these titles - and your name - on a whole display case of the Diary series. They were in the library of a middle school I was visiting around World Book Day. The diary is certainly a powerful writing form for such histories.

Lovely post - Carol, my daughter loves the MY STORY books and they have really sparked her interest in history generally. The diary form is great for children - I love Karen Cushman's My Name is Catherine, Called Birdy also. One classic you haven't mentioned, Penny, is Charlotte Sometimes - and Kate Saunders has done a more recent timeslip story also set in a girls' boarding school - Beswitched - which is excellent.

Thanks, Emma. Oh, and there's Kate Saunders "Five Children and It on the Western Front" as well! Just so many to choose from!

Penny I was thinking of Astercote only a few days ago. And I remembered the ghost of Thomas Kempe too. A couple of other timeslips I loved as a kid were Edward Eager's Half Magic which is a little like an American version of Five Children and It only without two of the five children and without the It.

Other places, other times - so alluring to write and read about - I'm not sure what the bit of us is called that longs for those kinds of books, but it's definitely there!
The Spirit of the Place sounds excellent - looking out for that now!

Thanks for the mention of 'West of the Moon', Penny! I was and still am a huge fan of Rosemary Sutcliff's books about Roman Britain (they seem to be considered too difficult for modern children, which I think is a shame - it depends on the child!) and I've loved many of the other books you name in this post, but I'd like to highlight your own very wonderful 'A Boy Called MOUSE' set in Victorian theatreland. I totally loved it!

Thanks for the reference to Stravaganza too! (I am slowly catching up with HG posts). Why does everyone say there is no market for histfic for children when there are all the wonderful books you mention?