The Paraclete, by Louisa Young

I went to church at the weekend, itself almost a historical activity in England. It was a grey and beautiful Somerset church, which exquisite windows from about 1912, in a pre-Raphaelite style. There were eight in the congregation, including my friend and I who were mostly there because her mother,  for sociable, widowed reasons, plays the organ. We sang Come Down Oh Love Divine, and giggled like schoolgirls at the bit about lowliness becoming our inner clothing, and o'er its own shortcomings weeping with loathing. The shortcomings of underwear!

The Vicar, Stephen, was kind, involved, and sad about the death of the wife of the vicar in the next Parish. His sermon, he said, was going to be personal. He told us he had visited his friend, the other vicar, and that the phrase which had stayed with him all through this grief-filled week was: 'I will not leave you comfortless'. He said he had tried and failed to find it in his Bible (I think the vicar doesn't google: it's John 14, 18, since you ask: the same chapter as my father's house having many mansions, and 'I am the way, the truth and the life'). But in looking for the phrase, he had come across the term Paraclete.

Of course he made a 'No, not parakeet' joke. Of course one would hear it as parakeet.  My daughter, who's in the middle of her finals, did this morning when I said on the phone that if she needed me I would fly to her side like a Paraclete. The use of 'fly' was probably a distraction.

'Is it a kind of cleat for parachutists to attach their ropes to?' suggested Gavin, who's a sailor.

Nope. It is a Comforter. It is someone who when called will come to you, and speak for you. In Christianity it is mostly the Holy Ghost; in Islam both Jesus and Mohammed are Paracletes. The nearest it comes to being a bird is the Dove. 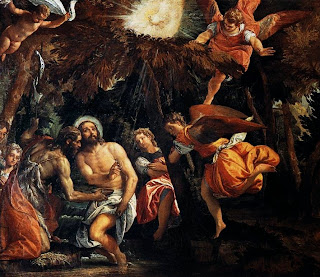 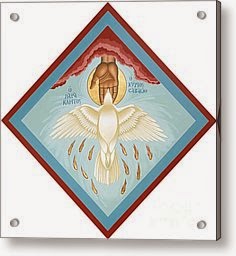 The word is from the Greek παράκλητος (paráklētos), which can mean one who comforts or consoles, one who encourages or uplifts, or one who intercedes on our behalf as an advocate in court. It is passive: 'called to one's side'. The Called One.

I got a bit teary at this stage. The Called One! The one you'd call. The friend you'd ring. Not in a phone-a-friend/Who-Wants-to-be-a-Millionaire way, but in the fly-to-your-side during finals, strap-your-ropes-to-me, will-not-leave-you-comfortless way.

We looked the word up over Sunday lunch, and used it all weekend. 'Be a Paraclete and pass my cup of tea would you?' 'You've always been my Paraclete, darling!' By Monday night somebody (it may have been me) had uttered the phrase 'Paraclete me, baby!' and we had discussed at length what a pleasure it was both to have a Paraclete to call on, and to be called on as a Paraclete. Because of the trust involved, the vulnerability and the honesty, it becomes something of an honour.

If you google Paraclete, you get a lot about the early Christian history and a fair amount, alas, about a brand of plate-carrying body armour, which is pretty . . . ironic? Doves and body armour? 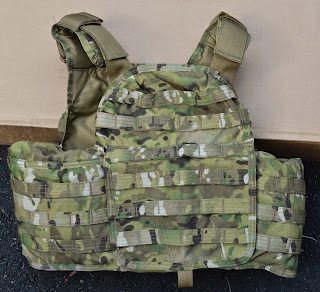 But it is a beautiful word. Might we not bring the word back, in something like its original meaning? The one you'd call?

Try it. I think it might turn out to be useful.

May replace callipygous as my new favourite word, although the two could perhaps be hitched together.

A callipygous paraclete? I imagine she might be called to peoples' sides quite a lot.

Thanks for this post Louisa - and you've reminded me of the existence of Thomas Keneally's extremely funny novel 'Three Cheers for the Paraclete'. If you (and others) haven't come across it, you might enjoy it.

It is truly a beautiful word, and I am ashamed to admit that for years, while I was still an Anglican, I sang the word in hymns and never looked it up - so I am very grateful to you for telling me what it means.

I once lived in a former convent in Zimbabwe, in which the sisters had belonged to the Order of the Holy Paraclete, originally from Whitby Yorks. They had left behind their tablecloths, embroidered with 'OHP' - we thought at first it meant 'Over-Head Projector'!