When I was a child, as a change from playing Cowboys and Indians, we would charge about the woods and fields being Roundheads and Cavaliers. I was always a Cavalier, a choice based entirely on feathered hats,  swashbuckling outfits and Captain Marryat's The Children of the New Forest. A book I absolutely loved. I couldn't imagine a more wonderful life: living in the forest, hunting deer, feasting off venison and hiding from pesky Roundheads who were obviously The Enemy. 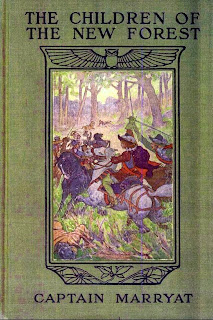 As I grew older and wiser, I changed my allegiance. I became a Roundhead. I first encountered the Putney Debates when I was studying history at university. I was struck most forcibly by the radical nature of the ideas being discussed and that they were being debated openly by men from all walks of life, from gentlemen landowners to labourers, button sellers and shoemakers, all with a voice that would be heard.

The debates took place in St Mary's Church, Putney in the Autumn of 1647. This was at the end of the first Civil War period. The forces of the King had been defeated. The New Model Army had triumphed. So much so, that when parliament voted for the army to be disbanded, they refused to go. Instead, the rank and file elected their own representatives, 'agitators', to resist any moves to send them home or to Ireland. A General Council of the Army was established which was made up of not just senior officers but also the agitators, elected by the rank and file, and junior officers from each regiment, so that ordinary soldiers would be heard, their opinions, respected,  alongside 'grandees likeSir Thomas Fairfax and Cromwell. 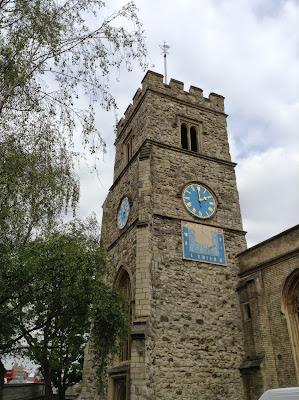 The General Council of the Army met at Putney to agree terms with the King which they set out in The Case of the Army Truly Stated but discussion of this submission led to a much more radical paper: An Agreement of the People. 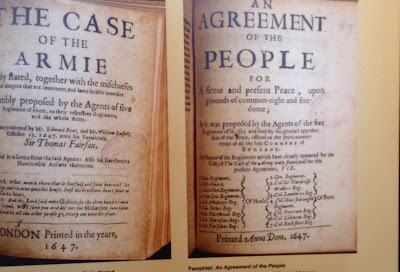 The radical ideas in the Agreement were the subject of the Debates that subsequently took place at St Mary's Church. Ordinary soldiers, sent as the delegates from their regiments, sat alongside junior and senior officers. Even civilians, Levellers, were allowed to participate in open and free debate. No army has ever behaved like this, before or since, and the ideas that emerged from the debates were quite extraordinary for their time, or any time. Colonel Thomas Rainsborough expressed the core of the matter most memorably.

Really I think that the poorest he that is in England hath a life to live as the greatest he; and therefore truly, Sir, I think it's clear that every man that is to live under a Government ought first to put himself under that Government; and I do think that the poorest man in England is not at all bound in a strict sense to that Government that he hath not had a voice to put himself under...

These words call to us down the years, sounding modern to our ears, as simple and clear as on that day in October 1647 when they were first expressed. 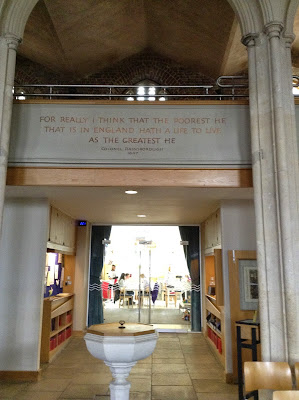 The voices that argued so fiercely for freedom and equality on those Autumn days in Putney were soon stifled and repressed. The Debates fell out of history, the transcripts only discovered 250 years later in the archives of Worcester College, Oxford. Not long, ironically, after the franchise demanded so fiercely and eloquently all those years before was finally granted with the Representation of the Pepole Act 1884, and still not every 'he' was included and certainly not every 'she'. Universal adult suffrage was not achieved until 1928.   . 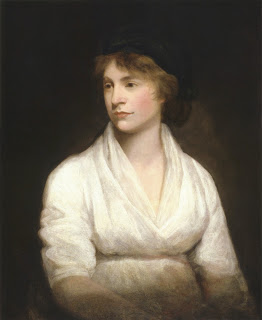 Those voices might have been stifled, but they were not silenced. They joined a chorus of radical dissent that ran beneath the surface of British history like an underground river, sometimes louder, sometimes softer, but always there, deep and strong, reaching back to the Lollards and on to the Known Men of Tudor England, the Dissenters and Puritans of Elizabethan England, the Levellers and Diggers, the Quakers who would bow their heads to no man and on to the American Revolution, to the Corresponding Societies in London at the time of the French Revolution, given open expression by Tom Paine and Mary Wollstonecroft, running on to the Luddites and Dark Lantern Men, the Tolpuddle Martyrs and the Chartists and finally emerging with the ILP when Keir Hardie took his place in the Parliament that had denied the demands of the New Model Army all those years before. The work was not finished, the cry was taken up by the Pankhursts and the Suffragettes until every she was given her representation. 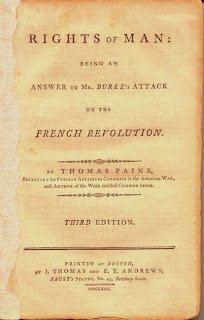 Standing in the quiet of St Mary's in Putney, surrounded by the passion of the past,  I thought it ironic  that, after the most recent exercise in democracy, we should find ourselves governed by a small clique from a wealth and privileged elite, most of them closely linked to the aristocracy. Roundhead or Cavalier? Do we have to even ask? You get what you vote for, I suppose.

'A chorus of radical dissent that ran beneath the surface of British history like an underground river' - this is wonderful Celia. Lets home the river swells again soon.

Yes, Clare, it is wonderful. I also hope for Britain that dissent finds its strength again before too long. Bravo, Celia.

Lord, Celia, this makes me want to cheer. That underground river runs further back, to the peasant's revolt...

I think a loudspeaker car should be driven round the streets, playing Rainsborough's words: 'No man was brought into this world either booted and spurred to ride or saddled and bridled to be ridden.'

It was an astonishing period of history - and many were arguing for full equality of women.

Such an inspiring post…and I love the loudspeaker idea! On the sides of the buses too?

But that river is still flowing, and I do believe that the more that is known about the ways in which people in the past have resisted the status quo, the more people in the present will feel they have a stake in the future.

Yes, indeed, Susan and Lydia - into the deep past and into the future those voices were not and will not be silenced.

Great post - and let's keep remembering that a majority of the population did NOT vote for the current government, and it's only the lottery of the first past the post system that gave them their slender majority. And Sue, thanks for pointing out that the idea of women's equality was current in the 17th century. Really hard times lie ahead, but we must try and use whatever opportunities we have to keep alive that flame that Celia has written about so powerfully.