Welcoming the May in Oxford - Katherine Langrish 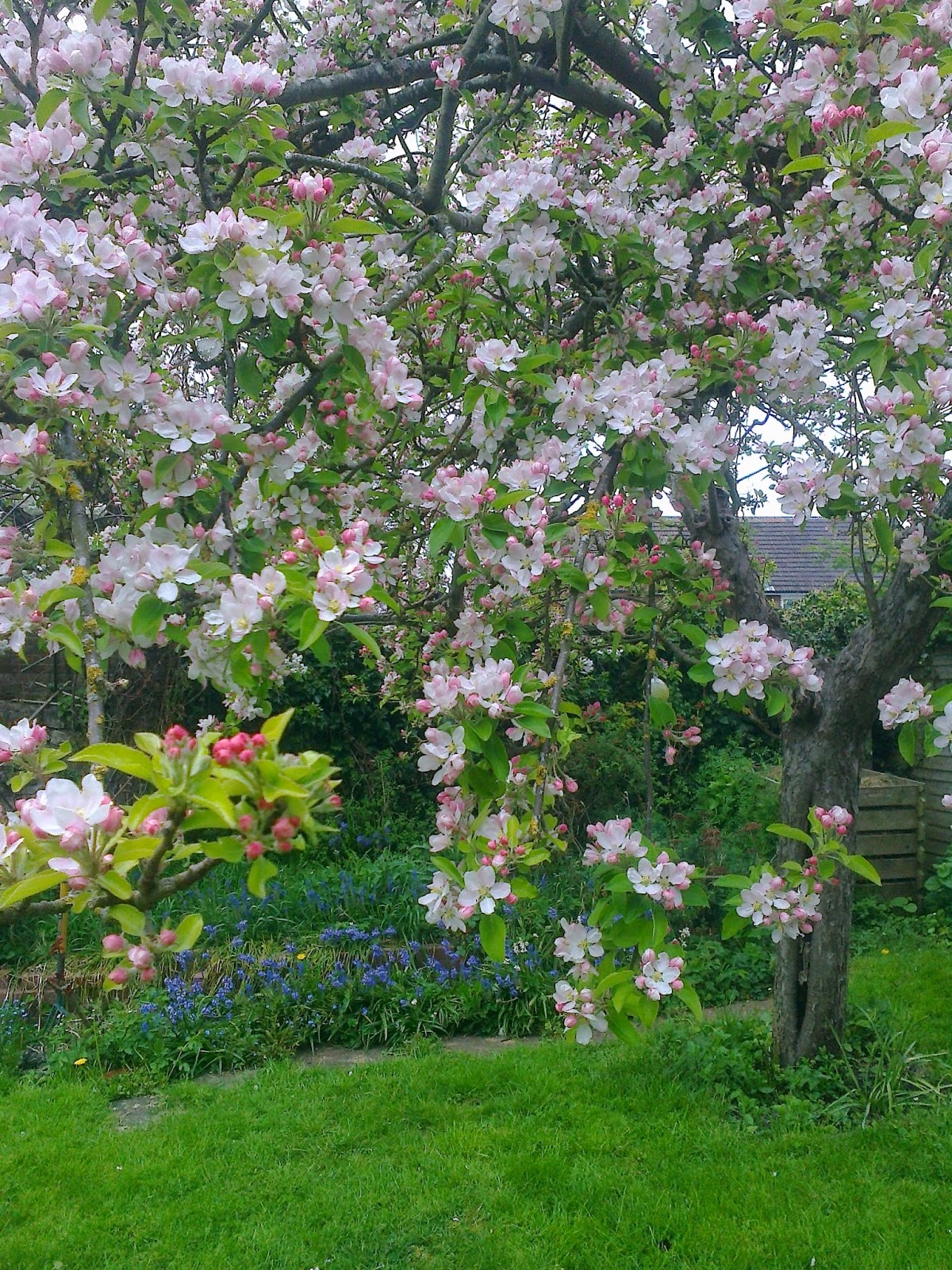 So on the First of May we got up in the grey twilight at 4.45am and drove into Oxford to listen to the choirboys singing the May in from the top of Magdalen Tower.

The sky was crimson, every moment changing and brightening towards amber and gold. We found a parking place somewhere near the station and hurried up through the town, which was strangely awake for such a time in the morning. Scattered pedestrians striding purposefully. Cyclists creaking by on ancient bicycles. Groups of worse-for-wear students who’d been up all night, noisy, laughing, hugging one another, stumbling along. Bliss it was in that dawn to be alive, but to be young… All of us heading the same way and for the same reason.  Kebab and burger vans on Queen Street were doing a great trade. The air was chill, the buildings still shadowed. Towery city and branchy between towers, cuckoo-echoing, bell-swarmèd, lark charmèd, rook-racked, river-rounded… On the High, a homeless man sat in a college doorway and watched the crowd passing downhill towards Magdalen College and its bell tower. 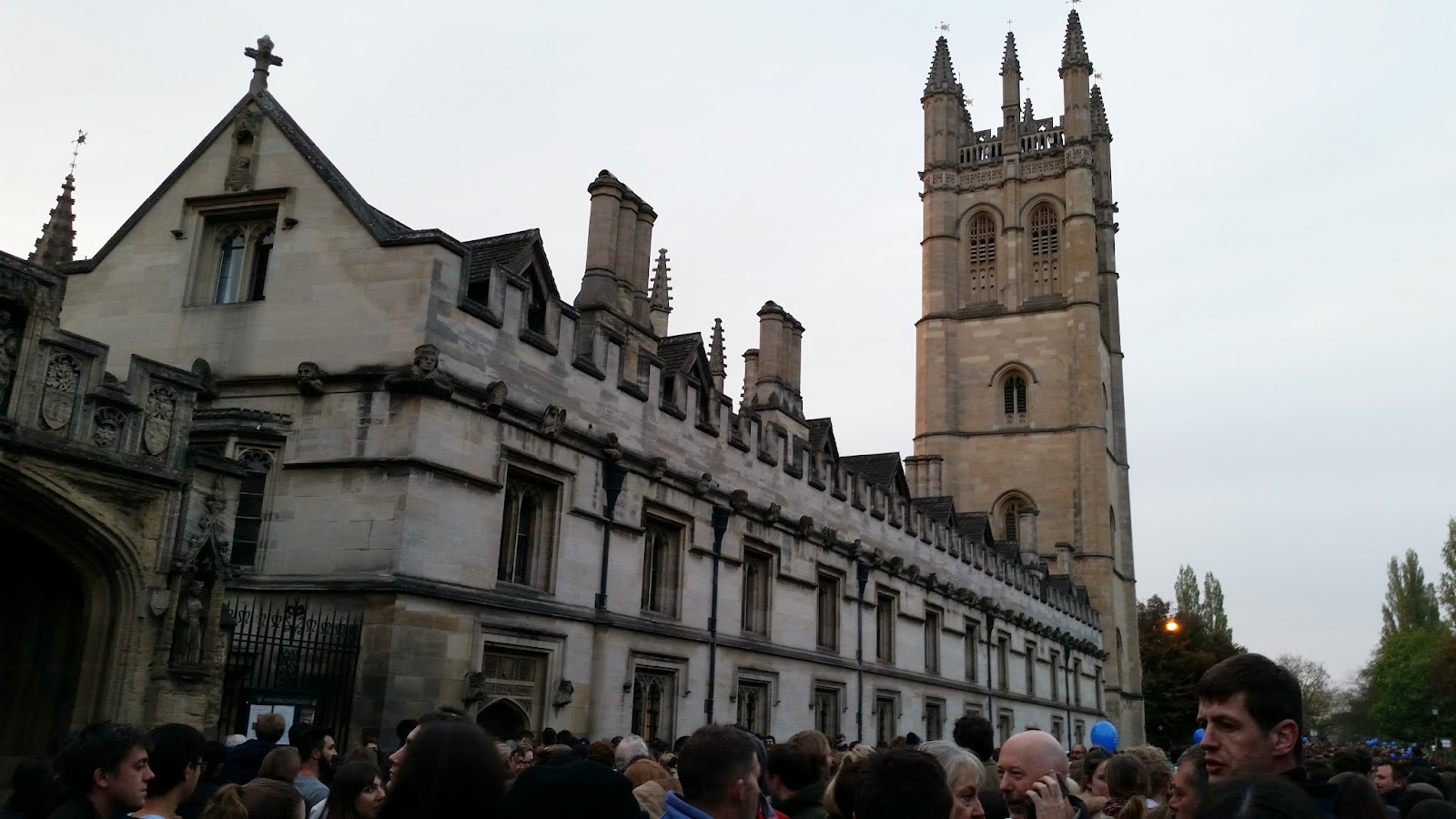 No one is quite sure, it seems, how old this ceremony is, but it’s been going on for many hundreds of years. Every year at 6am on May Day, the choir of Magdalen College climbs to the top of Magdalen Tower to sing from the roof to celebrate the spring – first the Hymnus Eucharisticus and then English country songs and madrigals.

As the crowd around the base of the tower became thicker, we came to a halt among a happy bunch of May morning sightseers – many in May costumes, crowned with real flowers and greenery. Tipping our heads back, we could just see the white robes of the choir moving between the finials of the tower top, and imagine the scene up there as Holman Hunt depicted it in his painting ‘May Morning on Magdalen Tower’ (1888-90). 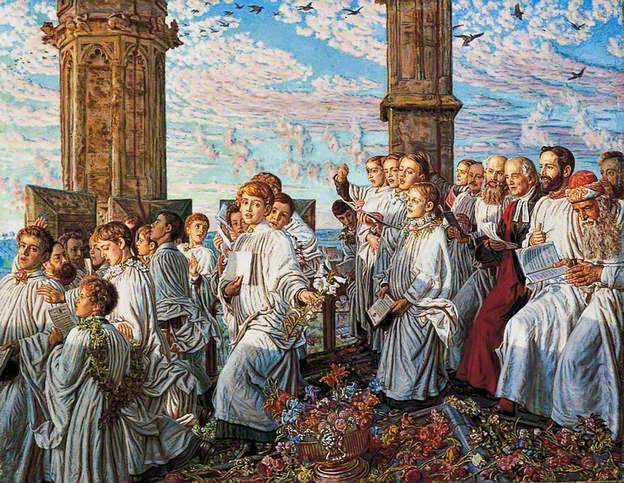 This must be the most popular of Oxford’s colourful college traditions. Some are stranger than others. All Souls (full name: The College of All Souls of the Faithful Departed) for example, owns to a custom as weird as anything out of Gormenghast: the Hunting of the Mallard. Once a century, the respectable Fellows of this wealthiest of colleges partake of a feast followed by a crazy ritual in which, led by a ‘Lord Mallard’ carried in a chair, they parade through the college with flaming torches in pursuit of a man carrying a wooden duck tied to a pole. This is to commemorate a huge mallard which, startled by workmen digging a drain, supposedly flew out of the foundations when the college was being built in 1437.  Whilst parading, the participants sing the Mallard Song, which dates from about 1660.

The Griffine, Bustard, Turkey & Capon
Let other hungry Mortalls gape on
And on their bones with Stomacks fall hard,
But let All Souls’ Men have the Mallard.

I have sometimes wondered, if Mervyn Peake knew of this ceremony, whether it inspired any of Gormenghast’s strange rituals, such as the ceremony to Honour the Poet.  Barquentine,  Master of Rituals, outlines the requirements to Steerpike. Have the cloisters been painted the correct shade of darkest red? Has the Poet completed his poem? Has he been told about the magpie?

‘I told him that he must rise to his feet and declaim within twelve seconds of the magpie’s release from the wire cage. That while declaiming his left hand must be clasping the beaker of moat-water in which the Countess has previously placed the blue pebble from Gormenghast river.’
‘That is so, boy.  And that he shall be wearing the Poet’s Gown, that his feet shall be bare, did you tell him that?’
‘I did,’ said Steerpike.
‘And the yellow benches for the Professors, were they found?’

All Souls’ Mallard ceremony was last held in 2001 and so will not be held again until 2101, but the song (which has six verses) is apparently still sung twice a year. I don’t know if the Fellows have re-included the fifth verse which was ‘expunged on grounds of decency’ in 1821 – but most 21st century sensibilities will find it enjoyably ridiculous rather than obscene. Anyhow, no one prepared to canter through college after a duck on a pole has any right to complain.

Hunting the Mallard is a ceremony exclusively for the lofty Fellows of All Souls College, but the Magdalen College ceremony is for everyone, town and gown. As we watched, the corner of the tower slowly glowed in the sunrise. The clock chimed six. The crowd, five thousand strong by now, hushed. The chimes faded and the choir at the tower top began to sing. Their voices were amplified – and for a moment, braced as I’d been to listen for the high, clear, distant notes, I was disappointed. Then I realised that it was the only practical solution, given the numbers waiting below. And it was still lovely. 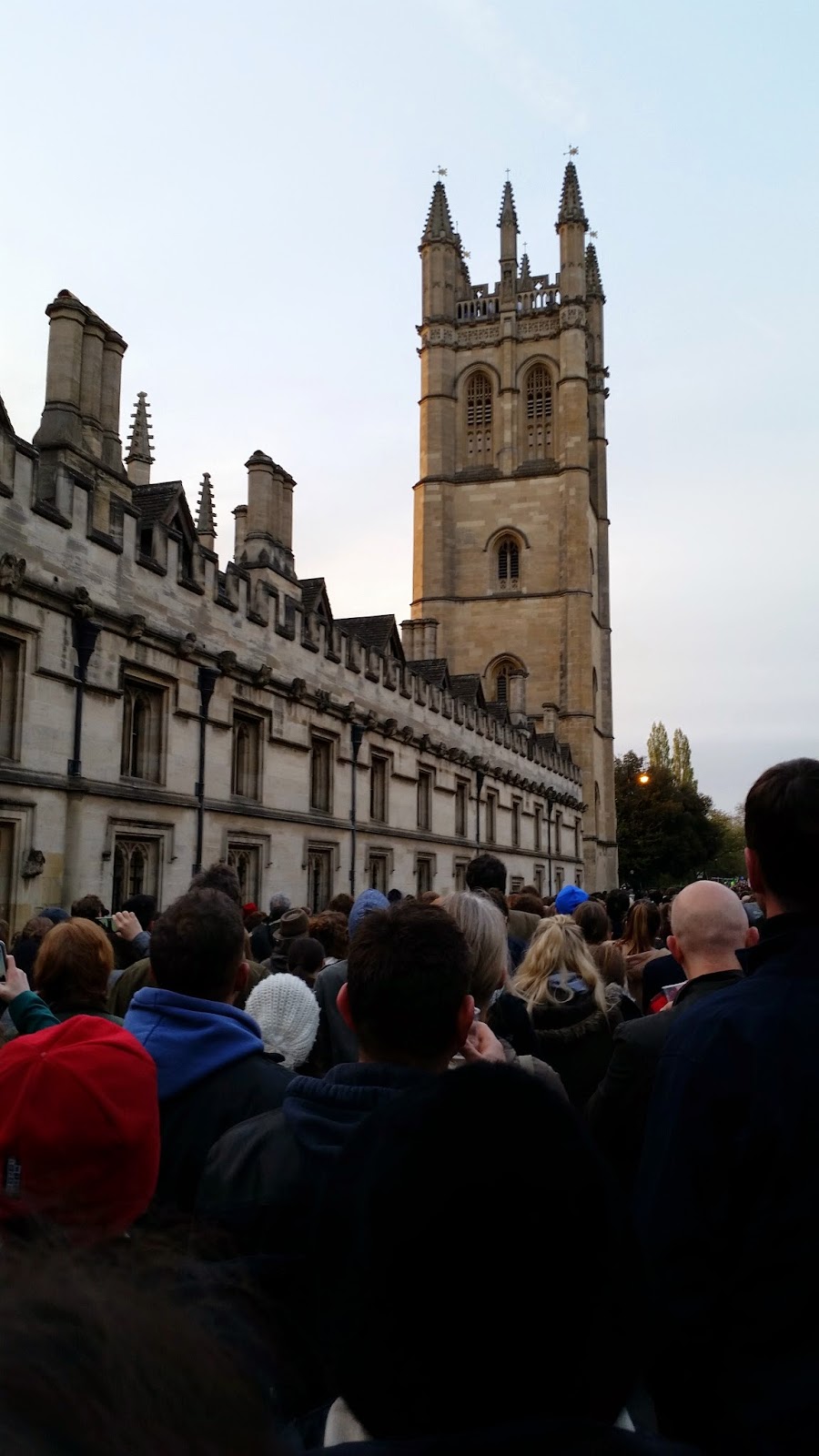 After the Latin hymn, a prayer was read thanking God for the light of morning, remembering St Mary Magdalene and the women who were witnesses to the resurrection of Jesus at the break of day, and praising God’s creation Mother Earth with all her spring flowers. As a happy combination of Christianity and nature worship, it seemed faultlessly medieval. Then the choir sang Thomas Morley's songs ‘Now is the Month of Maying’ and 'My Bonnie Lass She Smileth' – and it was over, the sun was up, and it was time to wander back through the city with the rest of the teeming multitude and find somewhere to eat breakfast. Our attention was caught by someone waving aloft a hand-written placard declaring the existence of  ‘Free Bacon Sandwiches at the Wesley Memorial Church on New Inn Hall Street’ – but that seemed too far away from the action. 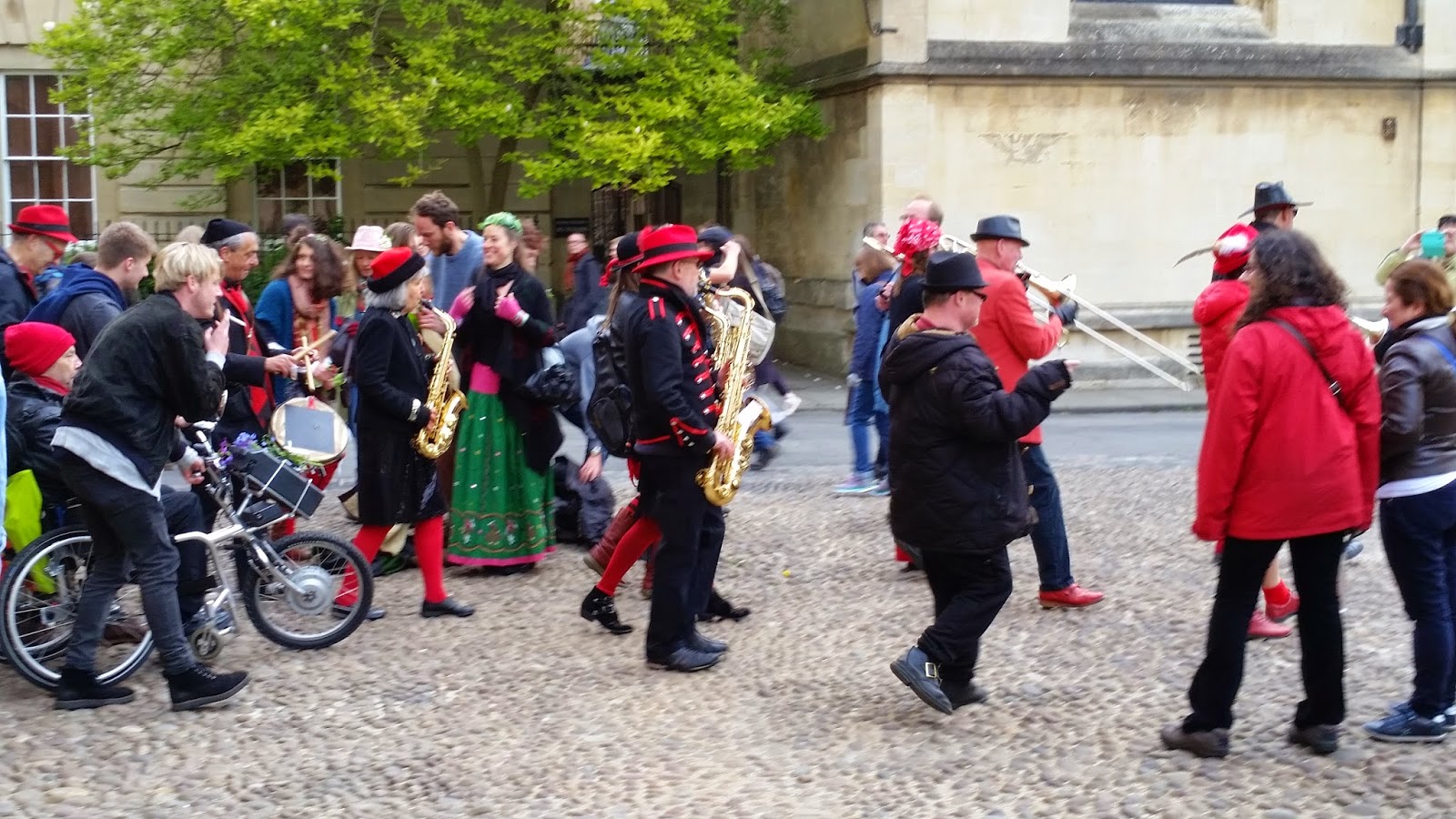 The thump of a big drum lured us into Radcliffe Square where we found a colourful band playing oddly dirge-like marches on the cobbles around the Radcliffe camera. Then we looped back to the High for an expensive but delicious breakfast of scrambled egg and smoked salmon, bacon rolls and coffee. And one Bucks Fizz, which we shared between us. It was still only 7am. 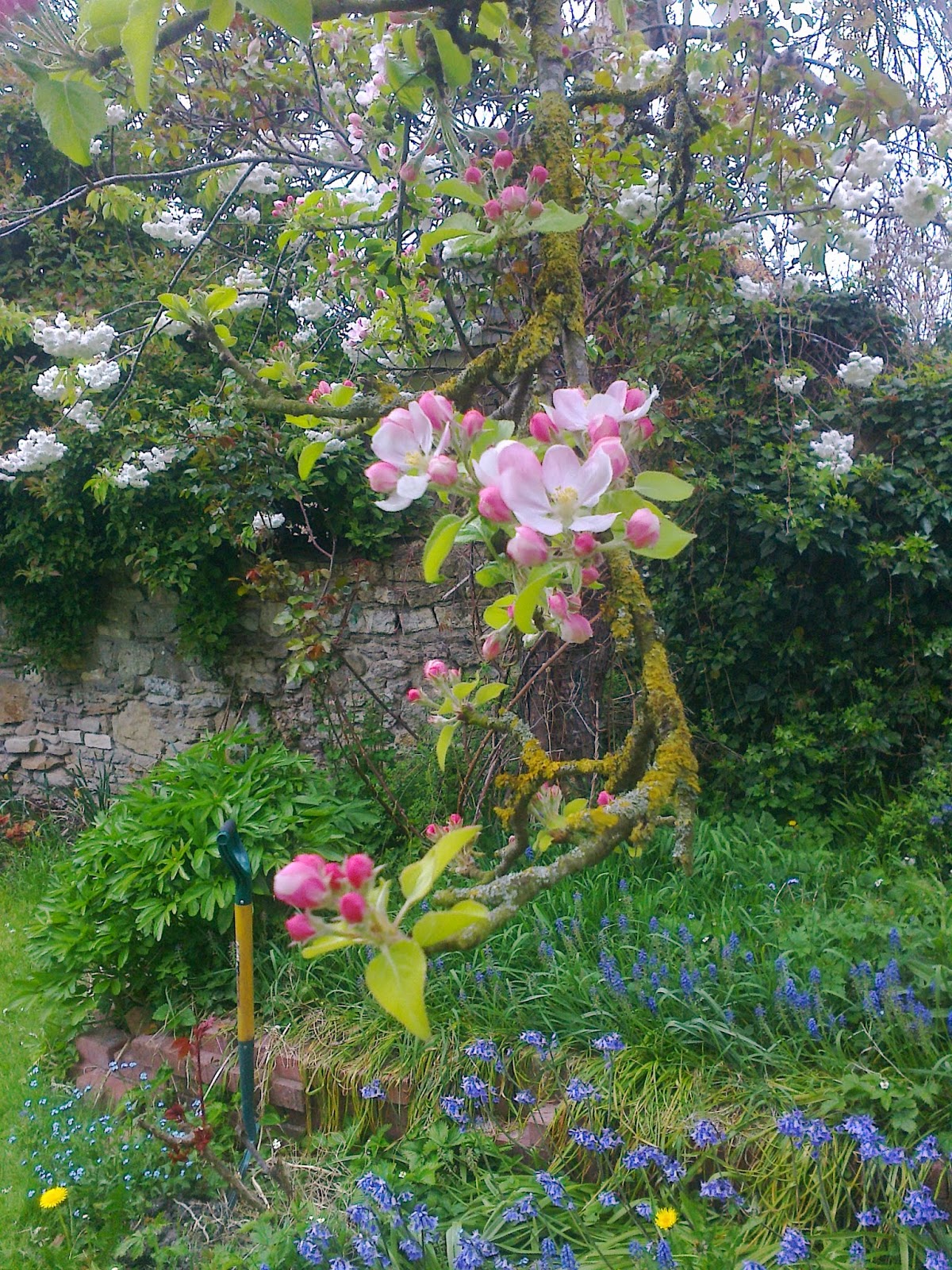 Lovely! I'd never heard of this custom. And great pictures of the blossom!

Oh May morning in Oxford - you taken me back about 40 years! One of those quietly wonderful traditions that, somehow, has survived without drowning in the necessity of tourism.

Lovely, Kath. And, like Sue Purkiss, I'd never heard of this.

How very lovely, what a joyful start to May.

Thankyou all! Come next year!

how lovely! I had heard of the May Day tradition, but never of the Mallard Hunt!

Lovely blog indeed! I have been to May Morning (once, when I was young; there was a bagpiper on the porch of the Examination Schools), but haven't attended Mallard Day. It sounds almost more Terry Pratchett than Mervyn Peake, and one can't help imagining Nanny Ogg there, lowering the tone of the occasion..

Leslie, my first thought reading about the Mallard was "So PTerry didn't make it up!" (there is a similar event in (I thik) 'Unseen Academicals')

He had a very wide-ranging knowledge of folklore and customs, as well as wit and wisdom and agreeable penetrating cynicism..