Music while you work by Imogen Robertson

I like to have music playing as I work - it tends to quiet down my non-writing brain. You know the bit I mean; the bit that, just when you are crafting a particularly beautiful sentence starts wondering if there’s anything to eat in the fridge, or suggests you check your email in case some really important message has arrived.

It needs to be shushed and it seems to like classical music. While writing the 18th century Westerman and Crowther novels I listen to Boccherini and Bach (JS. and CPE.), when I wrote Paris Winter there was a lot of Chopin going on, but the current novel is set in the mid-17th century and all of a sudden my late baroque is just way too modern, so I have gone back a hundred years or so and found, to my delight, the work of William Lawes, Matthew Locke and John Jenkins.

Lawes was killed during the civil war, Locke survived it and went on to be composer for violin to Charles II. He was followed in that post by Henry Purcell. And then there is John Jenkins. He was the son of a carpenter and apparently a remarkable player of the lyra viol, a beautiful sort of bass violin but with more strings and it was designed to play chords as well as single melodic lines. Jenkins too survived the civil war, and during the Protectorate he composed an extraordinary amount of music for amateur musicians while living in East Anglia. It’s that music I am listening to now, and it has such elegance, delicacy and range of feeling, I hope something of it will seep into my prose. 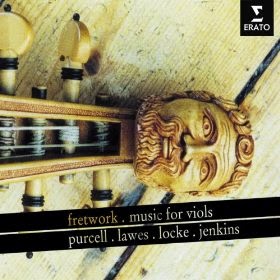 You can hear the consort music composed by Lawes, Locke, Jenkins and Purcell for viols beautifully played by Fretwork on this collection. Enjoy.

I'm right with you there! :-) Playing music that is appropriate to what you're writing does help.

Thank you for this post - I'm off to listen!