Monsters and Mermaids in the Orchard - Michelle Lovric

A few weeks ago I received a delightful letter from Mariagrazia Dammicco, garden historian and writer. In her company, I have spent many idyllic hours over the years learning about the historical and hidden gardens of Venice, courtesy of tours organised by the Wigwam Club for Historic Gardens, of which Mariagrazia is president.

Many of the scenes in my stories are set in these Venetians gardens, so naturally I sent Mariagrazia my first children’s book, The Undrowned Child, as soon as it was translated into Italian by Salani in 2011. The book’s protagonists are greedy foul-mouthed mermaids, a monster in the lagoon, the ghost of an historical traitor and some extremely clever children.

Mariagrazia’s letter said: ‘Sometimes fruit needs time to mature … and so finally it seems that I will be able to present your book in Venice, or rather propose a reading of it and a workshop for children in the great garden of Thetis at the Arsenale.

﻿ ‘But let’s do this in order,' continued Mariagrazia. 'Wigwam was recently asked by the Comune of Venice and the Garden of Thetis to organise some events for the public, and in particular for families and children. The first day will be Saturday April 25th, an open day at the Arsenale. There will be workshops, games, activities in the orchard, tastings … and I immediately thought of your book: because Thetis was a marine divinity (like your own mermaids) and because we will be at the Arsenale, where you set some epic scenes of your book.’

The actor, musician and artist Oreste Sabadin, she told me, had offered his voice and his clarinet to perform a musical reading of some extracts of the book. And Mariagrazia’s daughter, the artist and photographer Francesca Saccani, would work with the children to paint watercolours of monsters and mermaids. Francesca and Anna Saccani had designed Wigwam’s first calendar.

I leave you to imagine how excited I was about this. Especially when I saw the beautiful poster. 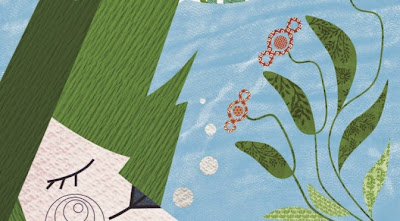 Now the Italian edition of The Undrowned Child is called Il Grimorio di Venezia … roughly translated as The Magical Almanac of Venice. It has a rather provocative cover. 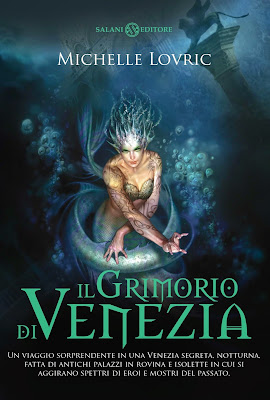 Don’t you think this mermaid looks as if she has really lived? Lived in ways beyond the realm of the intended 9-12 readers of the book? Or is it just that I need to get out more? (I’m sure you’ll tell me.)

I suppose the ‘Papy’ market must be catered for in Italian bookshops. Indeed I’m increasingly pleased to note that most Italian men still seem quite fond of mature female breasts and don’t go seeking androgyny or embryonic ages in their women. There used to be a wonderful programme on Italian television called Festa in Piazza, where the rustic set mimicked everyone’s dream idea of a village square. (I believe there is new decorating term called ‘Rough Luxe’, which would cover it). The piazza was accessorized with plastic plants and barely dressed beauties, gratuitously placed. The cameraman used his equipment as a heat-seeking device. It was always panning in on some mammaries, the more ‘prosperosa’ the better. We always knew if the alternative cameraman was working, because he was a thigh and buttock man. On his days, we really got to know the loins and rear ends of the ladies on the show. 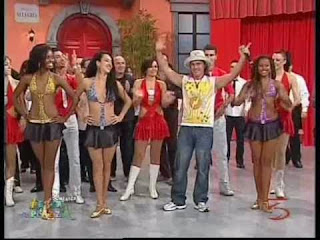 The audience were mostly in their later middle ages, as were, delightfully, many of the performers, and the songs. At moments of extreme sentimentality, the audience would stream onto the stage and start dancing, becoming part of the phenomenon, and the breast-favouring cameraman enjoyed himself with the mature voluntary bosoms as much as he had with the paid ones. 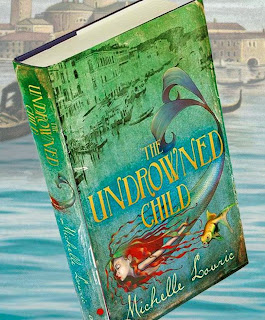 Anyway, perhaps this long digression explains the difference between the Italian and the British cover (left) of The Undrowned Child, which takes a more innocent approach to the idea of a teen mermaid in a hist-fic book.

Getting back to exciting news that my book was to be presented in Venice … naturally I planned to be there, and secretly hoped to be asked to judge the best mermaid drawing, or even just to paint a mermaid of my own. I couldn’t help noticing that Oreste Sabadin was a ferociously handsome man.

I rehearsed my impromptu speeches and off the cuff jokes in the bath for a week; I’d chosen the outfit; I’d had my hair cut and my toenails were freshly gelled in the kind of courtesanly red that the Italian cover’s mermaid would have favoured, had she owned toes to paint instead of a tail.

As it happened, a last-minute logistical hitch meant that I was unable to get to Venice but I received reports of the event in image, word and sound. I am pleased to report that this was an occasion properly dedicated to the imagination, to innocence and to children - and to gardens.

My lovely friends, the artist Deirdre Kelly and the architect Rosato Frassanito sent me texts, emails, photos and videos all through the performance, during which Oreste read from the book, and played, 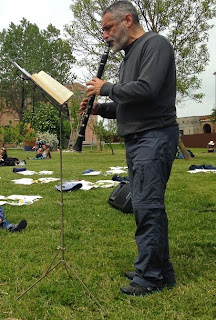 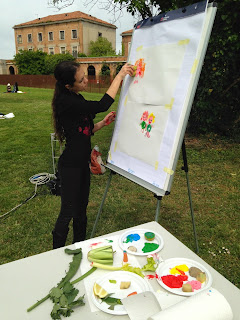 The children sat around in a neat semi circle. I would love to show them but it’s never a good idea to publish photographs of children on the internet, sadly. With permission, however, I can show you a talented young Venetian friend of mine, Martina, who attended the event. 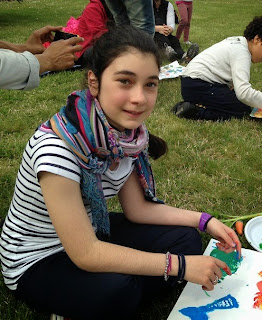 Sheets of paper were also laid out for the children, with generous dollops of colour and vegetable paintbrushes. 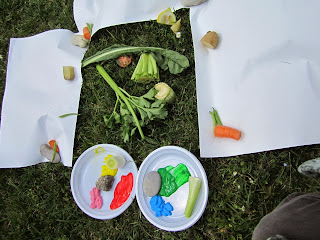 I was informed of everything minute by minute - even my own round of applause at the end.

So, sitting looking over the Thames, I could feel myself by the lagoon in Venice.

Many, many thanks to all involved.


You can learn more about the work of Wigwam, and find a schedule of their private garden openings and visits here 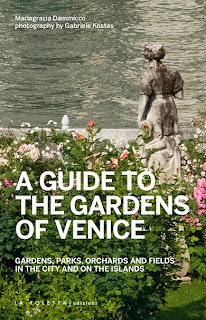 Mariagrazia Dammico’s latest book is A Guide to the Gardens of Venice, La Toletta Edizioni 2013.


Photos by Rosato Frassanito and Deirdre Kelly, the collage artist, who is currently preparing a new exhibition of her work for the Scuola Grafica in Venice.

What a lovely Undrowned Child event that sounds, Michelle! It must have been rather disappointing not to be there yourself, even if all went well.

Enjoyed your cultural background - or should I say foreground? - which reminded me of the obligatory scenes in "Montalbano". Also, I rather think that Italian mermaid adds a hint of menace to the title that may well attract a wider range of readers, even though the original cover is so beautiful and dreamy.
Thanks for more tales from Venice, and the information about the gardens.

Lovely event, Michelle. So sad that you couldn't be there in person - but how wonderful that your friends sent it to you virtually!

The event sounded wonderful - and I love the idea of using vegetables as paint brushes!

Wow! Sorry you couldn't enjoy all that in person, and loved the digressions.

Well - I certainly enjoyed that, even though I wasn't there, and it sounds as if you did too! What a lovely event!

What a delightful blog - and I'm glad, too, that you were able to enjoy the event virtually, when you weren't able to go yourself. I hope next time, you'll be there!