'Amy, wonderful Amy...' - a homage to my aviatrix heroine 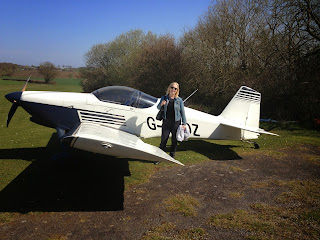 With the 85th anniversary of Amy Johnson’s record-breaking flight from England to Australia having passed a couple of weeks ago, and the 75th anniversary of her death coming up next year, it seems an opportune moment for me to attempt my own ‘homage’ to the great aviatrix, by taking to the air myself. This, you understand, was in the spirit of research, since I’m currently midway through a novel - Time of Flight - which is set in 1931 and which deals, amongst other things, with the era’s craze for flying. And so, donning an imaginary leather jacket and flying helmet, I climbed into the cockpit of a decidedly modern version of the Gipsy Moth in which Amy flew the 11,000 miles from Croydon Airport to Port Darwin. 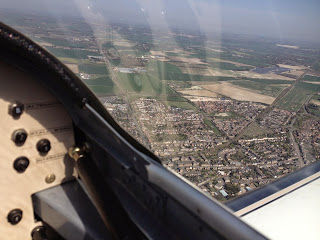 My own flight would last no more than an hour, all told - of which I would take the controls for only a few minutes. But I can honestly say that at the end of it my admiration for my distinguished predecessor had increased a thousandfold. Not for her the luxuries of a closed-in cockpit and state-of-the-art modern technology. She did her flight in a machine made of wood and canvas, with a cockpit open to the elements, and very little in the way of instruments to guide her - not even a radio. She crossed oceans, and battled sandstorms, fog, and Monsoon conditions - as well as surviving several near-fatal crashes. My own flight, though it felt just as daring to me, was a tame affair by comparison. 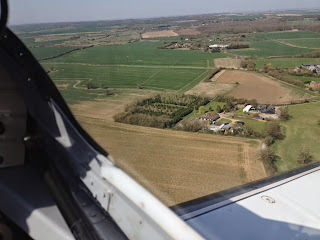 If I can claim one thing in common with my heroine, it’s that I’ve always believed in taking on challenges - whether it’s white-water rafting on the (very turbulent) Orinoco River, or giving a talk on the Modern Novel to a packed audience at a literary festival with no more than twenty minutes to prepare. So I like to think that - even though I’m nowhere near as brave or as resourceful as Amy Johnson - I can now tip my hat to her remarkable spirit, and feel I’ve experienced something of what she felt, as she took to the skies, that May morning in 1930. 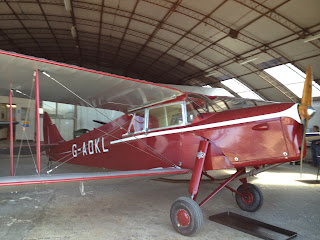 I’m hoping to follow up my ‘maiden flight’ with a slightly more authentic experience - piloting (or at least co-piloting) a 1935 de Havilland Hawk Moth, which is a somewhat more sophisticated version of the plane in which Amy first achieved fame. Here’s a photo of me sitting in the Moth, looking much more cheerful than I suspect I’ll feel when we eventually get off the ground… The things one does for Art. 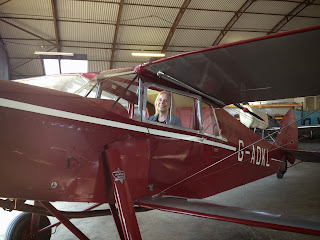 I didn't know anything about Amy Johnson until I read Anne Rooney's wonderful story about her in "Daughters of Time"...it sounds a fascinating era to sue for a novel.

I am researching some flying women at the moment, and took a flight in a glider last summer. You did much better than I - it seems I am a better writer than aviatrix!

I got my inspiration from Midge Gillies's 'Queen of the Air' - a brilliant book. Will of course check out Anne's book - especially as she is a friend and RLF colleague! My novel isn't about Amy Johnson as such - although she did work in the same office as my grandfather, on whom the central character is based!

PS I'd also call myself a better writer than aviatrix, Clare!

Looking forward to your book, Christina.
I have written one, about a girl who wants to fly like Amy, called Gipsy Moth.