Adventures in Europe with Patrick Leigh Fermor: by Sue Purkiss

In 1933, Paddy Leigh Fermor was eighteen. The son of separated parents - his father was a scientist working in India, his mother had brought him up by herself in London. He had  virtually no money - he had an income of a pound a week, and though he was so young, he already had debts.

He had been expelled from school The culminating incident occurred when he was caught out of bounds holding the hand of a very pretty grocer's daughter, but there had been lots of others. He was a daredevil, and what was more, he was a charismatic one, so he led the other boys into trouble too.

Far away in India, his father puzzled over how Paddy was going to earn a living. He went to a crammer's, but he was never going to get into university. He showed no aptitude for his father's speciality, science. At length it was decided he should go into the army. However, Paddy soon realised that he didn't have enough money to lead the life he'd want to as a junior officer. He was having a high old time meeting bright young things, going to clubs, drinking and spending money he didn't have; but underneath it all, he was beginning to wonder what on earth he was going to do. Summer passed, and London was less attractive in the winter. 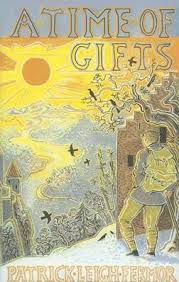 Then he had his big idea. He would walk 'from the Hook of Holland to Constantinople' - right across Europe - on his pound a week. He would sleep in barns, he would eat bread and cheese, he would meet lots of people, he would write about his travels.

And that's exactly what he did. Forty years later, he finally wrote up his notes in a trilogy of books about this journey, beginning with A Time of Gifts. It's a fascinating story. Of course, it tells of a lost Europe: a Europe which was as yet only just becoming aware of the growing threat of the Nazis. He managed to meet diplomats and members of the old nobilities, who gave him letters of introduction to others of their ilk; so although he often did sleep in barns or haystacks, wrapping himself up in his long warm coat, he also slept in castles and conversed with cultured intellectuals. (He was naturally gifted at languages, and took care to learn new ones as he went along.) He romanced village girls and aristocrats, finally falling in love with Balasha Cantacuzene, a beautiful Rumanian who was sixteen years older than him. They met in Athens in 1935, and after spending a few months in Greece, he went back with her to her family's estate in in Besserabia in Rumania. In 1936 when he was 21, he had an unexpected windfall - a gift of £300 from a godfather he had never met, Sir Henry Hubert Hayden. He learnt Rumanian, he translated books and poetry, he travelled. But Besserabia was under a different shadow from Western Europe; Soviet Russia wanted to claim it as part of the Ukraine. When the Ukraine had been collectivized in the early thirties, millions had died.


Paddy was happy with Balasha. But when, in 1939, she heard on her car radio that war had been declared, she knew their time together was over. Paddy left for England immediately and joined the Guards. (After the war, of course, the Iron Curtain came down; the consequences were dire for most of the friends Paddy had made, and he wasn't to see Balasha again until many years later. She and her family had suffered greatly, and it was a sad reunion.)

He didn't find it easy to conform to the discipline and routine of military life. But after a few months, the Intelligence Corps became aware of his fluency in French, German, Romanian and Greek, and realised that he would be useful in the Balkans. As ever, he did not shine in a conventional situation; but once he found his way into the resistance movement in Crete, he came into his own. The incident he became famous for was when, with a small group of partisans, he kidnapped the German commanding officer on the island, General Kreipe. It's not clear that this achieved any strategic purpose - but it became a legend, and probably the thing Paddy became most famous for. It says a lot about the kind of person he was that, as the little group was climbing a mountain on its way to the coast of Crete, where Kreipe was to be picked up by ship and taken to Cairo, the exhausted general gazed at the view and murmured a line from an ode by Horace. It happened to be one that Paddy knew, and he carried on the quotation.

The General's blue eyes swivelled away from the mountain-top to mine - and when I'd finished, after a long silence, he said: 'Ach so, Herr Major!' It was very strange. 'Ja, Herr General.' As though, for a long moment, the war had ceased to exist. We had both drunk at the same fountains long before; and things were different between us for the rest of our time together.
(Quoted in Patrick Leigh Fermor: An Adventure, by Artemis Cooper, p 184)

Years later, there was a reunion of those involved in the kidnap - including the general.

There are so many stories about Paddy Leigh Fermor - enough for a whole series of books. (A film was made of the Cretan incident, with Dirk Bogarde as Paddy. Paddy liked Bogarde very much, but was rather embarrassed by the way the film portrayed him.) Although we have had A Time of Gifts on our shelves for years - it used to belong to my mother-in-law - I had never read it. I'd glanced at it, but never been drawn in. Then, a few weeks ago, I came across a collection of letters between Paddy and Debo, Duchess of Devonshire: In Tearing Haste. I found this enchanting - and a perfect summer read - and I wrote about it here. The two obviously got on very well, but they were tremendously different - Debo hardly ever read anything, not even Paddy's books. They only became friends some years after the war, and I was so intrigued by this warm, flamboyant, charismatic character that I wanted to find out more about him. So first I read A Time of Gifts, and then I went on to Artemis Cooper's excellent biography.

But really, there isn't a moral. I just wanted to tell you about someone who had a really interesting life, and sounds as though he was a very charming person.
Posted by Sue Purkiss at 02:00

Brilliant post, Sue! Thanks for reminding me about him. I read his book Mani several years ago.

Two fun trivia facts. The Richard Linklater film Before Midnight features a character called Patrick who is based on Paddy. They even filmed this movie at his famous seaside villa in Kalamitsi, Greece. Another fun thing I discovered just last week was that the Classicist CM Bowra wrote two rude poems about playboy Paddy which were published after his death. Of course you wouldn't want to read them, but if you did you could find them HERE

Mean poems! Yes - I think Paddy was a consultant to the film. Must have been odd! Mani sounds like a wonderful place.

Thank you for this!

I loved this post. He is one of my heroes and when I first started travelling in my very early twenties, sleeping rough, ending up in fields full of goats , getting arrested in Yugoslavia (as it was then) etc, I always liked to fancy I was on the path of Paddy. I rarely ate with the aristocrats though! His writing is wonderful, so full of life.Thank you for a post that has really lifted me.

Carol, thank you; yes, I think that's the thing that most appeals about him - that he's so full of life. Very bouncy, very curious, very friendly - a bit of a Tigger!

I really enjoyed this post, Sue. Leigh Fermor was a most interesting man and obviously had a great deal of charm. However, a pound a week wasn't nothing - it was more than the average miner's weekly wage in the 1930s.