In the Cabinet of Curiosities, with Laurie Graham


Any guesses what this is? If I didn't know better I'd have said it was something used in the construction of bagpipes. Let me help you get to the bottom of this. It is an item of apparel: a  health bustle (so-called) that dates from the mid 1880s.

Bustles had two periods of fashion favour. The first, in the early 1870s, created a substantial, rounded derriere, sometimes referred to as a Grecian bend. But by 1875 bustles were so last year and given the considerable discomfort of wearing them you'd have thought they'd have remained that way. Then along came Lily Langtry. 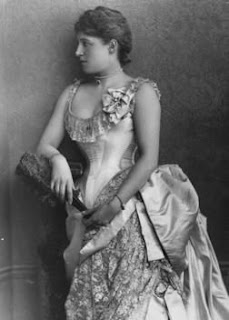 Lily, you will recall, was a sweetheart of the Prince of Wales and also an actress, always with an eye on her appearance and her bank balance. She was paid to endorse Pears soap.

The revived bustle, angular, jutting almost horizontally, which Miss Langtry helped to make fashionable, emphasised the slenderness of an already tightly-corseted waist. Here she is, the saucy minx.

One of the problems with early bustles had been sitting down. You couldn't. The best you could hope for was to perch gingerly or lean. Add to that the fact that you could barely breathe in your stays and were steaming like a turkish bath under all those petticoats, being a Victorian fashion plate can't have been much fun. But Lily had an idea how to make the bustle a little more user friendly. And here it is: the Langtry collapsible bustle cage. 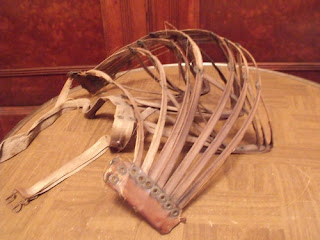 I've never had occasion to wear a bustle but I have been known to dress up as a historical protagonist in order to present a book so who knows, it may yet happen. I imagine anyway that some of you are eager to learn the art of sitting in a collapsible bustle so let me point you in the direction of this video. Any day now you may get invited to a steampunk costume party.  No harm in being prepared.
Posted by Laurie at 01:30

Learning something new every time - thank you!

I remember getting a book from the library about Lily Langtry when I was a teenager. It was called 'The Jersey Lily'. Funny that - I don't remember the titles of many of the books I've read recently!

That collapsible bustle would make a good steampunk cover, all by itself.

Gosh! How entrancing. I read that book about LIly Langtree too, Sue!