The first punk gig I went to was X Ray Spex at Hornsey School of Art. The college had closed down for good and the building was empty. I have tried to check the year but can't find it, 77 I think, I'd started buying punk records by then,  but seeing Poly really kicked it off for me. There was a girl, not much older than me and brown like me and she was brilliant. I mean, the woman wore a crochet blanket on her head on Top of the Pops!
This is my favourite X Ray Spex song. The Day The World Turned Day Glo....


I've been in the 1970s a lot lately. More work on a script, I know you've heard it all before, but what also triggered this post was reading Viv Albertine's enjoyable and superbly readable autobiography, Clothes Clothes Clothes Music Music Music Boys Boys Boys. Viv Albertine was a member of the The Slits, an uncompromising female band, and a lot of the early part of the book is about that time in London.  I came to punk too young to take part but old enough for it to change my world.  And this lovely woman above Poly Styrene was instrumental in changing everything for me. 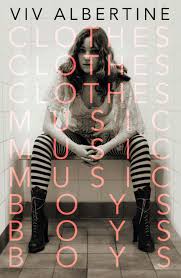 There was before punk, a world of flared everything and bands with songs that went on forever, and then there was punk and excitement and being part of something and trawling across London to second hand clothes shops, looking for the exact item you needed to make your outfit.

Albertine paints a familiar picture of pre mobile phone, pre internet, life, friendship, and sex. One thing that really resonated with me was the way she talked about clothes. Perfecting your look those days took a huge amount of effort, you needed to be able to run away from Teds or Skins, (I carried knitting needles they served me well) just your look was enough to send straights (this had nothing to do with sexuality) into a rage. Most of the time though we weren't about engendering rage, we needed to signal to our people that we knew. That we were like minds.

Albertine's book took me back to my mid teens, it's an interesting read and full of wonderful detail, of clothes of attitudes, of always being right.

There's a wonderful postscript in which she lists her favourite clothes of any particular time. Some of mine from the mid seventies were these.
Blue suede Chelsea boots
A black PVC Mackintosh
A cream silk beaded flapper dress (I wore it torn - it was original and every time I wore it it tore. This makes me cringe thinking about it now)
A skirt made out of a pillow case (!)

I must admit I wasn't a big Slits fan, I preferred The Ramones and Poly and The Buzzcocks. But Viv Albertine's book's a great read. If you don't think so well, as  Poly (who died far too young of cancer in 2011) would say, Oh Bondage! Up Yours!


Catherine's latest book is The Curious Tale of The Lady Caraboo. Buy it now or it's the knitting needles....

PS. I re read this when I posted it and realised I did 'do' something. I took pictures and blagged free gigs by pretending to be a 'proper' photographer (there was a risible fanzine I think) and even though I am the worst photographer in the world, I thought I might want to make films that sent me to art school eventually and from there 10 years later, to writing.

Posted by Catherine Johnson at 06:27

Mid-70s I was still in Canada and still in my hippy gear - those long skirts and flowing tops may not have had the impact of your clothes, but oh, they were so COMFY! I think I was carrying knitting needles too, but actually knitting at somebody is not really a great line of defence.

Mid 70's for me was eclectic but rock orientated. I liked some of the punk. Loved the Buzzcok's, or stuff like The Motors Dancing The Night Away. I came into my own with Nirvana and beyond. Anything hard and guitar driven! I must admit I never got the appeal of X-Ray Specs though! :-)