"And what is the use of a book, thought Alice, without pictures or conversation?"

This has long been one of my favourite quotations from a favourite book, Alice's Adventures in Wonderland, by Lewis Carroll.  I agree with it completely. I can't promise you conversations in this post but I do have a lot of pictures to share.

This year is a double anniversary. It's 150 years since Carroll's book was published and it's 50 years since I appeared (or rather took part...I didn't appear.  I was hidden. More of that later!) in a production of a play directed by Adrian Benjamin to celebrate the centenary of the publication, in 1965. This passage of time makes me feel almost as old as Alice herself.

Nigel Rees, who now hosts shows on BBC Radio such as Quote Unquote, was the organising force behind the 50th anniversary tea party in the Dean's Garden at Christ Church College. He played the Narrator (Lewis Carroll)  in the play, and has kept an extensive archive of photographs, some of which I reproduce below. 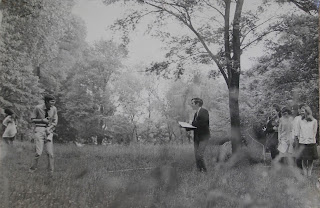 The pictures above and below show some of the rehearsals in Christ Church Meadow, where the production took place. These must have been rehearsals quite late on in the process because we also used the Dean's Garden and I do remember thinking: Alice, the real Alice Liddell, the Dean's daughter, would have played here, where we're lying about and declaiming.

The seven Alices in the photo below were part of the rather 60s ish aspect of the show. I can no longer remember (it was half a century ago!) what the purpose of those seven young women was, but it looked wonderful when they were all together on the rungs of a ladder, as I recall. 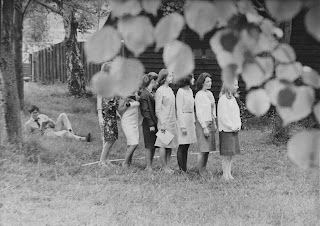 The real Alice, the embodiment of Carroll's quiet and determined young heroine, was Tamara Ustinov. She was quite spectacularly good and looked just like the Tenniel illustrations when dressed in her costume. 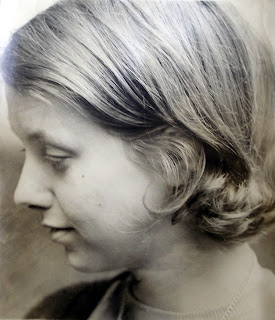 There are no photos of me in action from that production.  I am in the programme under a pseudonym: Rosamund Ackworth.  This was because I didn't have acting permission. I had done 'too much acting' according to my tutors and failed my Preliminary exams (the only scholar of the college ever to have done such a thing in living memory) and so the powers that be decided that I couldn't be in Alice....defying those powers and taking part anyway was the one naughty thing I did while at St Hilda's. And the director made sure I wasn't caught. As well as appearing under a pseudonym, I was placed on a kind of platform up a tree with only my skirt and shoes showing. My role was as Alice's sister,  and all I had to do was sing. When a song like "You are old, Father William" was sung on ground level, there I would be, singing the original hymn or Victorian parlour song of which it was a parody. It was a perfect arrangement. Once the production went on to the Minack Theatre in Cornwall after the term had ended, I could be visible and sang my songs from the top of a rock. 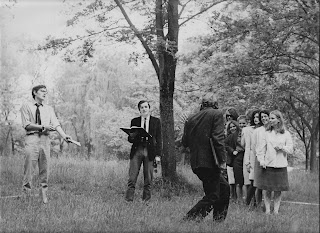 That was in 1965. The tea party was early in July. And you can see, from the picture below, that Tamara Ustinov is still looking very Alice-like. Age cannot wither her, etc. To her left is the Dean of Christ Church who very kindly let us use his garden for our revels. The person with their back to the camera is Nigel Rees. 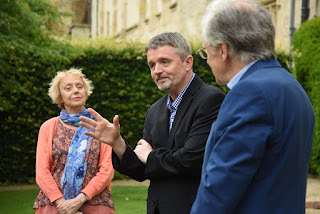 Oxford was full of Alice memorabilia. Here's a window that's typical of many I saw. 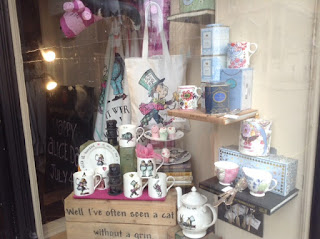 This is the Dean's garden. Just as I remember it, but bigger.  This was where we rehearsed quite often. 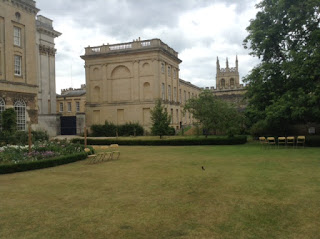 The food was most appropriate for the occasion, as you can see. 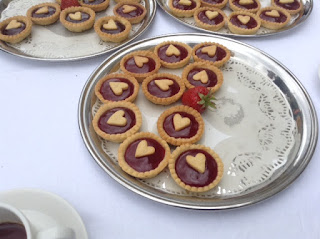 I haven't put up photos of the cast today.  They looked, spookily, much older and still exactly the same as they were at 20. But here below is Alice's nursery. The Dean allowed us to go up there and photograph it, too. It's the sitting room for him and his young family, but this was where Alice Liddell spent a great deal of time and it was wonderful to be there and see what it was like, imagine what the room must have been like in her day. 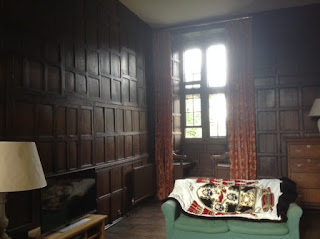 I went to the window and looked out. This must have been something that Alice, from what we know of her, did over and over again. I took a picture and this is it. The plants may have been different, but it was strange looking out just in the same way as she did. I have no doubt that this place is haunted in the best possible way: full of echoes of the book. And the  book is one that will live forever, in  spite of some modern misgivings about its author. 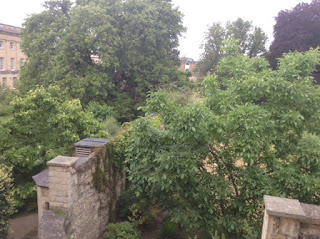 Some of us went to evensong in the Cathedral before leaving. It was a perfect end to a wonderful occasion and many thanks are due to the Dean for letting us celebrate our anniversary in such grand style.
Posted by adele at 07:00

What a magnificent memory, Adèle, thank you so much.

You sound like the Cheshire Cat, except that you disappeared downwards. What fun you all must have had. Thanks very much for telling us all about it.

This is a delight of post, Adele! Thank you, though I am slightly astounded at the thought of you failing exams. That "Father William double singing - and the tree balancing - does sound rather brilliant.

Thanks Penny ! I failed the Prelims because I was performing on the West End stage at the Comedy Theatre SIMULTANEOUSLY! I had a car waiting after the curtain call to take me back to Oxford where I climbed into college. Next day, did exams, came out at 4.00 or so where a car was ready to take me to London in time for the performance. YOUTH!