THE FACE OF AN ICON by Penny Dolan 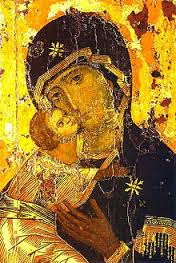 Some faces haunt you for life. Near my desk, among a variety of women’s pictures and portraits, hangs a small icon of the Virgin. She was a prize won at my convent school, where the nuns ran a class raffle each month.

The prize was always a holy picture, framed using a cheap technique known as “passe-partout”. Originally, this term referred to a bevelled cut-out cardboard “mat”, which saved an etching or drawing from damage by contact with the glass. A gummed paper tape held the picture in place on the underlay. Later on, passe-partout was sometimes used to describe the tape and the framing technique itself.

It was simple and cheap and, back before the age of clip-frames and large posters sticky-tacked to walls, passe-partout was a popular craft, used for pictures cut from magazines or for valued sketches and paintings. The tape had now become a narrow band of gummed paper or cloth tape, neatly mitred at the corners, and glued around the edges of the “glass sandwich” to hold the sections together.

My Virgin is clearly a cheap copy of an icon. I’d kept her because of her beautiful expression - neither coy nor plaintive - even though that frame is scuffed and torn and a dangerous glass splinter marks the damage when the icon once fell on its corner. She’s an image that has always been there in my life, a reminder of a time when the people spent their leisure hours on such small crafts and teenage girls were pleased to win such objects as prizes for a charity raffle. I liked her being there. That was all.

However, as I sat idly watching Joanna’s Lumley’s “Trans-Siberian Train Trip” series on tv, my very same Virgin appeared on the screen. After the surprise, and the nostalgia, I started trying to find out more about her. Known as The Virgin of Vladimir, she is a famous Russian icon and in the programme, she seemed linked to a pretty Romanesque church at Vladimir. However, the Virgin – or Theotokos - is quite a well-travelled lady. 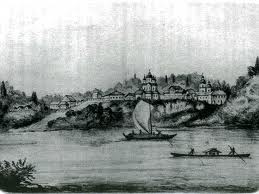 One devotional story claimed that the icon was painted from life by St Luke himself, in Jerusalem, and that the wooden panel came from the supper table used by the Virgin, Jesus and St Joseph.

Historical studies, however, suggested that the icon was painted in the early 12th century and later sent by the Greek Patriarch of Constantinople to the Grand Duke Dolgoruky of Kiev, who placed the Virgin within the Mezhyhirskyi monastery 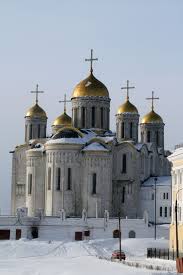 Unfortunately, when Prince Andrew, the Duke's son, stole her and tried transporting her past the city of Vladimir to Rostov, the horses refused to move. That night he had a dream where the Virgin ordered him to build a church in her honour. The city seemed to be under her protection, although she got little honour when the Mongol hordes attacked in 1238.

However, her reputation went before her. When Tamerlaine invaded in 1395, the Virgin was taken from Vladimir to the new capital Moscow in a great procession. After the huge welcome, King Vasili I spent the night weeping in front of the image. By morning, so the legend says, Tamerlaine’s hordes had withdrawn: the city - and Russia - was saved.

Naturally, the Muscovites were unwilling to return the icon; instead she was placed in the Cathedral of the Dormition in the Kremlin, and she is reputed for saving Moscow from Tatar hordes in 1451 and 1480 and on other occasions. 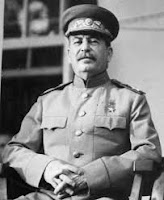 Reading this, I recalled the tv programme and realised that "my" Virgin attracted legends. Even the worldly oligarch, showing Miss Lumley around his family church at Vladimir, recounted a more modern miracle. Back in 1941, he said, during the Great Patriotic War, Stalin was afraid the city would fall to Nazi forces. Although religion had been strongly discouraged, Stalin was desperate enough to turn to the faith of his childhood. He gave orders that the Virgin of Vladimir was to be placed in an aircraft and flown three times round the city. Needless to say, the Nazi troops suddenly retreated, and the people of Moscow were saved, he said.

Restored again and again, only the Virgin's face and hands seem to be original and she has been repainted after fire damage. Part of the surface has been concealed under a metal cover, probably of gold or silver and heavily layered with jewels but there was no suggestion as to when or where this valuable treasure was removed and disappeared. .

Recently, the Orthodox Church has had a more visible role within the Russian state structure and the Virgin of Vladimir has become an acceptable national symbol. Even so there must be complications to this whole history that I do not understand, especially as Vladimir itself is part of the Ukraine..

Nevertheless, back before I saw the programme, and started investigating the Virgin of Vladimir’s history, I knew her not as a national or even a political figure but only as an inspiring image. I have kept my cheaply-framed icon, tattered and cracked, all these years because the Virgin’s eyes have a kind and sympathetic intelligence, a gaze that is good to have by you while you work. I was also pleased to learn the icon is known as the Virgin of Tenderness.

Others have been drawn by the Virgin of Vladimir's powerful gaze. You may well have seen her eyes on screen too: in the logo of a film production company. 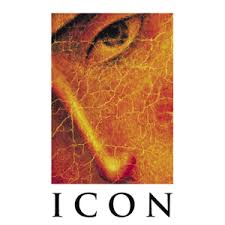 How beautifully serendipitous to have found out the origin of your icon in this way!

Fascinating, Penny, on many levels.
To me, the Virgin's expression seems heavily resigned - as well She might be, after all she's witnessed.

Thanks! It's certainly not a face of joy, I'd agree there.

Thank you for this - she is a good companion for writing about being human I think.