All Aboard! by Laurie Graham


Today’s post will be the first in a series linked to my new novel, The Night in Question, which will be published in October. The book deals tangentially with the Whitechapel Murders of 1888 and researching it was an interesting mix of surprise and familiarity. My great-grandmother, whom I knew briefly, would have been 12 years old at the time of the murders. I wonder whether they talked about Jack the Ripper in rural Wiltshire?

Not being a Londoner one of my research surprises was the discovery that  in 1888 Whitechapel already had two Underground stations  -  Aldgate East and St Mary’s,  with another (Whitechapel station) under construction. In fact Underground travel was already old hat by then  and much improved from this 1860s prototype. 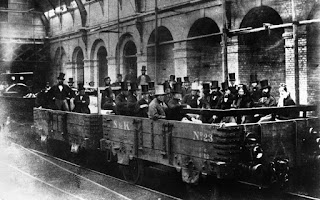 St Mary’s station no longer exists. It was closed to passengers in the 1930s and only reopened briefly at the start of WW2, to be used as an air raid shelter. The station building took a direct hit in 1940 and was demolished but the platform apparently still exists, walled off from view as the Upminster trains rattle through. A ghostly relic of Victorian London.

So in 1888 how did most people get around? In an impoverished area like Whitechapel shanks’ pony was the norm. People walked miles every day even if they’d had to pawn their boots and go barefoot. Being a pedestrian was anyway hardly a pleasure. Pavements were narrow, streets were crowded with wheeled vehicles and the Highway Code was still a distant prospect. The great stone/asphalt argument swung back and forth too. Carriage wheels on granite created a lot of noise. Asphalt was much quieter but was dangerous for horses. All it took was a light coating of rain and asphalt became a skating rink beneath horseshoes. And then there was the smell. In the 1880s London had around a thousand tons a year of horse dung to deal with. 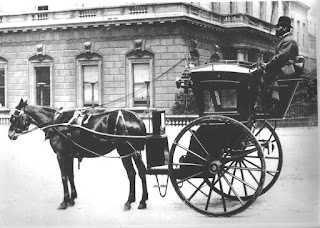 The hansom cab so beloved of period movie makers would have been an affordable option for my protagonist, Dot Allbones, but hardly a luxurious one. It was a jolting kidney-shaker, carrying two passengers, three at a squeeze. With just two wheels it didn’t hold the road well and you were at the mercy of a driver who sat in a high, rear seat and who might well have had a drink or two.  The four-wheeled growler, or clarence as it was sometimes called, was more commodious and more stable. It had room for four passengers and luggage too. You would have easily found a growler for hire outside Liverpool Street station for instance.

The other options were horse buses and horse trams. In the early 19th century the buses had reigned supreme although the top deck, reached by ladder, was used by only the most determined of females. By the 1880s, buses had improved greatly, with proper stairs to the upper deck and seats that faced forward instead of rudimentary bench seating. Nevertheless buses were losing trade to the trams. It was matter of Newtonian physics. A tram glides on its track more easily than a horse bus trundles on its wheels. Less effort was required of the horses which in turn meant that a tram could carry more passengers and fares became more competitive. 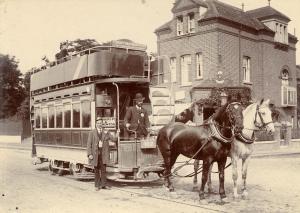 At just a penny a mile market forces were at work. The horse tram became the commuter's  preferred mode of transport and a practical choice for Dot Allbones on the morning she needed to travel from Hackney to the Golden Lane mortuary on a sad and sobering errand.
Posted by Laurie at 01:30

Just come late to this, Laurie...very interesting and can't wait to read the book!