Manda Scott's INTO THE FIRE reviewed by Elizabeth Fremantle 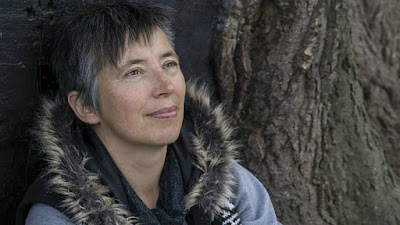 Manda Scott wrote a number of critically acclaimed crime novels before turning to historical fiction but with her latest release, INTO THE FIRE, she appears to have created a work that perfectly amalgamates both genres, with an impressive story that interweaves gritty contemporary crime and revelatory medieval history.

A Scott trope, across both genres, is ballsy women and who could be more ballsy than the figure who lies at the heart of INTO THE FIRE, Joan of Arc? Joan is depicted here as, rather than the somewhat whimsical saintly figure we learned about in school, a proper warrior woman. Scott hasn't plucked this idea from the ether – her Joan is based on groundbreaking historical research, a version of which becomes the focus of the modern day thriller that is threaded through the historical narrative.

The novel opens with modern day Orleans ablaze. A group called Jaish al Islam are setting buildings alight. But when a the charred remains of a scientist, who has hastily swallowed a memory chip, is found in the burnt out shell of a hotel, police detective Ines Picaut (another seriously ballsy woman) believes there is more to the conflagrations than meets the eye.

The narrative slips effortlessly back and forth between the fifteenth and twenty-first centuries, with each thread feeding into the other and both equally compelling. The potent symbol of the Maid, on the battlefields of medieval France and in the hearts and minds of the modern day French, is the link that ties the separate periods and stories together and the city of Orleans, both medieval and modern, provides the backdrop for the action. 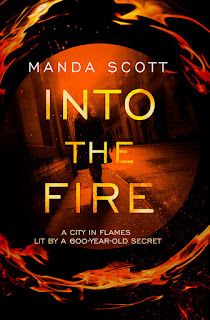 In medieval France the English, more accurately a hotch-potch of mercenaries and Bergundians, are struggling to hang onto the territory won by Henry V. But with the old king dead and a child on the throne the French are gaining back Northern Franc battle by battle with alarming rapidity. It is The Maid who girds the men on with her singular courage, inspiring and leading the French army from the front and it is the supernatural belief invested in her by her own and the opposing army that makes her so powerful.

Modern day Orleans is in the throes of a different kind of power struggle. With mayoral elections imminent, the far right are gaining ground and capitalising on the fear that Jaish al Islam is spreading with its deadly fires and they are using the iconic figure of The Maid to promote their cause. Their flame haired female candidate is on billboards all around town. Picaut finds herself at the heart of this political conflict as the husband from whom she has recently separated, Luc Bressard, is running against the far-right for mayor and the Bressard family, a tight knit mafia style network, mean business.


Just as the Bressards have to use all their whiles to overcome their political opponents, so the medieval English must resort to drastic measures prevent their army from being entirely overwhelmed by the French. So seasoned fighter Tod Rustbeard is sent to infiltrate the French and assassinate The Maid. But nothing is as straightforward as it seems for Rustbeard or Picaut and so begins a gripping, twisting and turning, quest to uncover the truth, not only about Joan of Arc but also about Jaish al Islam.

Scott remains in complete control of her complex material throughout and this makes for a thoroughly absorbing and page-turning read as we follow the narrative through to its final series of revelations. But beyond that her impeccable research makes both periods spring vividly to life. The depiction of medieval France at war, with its brilliantly choreographed scenes of combat, feels as gritty and vibrant as the present day politics of Orleans. It is the attention to detail that achieves this with two entire and believable worlds separated by seven-hundred years emerging from the page, but also in the little quirks and tics of her characters – Scott invests them all with passion and originality and for that reason we care deeply about their fate.

INTO THE FIRE is a thrilling read that is both a fascinating exploration of an iconic historical woman and a masterclass in suspense. It is the kind of novel you will be compelled stay up all night to finish.

Elizabeth Fremantle's novel WATCH THE LADY, set in Elizabethan England, is published by Penguin.
Posted by Liz Fremantle at 06:00

Email ThisBlogThis!Share to TwitterShare to FacebookShare to Pinterest
Labels: Elizabeth Fremantle, Into the Fire, Joan of Arc, Manda Scott

I read an ARC of this and absolutely loved the unfolding story and the style of the prose. It had a powerful, visceral quality but somehow was ethereal at the same time.