A couple of weeks ago, I was lucky enough to accompany my friend, the artist Julia Griffiths Jones, and photographer Toril Brancher on a trip to Slovakia. This was a working trip. Julia was moving her installation, Room within a Room,  from a house in The Museum of the Slovak Village, located in Jahodnícke háje  to the Orava Village Museum, Zaberec.

Julia and I have been friends for a long time and although she works in a different medium we share many things in common. I find it easy to talk to her about my work. She understands the strange and sudden enthusiasms, the need to feed obsessions, the anguish when work doesn't go well, the elation when it does. She has always been a huge support as I hope I have been to her. She puts me back in touch with the well spring of creativity which should be the most important thing, the only important thing, the thing that makes the day to day donkey work bearable. She has also been a very useful source of information. Her background in textiles made her invaluable when I was researching quilts for Witch Child and I was touched and very honoured when she based a piece of work on my books Sorceress and Pirates! for her Stories in the Making Exhibition. 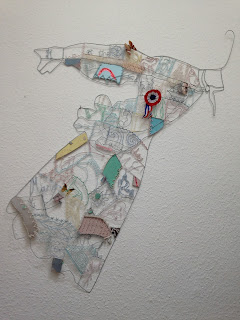 Julia says of her own work:

My work is concerned with the translation of Textile techniques such as stitching, quilting, patchwork, embroidery, into a wire and metal form; thus changing its original nature and function but retaining the meaning and the decoration. I am very inspired and influenced by Textile work created by women alongside their domestic duties as much as for need as for warmth. This interest began when I was a student at the Royal College of Art.
I won a scholarship to research and study Textiles in Poland and Czechoslovakia. Here I saw Folk Art for the first time; it was everywhere woven through all aspects of life. Gradually I began to transfer my drawings into three dimensions using wire and became totally enthralled by the possibilities of drawing in space using line and colour. My training and qualifications are in Textile Design so this change in materials was a huge departure for me but a very crucial one as through it I began to create, I believe, a unique language and a deeply satisfying one.
In 2007 I began drawing from the collection of The National Wool Museum, and this experience inspired me to digitally print my drawings onto wool and cotton.The Museum then commissioned me to make five pieces of work which were installed throughout the mill as a contemporary trail in 2009.


My current project is to research and explore new techniques and materials, thus developing my experimental work in wire to be able to create a room within a room, a museum, an installation of suspended objects, in metal, which preserves by its durable nature the visual motifs found in textiles from Wales and Eastern Europe and which will be the result of over thirty years of drawing and research.
It is best to let the work speak for itself. It is  difficult to see the whole room in a photograph but Toril has done a fantastic job in managing to capture something that works very much in 3 dimensions:  delicate, floating, occupying the space with the viewer.


Julia bases her work on traditional costume, folk motifs, embroidery and decoration which she translates first to drawing, then into wire. I love to see the actual objects and Julia's interpretation. While I was at the museum, I went to some of the houses and rooms that Julia had visited in her earlier times in Slovakia and where she had drawn these slippers tucked under a bed, embroidered pillow cases, table cloths, shirts, trousers, skirts and blouses; these images that had so fascinated her, now translated into the medium of wire.

Metal working is a male preserve. One of the important things about Julia's work is she combines male and female domestic art together in one form.

Wire working has a distinctive place in Slovak history and culture. From as early as the sixteenth century, the Drotari (wire workers or tinkers) were travelling from farm to farm,  village to village, selling their goods and metal working skills, moving out of their native Bohemia, travelling west to Germany, east to Russia, spreading all over northern and central Europe. Eventually, their restless wandering would take them to America, where their extraordinary skills gained new markets. Noted for their inventiveness and ingenuity, they even created the shopping trolley.

I had been to Slovakia with Julia before in 1999 when she showed me the Wire Museum in Zilina. Readers of this blog will know how much I love museums, the stranger the better. I especially like museums that are about just one thing. The Wire Museum is devoted entirely to objects made from wire twisted and formed into all kinds of things both decorative and practical: bowls and birdcages, baskets and jewel boxes, life-size human figures, fairy tale creatures, animals and birds. 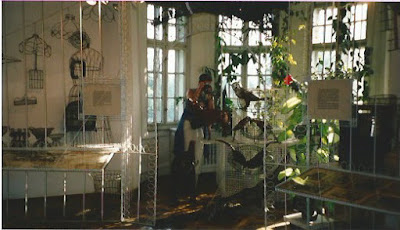 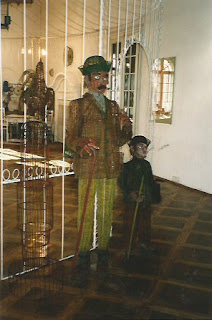 On this previous visit in 1999, I had been writing Witch Child. Every historical novelist has to answer  important questions, like Where do my characters live? What are their houses like? I was moving my main character, Mary, from 17th Century England to America where the colonists would have to build their houses from scratch. I was in a heavily forested area, one subject to extremes of climate, hot in summer but very cold in winter. Very similar. I found myself studying the wooden houses in the outdoor museums and thinking that the houses my characters built would need to be like these: sturdily constructed from forest trees, the gaps in between the shaped logs stuffed with moss to keep out the winter cold. 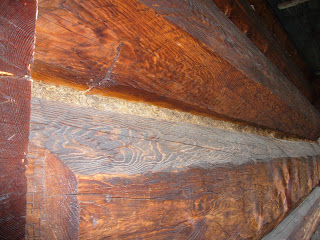 So I invented a new character, Jonah Morse, based on a real apothecary who had travelled from London to Russia, to the court of the Czar. He could have travelled through these regions, I reasoned, and being an observant kind of fellow, noted how the houses were built and advised his fellow settlers in America to do likewise. 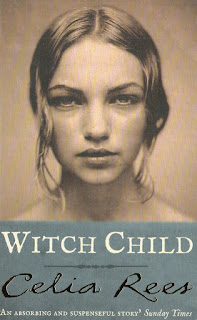 So, in Witch Child, that is what the houses are like, this is how they are built. It might seem a small  thing but it's that kind of detail that lends a story veracity. Inspiration is everywhere, all around us; it is there for the finding in the places we visit and the things we see. I would never have visited Slovakia if Julia hadn't asked me to go with her and the houses in Witch Child would have been made differently and not so well. I love the way a passing thought, a sudden observation, spins a tale of its own.

'I love the way a passing thought, a sudden observation, tells a tale of its own...' You put this so well - it's something that happened to me a lot when I was writing Warrior King, about Alfred the Great. I remember the chill on the back of the neck as I gazed at the white horse of Uffington, where Alfred took the lead in a significant battle while his brother was still king.

And Julia's installation looks amazing, on lots of different levels - not just because of her skill and creativity, but also because of the way she soaked up a culture that wasn't her own and made art from it. Marvellous.

this is fascinating, Celia.As you know I share you love and Julia's love of textiles, handwork etc. Superb. And very interesting about the wooden house!

I'm glad this struck a chord with some of you. Julia's work will be on show in the UK next year sometime, I'll keep the HGs posted.