Charity shops - second-hand bookstores - you never know what you might stumble across in them.  Books you didn't even know existed but that still somehow manage to draw your eye from in amongst all the other titles on display.  I'd like to tell you about just one of the books that did that to me, and now lives on my own book shelves: 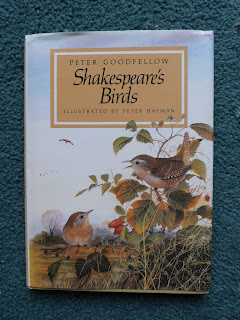 This is not an earth-shattering book.  It is not a weighty, academic study.  It is gentle and unassuming, with the flavour of a pleasant conversation about it. 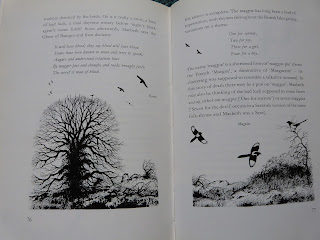 The illustrations are detailed and thoughtful. 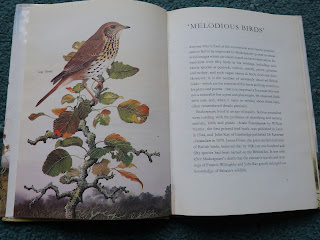 I learned some stuff I didn't know - like, for example, some of the old country names for birds, such as ouzel for blackbird, throstle for song thrush and puttock for the red kite.  Some of the conventions and stories Shakespeare would have drawn on in his use of bird imagery I knew, such as the swan who only sings as she dies, or the barnacle goose being born from barnacles and therefore being okay to eat during Lent (because it was technically a fish ...)  But others were new to me - the kingfisher, for example (known as the halcyon as in halcyon days) was thought to build its nest out of fish-bones, floating on a calm sea.  And a dead owl, nailed over a door, kept evil away.

But it isn't at heart an I'm-going-to-teach-you-stuff book.  What it boils down to is, Goodfellow really likes birds, and he really likes Shakespeare, and he hopes you do too.  And the one thing Shakespeare's Birds achieved above everything else was to remind me of just how utterly mellifluous the plays and sonnets are.  It made me want to go back and re-read them.

So thank you to the second-hand bookshop I found this book in, and here's to many more pleasant surprises in the future.  What would I quite like to find next?  Well, J.E. Harting's The Ornithology of Shakespeare critically examined, explained and illustrated, published in 1871, and listed in Goodfellow's "Suggestions for Further Reading" would be nice.*

And how about you?  Tell us about your favourite finds, in the random and serendipitous world of charity and second-hand bookshops - the books you maybe didn't even know existed, that now have a new home on your book shelves.


(*After typing those words I had a bash at googling Harting's book and lo and behold, I can read it on the Guggenheim online archive here - so that's my distraction for the day organised, without even leaving the house!)
Posted by Joan Lennon at 00:30

What a lovely find, Joan.

Indeed what a lovely find Joan and you're so right, browsing charity shops turns up all sorts of interesting finds. One of my favourites is a bird book too - The Reader's Digest AA book of British Birds. It's a big beast with a gorgeous illustration of a bird on each page with all the details about it, and at the back of the book there are chapters on migration, biology etc. There was another I picked up on craft projects written in 1920's that even included the medieval crafts of tablet weaving and naalbinding!

Oh how lovely! I'm envious - must track a copy down!

Sounds like quite a find! I love diving into dusty old second hand bookshops. There is always something. I used to find very old books - a 1922 Works Of Shakespeare(a Christmas gift), an 1879 Aeneid(a school prize) and an 1880 works of Byron. But more recently, I've only found paperbacks and some hardcovers published in the last twenty years or so. Which doesn't mean I've had no luck. The paperbacks are often out of print books I loved years ago and I've pounced with a cry of delight on books of Celtic myth and legend and Fairytales of countries I have never studied.

Another good source of treasure is the remainders bookshop where I find, for a good price, lots of useful reference works on anything from herbs to a history of medicine or the Roman Games. I can use those as well as enjoy them.