My children (ages 7 and 4) immediately drifted over. While I was still reeling from the screeching voice – amplified by loudspeaker - and contemplating Mr. Punch's enormous nose, they settled in for the performance. (Children are such experts in the willing suspension of disbelief.) And while I was startled by the show's violence, the children screamed with laughter and were firmly on Mr. Punch's side. (I only fully relaxed when Jack Ketch, the hangman, appeared. I was on safer ground there, knowing Jack Ketch's reputation for "barbarous inefficiency".)

As my family watched the performance, a woman threaded her way through the crowds, shaking a bottle to collect donations - the main source of income for the show, although there were also souvenirs for sale. The woman turned out to be Jacqueline Codman, whose grandfather founded the Punch & Judy tradition in Llandudno.

There's a delightful story behind Professor Codman's proscenium and set of puppets: 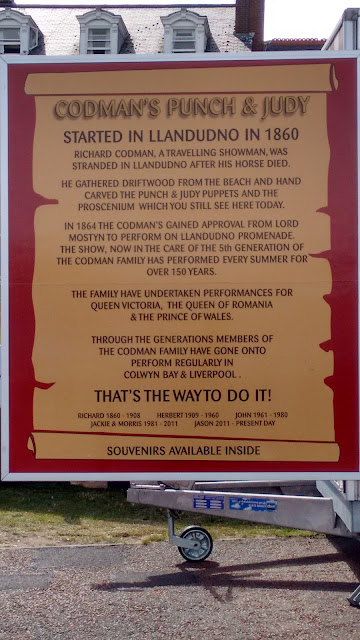 In case you can't read the words in the photo, they say:

Codman's Punch & Judy started in Llandudno in 1860. Richard Codman, a travelling showman, was stranded in Llandudno after his horse died. He gathered driftwood from the beach and hand-carved the Punch & Judy puppets and the proscenium which you still see here today.

I love this kind of family legend, and reading it got me thinking specifically about the Victorian tradition of Punch & Judy. (Ann Swinfen has already blogged here about Punch's origin in commedia dell'arte, and I won’t re-tread that ground.) What I wanted to know was what happened to the character after Samuel Pepys saw "Polichinella" perform in the 1660s. What changed after he was anglicized as Mr. Punch? When did Judy join the show, and how did they migrate from theatres to the seaside?

Although the original Punch was a marionette (as opposed to a hand puppet), most of Punch’s other traits have remained consistent since the seventeenth century: the beaky nose and hunched back, his big stick (or batone, in Italian) – and, of course, that defining squawk. In the 1720s, Jonathan Swift mentions Punch’s “rusty voice” in a poem. Punch novices, like me, will be delighted to learn that the sound is produced by a “swazzle” held at the back of the puppet-master’s mouth. It’s used only for Punch’s voice, of course, which makes the performance of fast-talking multiple characters a miracle of timing and dexterity on the part of the puppeteer, or “Professor”.

In the eighteenth century, Punch acquired an overbearing wife named Dame Joan, who was renamed Judy some time before 1825. Their domestic strife was a central feature of the show – perhaps to give Punch yet another reason to exercise his batone? With Punch now transformed from exotic clown to embattled family man, it makes sense that towards the end of the eighteenth century, there was a dual shift: from marionette to hand puppet, and from formal theatrical settings to street-side performances. These changes are clearly linked. Marionettes are expensive and fragile; hand puppets less so. Marionettes tend to require at least one marionettist (puppeteer) per figure. Once you have sturdy puppets and only one performer, you can also transport a small stage, or booth, and take the show to the audience – or, at least, where you think the audience might be.

By 1828, there was enough interest in Punch & Judy to publish a script of the accepted play (although its accuracy has been challenged), with engraved illustrations by Cruikshank -- yes, the same George Cruikshank who illustrated many of Dickens’s novels. And setting Punch firmly in his new socio-economic context, Henry Mayhew interviewed a Punch & Judy man for his monumental series, London Labour and the London Poor.

Punch’s violently disruptive, anti-authoritarian stance also made him the perfect mascot for a publication that aimed to satirize English society. In 1841, Mayhew cofounded Punch magazine,  borrowing Punch’s energy, popularity, and street cred for his new publication.
With the expansion of the railways came the creation of seaside holiday resorts like Llandudno, Brighton, and Blackpool – and amongst the sea-bathing machines and donkey rides, there too was Mr. Punch. This brings us back to the Codman family history. Trapped in Llandudno with bills to pay, who better to come to a travelling showman’s rescue than the ever-popular Mr. Punch?

I've always thought it was 'That's the way to do it!' rather than 'you'!

You're right! I mistyped. Thanks for the catch!

My goodness this took me back. My father, an all-round entertainer for much of my childhood, was also a Punch & Judy Man (that was the title he and others went by). I was for several years his assistant. Before we left home, it was my job to check the puppets were all there in the case, make sure there were several swazzles. The entire show was transported in a battered old blue suitcase. Daddy was usually paid five pounds and five shillings and I was given the five shillings. After a day - usually Saturday - of three shows, Daddy's voice would be hoarse in spite of the swazzle. I can still him hear him today saying "that's the way to do it, that's the way to do it". What a memory. Thank you for this.

Lovely piece. My husband is a Punch and Judy man and travels all over the world doing shows!

Oh, Tanya, how exciting. There is currently a daily Punch and Judy show in one of the nearby villages here. He usually arrives in summer for the tourists. Here, the shows are called Guignol. Does your husband always work in English?