Engineering and wineberries, by Leslie Wilson 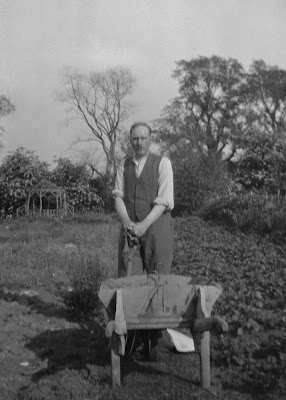 This is my grandfather, James Baker, or Jim as he was known to his wife and his friends. He was a marine engineer who began his working life in dockyards (as a young apprentice at the close of the nineteenth century he worked on the Royal Yacht, the Victoria and Albert, but more of that in a future blog). Later on, he taught at the Merchant Venturers' College in Bristol, which developed into the renowned Bristol University Faculty of Engineering.
He was a Methodist Circuit Steward and lay preacher, and also taught in adult education, yet amazingly still had time for gardening, as this photograph shows. He had a large garden (but now, sadly, houses have been built in most of it) at the back of his house in Sea Mills lane, Stoke Bishop, where the Trym flows past the ancient Roman harbour and into the muddy Avon up which in those days the great ships sailed all day long on their way to the docks in the middle of the city. The ships were a constant excitement to his children, and I'm sure he chose to live there because he also loved to see them.
Grandad grew over a hundred different fruit trees in his garden, which must have kept my grandmother busy jamming and bottling for the winter, and also, as my father recorded in a little memoir he left behind him, Grandad grew wineberries, which, my father said, he had never tasted before or since, and had an incomparable flavour.
I re-read this memoir about four years ago, and was fascinated, because a few years earlier I had planted wineberries in my own garden.
It's a beautiful plant, with bright red bristly stems in the winter (if you plant them where they catch the sunset glow they are spectacular then), pretty leaves and deep pink buds (when the flowers have been pollinated, they shut up again, and the berries develop inside a sticky calyx, to open later and show the new pale red berries). The ripe berries are ruby-coloured, also sticky, and, as my father wrote, have an amazing, unique refreshing  flavour.You can just see the berry, still green, peeking out of its protective calyx, on the photograph above.
The strange thing is, garden writers say that the Japanese wineberry or rubus phoenacolasius (what a wonderful name!) was only introduced to the UK in the 1970s. So where did my grandad's plants come from?

I wonder if some seaman friend of Jim Baker's had come across these berries - maybe in America, where they have become invasive in the wild. Or even in the Far East, and maybe he brought Grandad a root? They are really very easy to establish, and throw up suckers, so I am often looking out for homes for new plants. So maybe my grandfather was growing them in Bristol at a time when nobody else in the country was. Anyway, at this time of the year, when I'm picking them on a daily basis, and when my grandchildren descend and eagerly help themselves to the small delicious berries, I think about Grandad, and about my father, eating them in his childhood, and I do wish I could tell him about growing them now. I often also wish I could meet my grandfather, whose love of gardening I have inherited.
Does anyone else have a record of these plants in the UK before the 1970s? I'm sure the RHS would be interested to hear about it.
Posted by Leslie Wilson at 00:30

I remember being on holiday in Cornwall approx 1969 and the owners of the cottage inviting us to pick some of the Japanese wineberries that covered their garden wall. My keen gardening parents were very interested as they had never heard of them before that time.

Oh! That's interesting. I haven't seen them wall-trained, but they would probably do very well like that. That is before the '70s, anyway.. I do think the introduction of plants is a fascinating thing. Every time my winter flowering honeysuckle is in bloom, I think of how Robert Fortune brought its ancestor back in the 1840s, in a sailing ship..and there are so many other plants. The whole history of plant collection is a function of exploration, colonialism, and the expansion of trade - and in some cases - where whole forests were destroyed so that orchid collectors could be the only suppliers of a particular orchid - a very dark aspect of human nature..