We moved house 4 years ago to a red brick cottage on the outskirts of the country with a big garden where my husband could tend his allotment from the back  instead of having to rent one from the Parish (we are self sufficient in fruit and vegetables for most of the year).

My work study increased in size from a large single bedroom of our former home, to a decent sized double bedroom in our new place. There was a small downstairs study off the kitchen, but we've converted it into a pantry and laundry room.  I prefer being tucked away!

I've been managing with my research books in several different places including the built in wardrobes in the bedroom which have good shelving, but a couple of weeks ago we bought some book cases to replace the old extra desk and haphazard shelving behind my main desk. 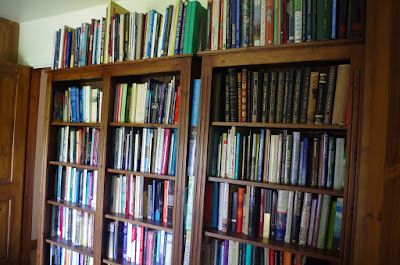 Happy as a pig in the proverbial, I have been sorting, arranging and cataloguing my reference book collection.  It is rather idiosyncratic in terms of order of books.  It's arranged by subject, beginning with cookery then going on to health, birth, old age, death, men, women, society, work, textiles and clothing etc and finishing up at primary sources.  There is also a top shelf for the big books, which I have yet to sort into order.
Some time ago I began a reference book blog to catalogue my titles.  When I became busy with my day job, that aspect fell by the wayside and I am gradually catching up.  If anyone wants to see my research library as far as I've written up, then here it is. Elizabeth Chadwick's Reference Books

If I could only take 10 of my research books to a desert island for a year, which ten would I choose?  I thought I'd post them here:

Outside of the 10, it goes without saying that I would HAVE to bring my copies of the History of William Marshal in translation volumes 1 and 2. Edited and translated by A J Holden and S. Gregory wih historical notes by David Crouch and published by the Anglo Norman Text Society.  They just have plain red board covers and wouldn't be very exciting to look at, but the content would keep me busy all year with ideas and first hand information about the life of a knight and courtier about his business in the late 12th century.

Now for the rest.

Not in any special order.
If you're only going to have one book about the Norman and Angevin period in England, it has to be this one.  It covers absolutely everything you ever wanted to know. Robert Bartlett is a genius. 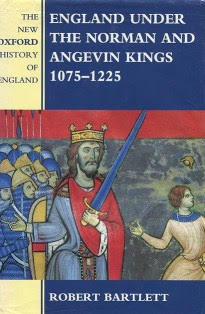 The next one is a fascinating read covering medieval trade. The routes, the products, the money exchanges.  Who would have thought that merchants brought back superior quality olive oil soap from Spain - from Castile to be precise! 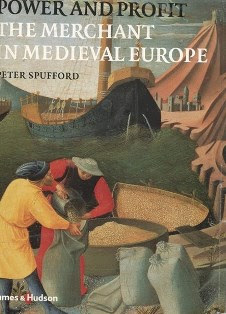 Book 3 is far more than just a cookery book.  It details how ovens were constructed, what fuels were used and how the whole dining system in a medieval castle worked.  So for example, the main meal tended to be eaten earlier in the day because cooking in the dark/dim lighting was something of a hazard. 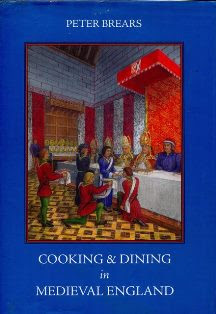 Book 4 is a fascinating book exploring what the Medievals thought about taste, smell, touch, sight and hearing. Some of their notions were very different to ours, but yes, they did bathe. The book makes it very clear. 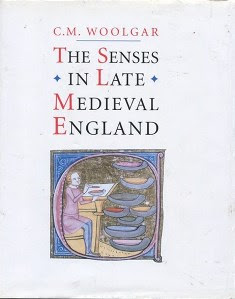 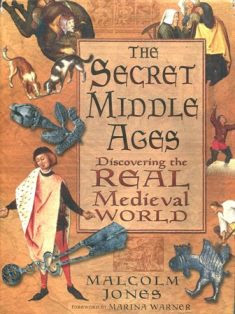 Number 6 I wouldn't be without on my desert island.  Essential reading for what daily life would have been like in the 12th century based on the observational writings of Alexander Nequam, whose mother was Richard the Lionheart's Wet Nurse. 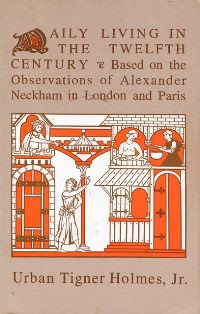 Next up, number 7 would be this one - mainly because although I've read it once, I need to read it again. I was fascinated to discover that all monkeys were called Robert in the Middle Ages - a fact I used to write a scene in The Winter Crown. 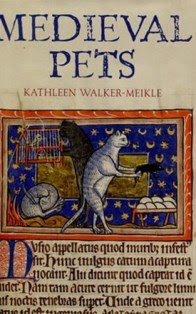 Number 8. I have to have something from Chronicler Gerald of Wales, if only because to paraphrase 'one should always have something sensational to read on the train' Gerald was never afraid of making things up if it improved the story! 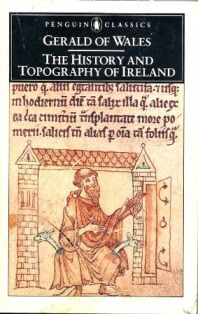 Number 9 is the best ever book on Eleanor of Aquitaine.  It may not look like anything from the cover but trust me it's wonderful. It's like tough stain remover on all the detritus that's been heaped on her down the centuries and that includes a large pile contributed by some modern biographers. 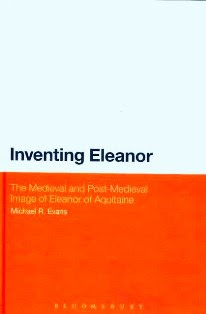 Last but not least, and remember this is only 10 favourite books not in order and could be replaced by 10 others completely different, The Survey of Medieval Winchester, which goes into all sorts of social detail about such items as waste disposal in the butchery process, and all the different occupations and what rules and regulations governed them in daily life. It also shows plans for the layout of a house owned by John FitzGilbert Marshal, hero of A PLACE BEYOND COURAGE. This one's huge and on the big book shelf. 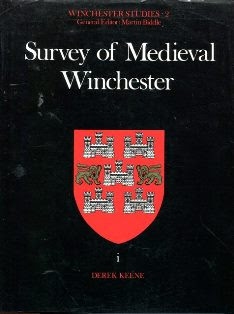 I have more books waiting to be sorted in my built in wardrobe book space, and I keep books for immediate use handy above my writing desk - held secure by a pair of kitsch but in subject keeping bookends!  Would probably have to hide them if we ever moved house again and had to show people round, but I think they're fun! 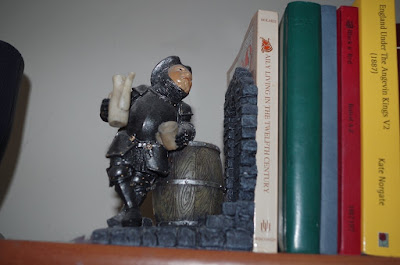 Elizabeth Chadwick's award winning novels are all set in the Middle Ages. She has just handed in the third book of her trilogy about Eleanor of Aquitaine - THE AUTUMN THRONE and isabout to begin work on her next project.

This is fantastic, Elizabth! And doesn't it just feel grand to be surrounded by such richness of thought and idea as you write? I love my bookshelves and often picture them on my blog posts, too. Good luck in your new writing space. It sounds lovely.

I just built a new home and the den which is huge is going to be my research library, thanks for the interesting idea on the sorting issue. Thought most of mine are of .Scotland, .England, and Colonial America history, I also have general books on medieval and other periods of history and wasn't sure how I wanted to shelve them. I love your list and found a few to add to my one library if I can find them.

Perfect timing for me as I'm looking for more 12thC books for my research - thank you.

Wish I'd read before I went into town. An hour ago I was in secondhand bookshop and I had first book on your list in my hand! I put it back as I thought it a bit expensive, now will have to make another trip into town!

I know nothing about your periods of interest, Elizabeth, so cannot comment on these ten titles but I am trying to find a good carpenter to build new bookshelves for my library. I was wondering where you found yours. Are they shop bought or built to measure?
My other point is for the readers of these Comments. Elizabeth's newly delivered manuscript, The Autumn Throne, has been read by her agent and editor and the feedback has been overwhelmingly favourable. I know this because they are FB friends of mine. Well done, Elizabeth.x

Carol, they were shop bought made to order. But they do custom. Very well made. I'll PM you the details on Facebook.
Thanks for the comments everyone. Desperate Housewife - yep you should have bought it! :-)

Excellent list! What time period does The Survey of Medieval Winchester cover?