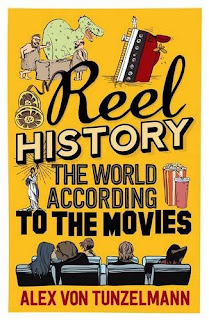 Alex von Tunzelmann is a damn fine historian (see Indian Summer and Red Heat). She is also extremely funny, especially when she’s angry about something, and she's a film buff. I have spent many happy hours arguing with her about films, normally with Robyn Young, Kate Williams and cocktails. In fact, I’m quite surprised that cocktails aren’t mentioned in the acknowledgements. Anyway, all this - the wit, the passion, the expertise and the whole-hearted engagement with popular culture - makes her the prefect person to write the Reel History column in the Guardian.

Each week since 2008 she has chosen a historical film - some of them new releases, some classics - and picked apart the history behind the story. She also gives the film a grade for both its entertainment value and its historical accuracy. There is a reason the column has been so popular. As well as being thoughtful and informative, they are often laugh out loud funny. Some of the best have been gathered together into a book, out on 1 October, and give us the film industry’s take on history from cave women in bikinis in 1,000,000 years BC to Wikileaks in Fifth Estate.

I asked her if the column began after an evening shouting at the TV or from a love of the genre. ‘Both. I’ve always loved historical fiction on the screen or in novels and often been completely swept away by the drama of a story, but even as a teenager I hooted at Braveheart. Historical fiction is a great way to get people interested in history, but the aim of the column and the book is to get people to ask questions about what they see. Historical films also raise amazing questions about how we think about the past.’ 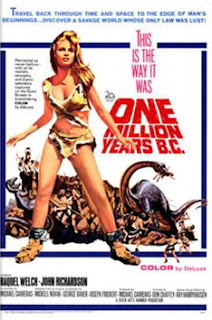 I wondered if she thought the Creationist Museum had been inspired by 1,000,000 years BC. She laughed. ‘No, of course not. But this stuff does have an impact. One of the most obvious examples is the galley slaves in Ben Hur. The Romans hardly ever used slaves to row - it was a skilled job and they were trained artisans, but the idea of the galley slave has become a cultural reference point - we talk about ‘working like a galley slave’ - it can be quite a struggle to convince people it isn’t true.’ Are we so easily influenced though? ‘Of course people aren’t stupid, people understand they are watching a fiction not a documentary, but the danger isn’t when you see the film - it comes 20 years after you’ve watched it. Movies leave a strong impression so if someone asks you about William Wallace you might think, oh yes didn’t he invade England and father Edward III? You forget where you got your information from. That’s what you remember - not that you saw it in a rubbish Mel Gibson movie.’ 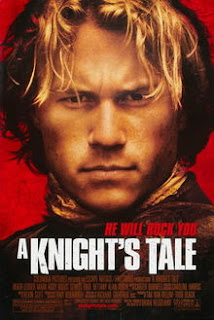 So is accuracy king? ‘I don’t want to be the fun police. It would be sad to lay down rules, you’ve got to let people play, be creative and invent. We can be far too respectful of the past.’ Alex is a fan of both Bill and Ted’s Excellent Adventure and The Knight’s Tale which is ‘very silly and highly enjoyable’. After all ‘people in history made jokes, so why shouldn’t we?’

There are though many subtleties in how we consume our past through fiction, and again it’s to Alex’s credit that these come out in the book as well as the excellent jokes. ‘I don’t have a problem when a film is fiction but knows it and is having fun, but there are some films which are pushing an agenda. Most people believe they can tell the difference between a proper movie and a propaganda movie, but sometimes that line is rather more blurred than they think.’

So do historical films tell us as much about the time in which they are made as the time they are supposed to be reflecting? What will future generations think of us for watching Downton Abbey? She sighs. ‘We live in a time of huge economic divides, so perhaps it's not a surprise that there’s this rosy nostalgia for a fake aristocratic past when the rich people in charge were all very nice.’

It's a fantastic book for fans of history and film alike - do buy it. You can also follow Alex on twitter https://twitter.com/alexvtunzelmann

I am a lot more tolerant of historical films where the creators have researched their subject and love it. The Knight's Tale is a case in point. Yes, it can be watched on a level of silly fun, but to those in the know it is stuffed with quotes and knowledge of the period used in a fun, playful and ironic way. I noticed several from the early 13thC Histoire de Guillaume le Mareschal dropped very neatly into the script where they flow and you wouldn't notice unless you were familiar with the Histoire. These people may have had a lot of fun with that film and made a mash up of many of the elements but it was very clear they knew - and understood - their material in depth, and that's what makes a big difference.

You beat me to it Imogen, I was thinking of featuring Alex and the new book of her brilliant Reel History column, on 28th! Funnily enough I watched A Knight's Tale with my daughters last night, and wondered whether the little one would come across Chaucer later and imagine him running from debtors in his birthday suit...