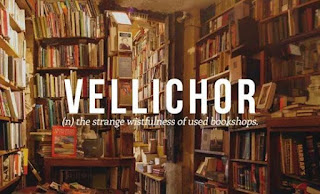 VELLICHOR: n. the strange wistfulness of used bookstores, which are somehow infused with the passage of time—filled with thousands of old books you’ll never have time to read, each of which is itself locked in its own era, bound and dated and papered over like an old room the author abandoned years ago, a hidden annex littered with thoughts left just as they were on the day they were captured.

From the Dictionary of Obscure Sorrows

Of all the things I miss in the desert, libraries and second hand book stores are high on the list. I miss everything about them - the serendipity of finding an out of print book which you didn't know you needed, or precisely the book you had been looking for for ages. I like to think of the people who've read the books before you. It's almost like their ghosts are watching over your shoulder as you browse the stacks, tapping you on the shoulder when you reach the book you need. It doesn't suit everyone. In London I spent most lunch hours writing in Chelsea Library, but the secretary in the gallery had a pathological hatred of old books (I think based on the germs she imagined they harboured). Am I imagining it, or did old library books have stamps in them about alerting the librarian if someone with a contagious disease had handled the book? Perhaps this was the root of her paranoia.

The smell of old books is a particular joy - grass, leather, almond, vanilla. It's caused by the breakdown of the compounds in the paper: 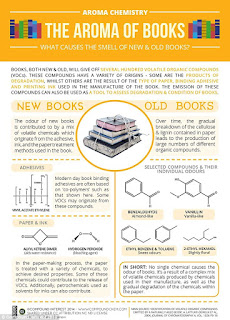 As a perfume junkie, I'm drawn to bookish smells - a current favourite is True Grace's 'Library' which is woody and smoky. One I'm dying to try is Brosius' 'In the Library', 'a warm blend of English Novel*, Russian & Moroccan Leather Bindings, Worn Cloth and a hint of Wood Polish.' He said:

"The main note in this scent was copied from one of my favorite novels originally published in 1927. I happened to find a signed first edition in pristine condition many years ago in London. I was more than a little excited because there were only ever a hundred of these in the first place. It had a marvellous warm woody slightly sweet smell and I set about immediately to bottle it."

Last time we were home, I managed to find a less than pristine first edition of an old favourite. Are there books you have multiple copies of? There are copies of 'The Leopard' in storage in two places, plus a recent Vintage reissue here, but I still couldn't resist this battered old friend with its 'withdrawn' stamps from 'John Orr's Lending Library'. Flicking through the pages in the desert, the smell transports me back to the old bookstore by the river, and the words to the first time I read it in Chelsea library twenty five years ago. Books really are magic, aren't they? 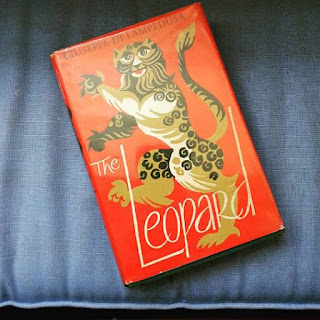 "Of all the things I miss in the desert, libraries and second hand book stores are high on the list." What a great opening sentence! Thanks for this post -

One of the best smells in the world - an old book. When I lived in Covent Garden I used to spend Saturday afternoons sepulchred in the basements of those second hand bookshops in Charing Cross Road. I used to come home smelling like an old book myself. No complaints.
lovely post, thank you.

Marvellous word - is it real? And 'in the desert'; so intriguing! Which desert, and what are you doing there?

I have multiple copies of several Graham Greene novels. Are there Arabic bookshops there? Surely, yes. Their literary history and knowledge of bookbinding and calligraphy is second to none. LOvely post, Kate.