THE FALLEN WOMAN by Eleanor Updale

Today, a new exhibition opens at the Foundling Museum in London.

With a special emphasis on Victorian times, it is an exploration of society's attitude to, and depiction of, women who were caught straying outside the conventional bounds of sexual behaviour: caught so often because their pregnant bellies or fatherless babes told the tale of what they had been up to.

Thanks to a habit of donation started by William Hogarth (one of its original benefactors) the Foundling Hospital became the first public art gallery in the UK, so it is appropriate that this exhibition is illustrated with paintings by some of the most celebrated artists of the period it discusses. They include Dante Gabriel Rossetti, George Frederic Watts, and those whose work is shown on this page.  Using art, music, newspaper reports, artefacts and records from the Foundling Hospital archives - and with reference to fictional, as well as real unmarried mothers of the time - the exhibition describes their plight.  They were likely to be rejected by their families, unable to find work or other support, and to face the prospect of the workhouse and an early death for themselves and their children. 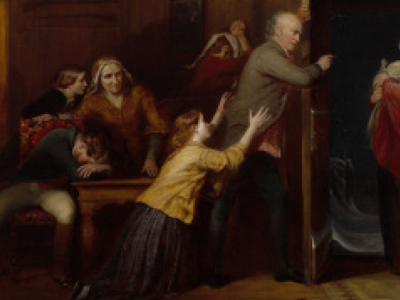 
photograph by John Hammond
The hypocrisy of blaming everything on the woman was not lost on the painters or on many social commentators of the time. Yet the artists weren't just pointing out double standards in a society where male sexual incontinence was accepted, or even condoned. There was also an element of salaciousness in some of the visual warnings about the distress dishonour could bring. To depict the women was also to invite speculation about what they had done, how, and with whom. 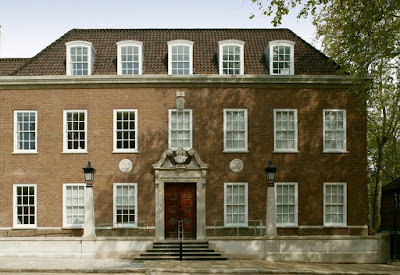 The museum, on the site of the original Foundling Hospital, is an ideal location for such an exhibition.  The curator, Professor Lynda Nead, examines much more than the plight of 'Foundling' mothers, but they, of course, are at the heart of the display.


The exhibition takes us through the emotionally searing process by which a mother might secure her child's admission to the Hospital.  First there was a trip to the porter's lodge to collect an application form. The porter kept a notebook in which he assessed each woman's appearance. His emphasis was on a quality that hangs over the entire exhibition: respectability. By the mid nineteenth century, almost 100 years into its existence, the Foundling Hospital had abandoned its original 'first come first served' policy, and an experiment with random balloting. The Hospital authorities shifted their attention from the children to the mothers, and the women they were most willing to help were those who, to their minds, carried the least 'guilt' and showed the best potential for rehabilitation.
It was not only the babies who were to be 'saved'.


Although there can be no doubt that many of the children were the result of consensual intimacy, and others of exploitative relationships or even rape, the story that the then governors of the hospital wanted to hear was of the 'fallen' woman. She had strayed or allowed herself to be seduced, and for her child to be worthy of rescue from the harsh life a single parent could offer, she must show shame and regret.
For that reason, each applicant had to write a petition, recounting the circumstances that had led to the birth, and pleading for her child's acceptance. The exhibition includes a sound installation by the musician Steve Lewinson, drawing on the archives with the aim of bringing the petitioners' voices to life.
Of course, women came to know of the requirements for entry, and their petitions were crafted accordingly. It's important to exercise a certain amount of caution before assuming that they convey a completely accurate picture of lifestyles or circumstances.
To be successful in finding care for her child, a woman had to show that this was her first 'mistake' (an assertion that might be supported by anatomical evidence from a midwife). She had to construct a narrative that suggested she had been led astray, and possibly that her very innocence had made her vulnerable to manipulation.
All this was put to the test at an interview. It was a process that needed deliberate preparation, and possibly assistance from someone who could help with writing the petition, or supply clothes for the public appearance. There's a grotesque parallel with some of the contortions modern day aspirational parents put themselves though for the sake of their children's education, but I won't go into that here.


The interviews probably took place in one of the rooms depicted in a painting on display in the exhibition.
In the background you can see some of the donated pictures which made the Foundling Hospital such a successful visitor attraction. The room itself was saved when the original Foundling Hospital was demolished between the Wars, and was reconstructed in the 1930s building that is now the Museum.

I have written a little here before about my father's experiences in the Foundling Hospital. He spent his entire childhood there, just after the period examined in this exhibition, having been admitted as a baby in 1913.  After he died - unaware of his origins - in the mid 1970s, the law was changed, and in 1985 I was told something of his back story. The narrative was identical to so many in the exhibition. A young woman was promised marriage, tricked into anticipating the vows, and then abandoned. Her petition told how her fiancé had fled to America, leaving her alone.
I know now, after some research, that the man was in London throughout. It must have been necessary for my grandmother to make up that part of the story to paint herself as the right kind of victim.
It intrigues me that, more than a century on from the period covered by this exhibition, the the person in charge of the Foundling Hospital archives felt it necessary, when giving me the 'facts', to stress that my grandmother was 'respectable'.

Why should it have mattered? After all, who could be more deserving of public or philanthropic support than the innocent child of truly dissolute parents?  At first sight, the Victorian obsession with worthiness seems ridiculous, or at least rather quaint. But do we persist today in penalising the children of those we regard as 'undeserving'?  Why is it that we find ourselves able to accept a care system so bad that its 'beneficiaries' often leave 'care' woefully unprepared for adult life, and with few of the supports other children now expect well into their twenties? According to the Who Cares Trust, almost 40% of prisoners aged under 21 were in care as children. A quarter of young women leaving care are pregnant or already mothers, and only 13.2% of children in care obtain five good GCSEs - compared with 57.9% of all children.*
Are we so relaxed about consigning those children to a bleak future because we think it's all they deserve?  Do we see it as the inevitable consequence of the inadequacies of their parents? Are we in any position to sneer at the Victorian moralists, or to set ourselves up as so very different from them?

We may scoff at the Victorian obsession with 'respectability'.  It may seem to have been an odd criterion for rationing places in an orphanage, and I know that many of the children raised in the Foundling Hospital were not allowed to forget their mothers' sins.  But for all the shortcomings of the institution, the lucky children whose mothers passed the entrance test were given the tools to forge a future and to raise families of their own. I know now that my grandmother went on to marry and to have 'legitimate' children.  I have no idea whether she ever told them of her past.  She can never have known what happened to her son, whose name was changed on the day she gave him away. I'm grateful to live in an era when I am not expected to carry her 'shame' with me, but grateful too that she was spared the fate of so many fallen women and that, thanks to the Foundling Hospital, my family has survived and prospered ever since.
At least, when she 'fell', somebody caught the baby. 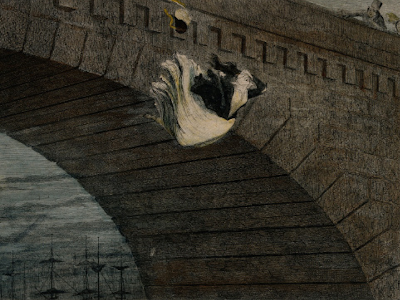 George Cruikshank, A destitute girl throws herself from a bridge,
1848 © Wellcome Library,London

Here are details of the exhibition:

Thanks for this, Eleanor - a heart-rending topic and an amazing museum.

Wow. What a wonderful post. I visited the Foundling Hospital some years ago when they had an exhibition of the small pieces of cloth left with the children as tokens - in case the mother should ever be able to reclaim them. Heartbreaking stuff, and as you say not without modern parallels.

I have read many comments on the heartrending plight of women who tried to leave their children here, but never one that commented on the apparently ongoing need for people to distinguish between deserving and undeserving. Good point, well made, thank you.

Very moving and apt. And as you say 'care children' are treated disgracefully nowadays. The thing that horrifies me is that rape victims used to be treated as 'fallen women' and it was expected that they would show penitence - for what, one asks? And yet rape survivors still find themselves blamed. I am glad someone did catch your father!


What happens to women who go to shelters or places set up to deal with "victims of rape" is another area of modern life where a victim is required to present herself in a perspective that makes her at once wholly innocent of any complicity in what was wreaked on her and to appear to conform to middle class norms, which regard her as degraded. Michelle Fine has collected a group of essays under the title, Disruptive Voices, which includes several areas where the same sort of "means" test that leads to distortions of evidence is conducted. The women can end up punished or lose their children if they are abused wives/mothers.

Very moving and fascinating! I saw the same exhibition as Katherine L and it was superb!

Very moving and fascinating! I saw the same exhibition as Katherine L and it was superb!