The historical novels I love to read (and hopefully write) transport me to the past. They make me hear it, feel it, smell it, taste it. Most of all, they make me SEE the past. As a visual thinker that is what is what I crave most. 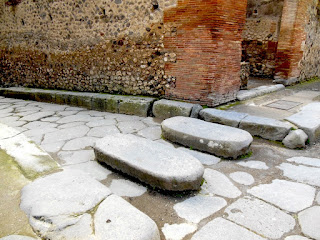 When I wrote my Roman Mysteries set in Ancient Rome, I had the ruins of Ostia and Pompeii to inspire me, along with the well-preserved frescoes, sculptures and mosaics, and all the art and movies that attempt to envision those places. I know Pompeii better than I know cities on America's east coast. 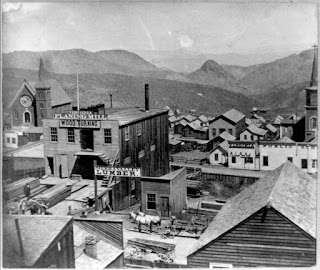 When I was writing my P.K. Pinkerton Mysteries, set in Nevada in 1862, I found that photography had been invented just in time to let me look into the past. There were even stereographic photographs that let me gaze into canyons, along railway lines and over the roofs of Virginia City at exactly the times my books were set.

Now I’m working on a book set in Roman Britain during the last decade of the first century. Pre-Trajanic Londinium is not as well-preserved as Pompeii or as well-documented that Virginia City in the 1860s. Scholars are not even sure who the governor of Britannia was in AD 94, the year my book is set.

Luckily, London offers some fabulous resources. The British Museum has rooms devoted to stunning artefacts like the Snettisham hoard and the Vindolanda tablets.

The Museum of London (MOL) is even better. Not only does it have bits of the original Roman wall poking up around it, but it has replica Roman rooms, street scenes, delicious artefacts and 3-D models of Londinium’s port and forum.

They go above and beyond. The MOL stages gladiatorial combats with dedicated re-enactors like those put on last month. Their archaeologists give regular tours of the underground amphitheatre, hidden bathhouses and Thames foreshore. The tech guys at the MOL have even produced a brilliant app of Londinium with an interactive map: you can ‘dig up’ artefacts, listen to ancient street sounds and watch ancient Romans superimposed on modern streets.

But as I was making a pass over my second draft of my Roman Britain book last week, I wasn’t seeing it.

For me to write something clearly enough for nine-year-olds to get it, I have to get it first. And I was confused. How did the north bank differ from the south? When were the city walls built again? How extensive were the wharves? What was the main building material? What did Londinium look like?

Then I stumbled across a wonderful resource on the Museum of London’s website: the paintings of Alan Sorrell. It was just what I needed: postcards of the world I was writing. Bird’s eye views of the streets and buildings. Inspired vignettes of daily life with great attention to archaeological and historical detail.

A commercial artist who worked in many mediums and on many projects, Alan Sorrell (1904 – 1974) first studied art at Southend and later at the RCA in London and Rome. He spent WWII in the air force. After the war he worked closely with some of the most respected archaeologists of the day. His 'neo-Romantic' training accounts for the often moody lighting of his work. His time with the RAF is reflected in his fondness for aerial views. And his attention to historical detail attests his collaboration with scholars.


An atmospheric watercolour of London’s Praetorium (Governor's Palace) shows all the features mentioned by Peter Marsden, its excavator. This is one of Londinium’s lesser-known but great buildings (now totally covered by Cannon Street Station.) As soon as I saw it, I knew it would be the setting for a key scene at the heart of my book. With Sorrell’s illustration alongside the sparse archaeological plan and dry written accounts of this structure, I can now write a believable setting for my scene.

Sorrell’s watercolour of the wells beside the Walbrook reminded me to include rubbish heaps in my Londinium. His red-painted goose-neck on theBlackfriars barge encouraged me to add more colour. His aerial view of Londonin the time of Hadrian prompted me to check whether London Bridge had a drawbridge in the mid 90s. The answer is we don’t know, so I’ll have to use my instincts.

Like authors of historical fiction, archaeological artists also need to use flashes of creative instinct when fleshing out the dry bones of the facts. In a preliminary sketch of 3rd century Londinium, Sorrell felt he should give the Roman city a river wall. A notation on his sketch shows that he was asked to remove it for the final painting as there were no remains of such a wall. His theory was justified however, when a few months after his death evidence of a riverside wall was indeed found.

Sorrell’s diligently researched and inspired paintings have finally helped me ‘get’ Roman London.

I am grateful to his family and fans who have made his work available to the world.

A superb paper on his life and output has been made publicly available on Academia.

I need 3D visual understanding too Caroline, so I totally emphasised with your post. I have Sorrell's work 'Reconstructing the Past' which is full of his drawings and paintings from the Roman, Saxon and Medieval periods. Priceless.

Thank you for this post, Caroline. I have always loved Alan Sorrell's reconstructions, which are so beautiful as well as being full of accurate detail. Looking forward to your Roman British series.

I loved the photo of mudlarking with the archaeologist on the banks of the Thames in London. Every time I see those muddy banks I long get out there and do that, imagining all the things still down in that mud waiting to be discovered.