I had a new book out in late July. Which was weird because I didn't see it until mid August because I was in Europe when it appeared.
I arrived at a friend's house in Germany and she (being a wonderful friend) had ordered a copy. That was my first glimpse of the print edition. Cue squeaks of excitement. 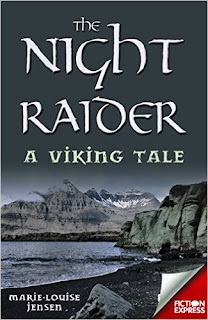 The book is a short novel for younger readers and was originally written as an interactive e-book for 10-11 year olds in schools.
Educational publishing - that strange animal, where not offending religious schools takes precedence over what people believed in the past.

Because let's not beat about the bush; the Norse believed in shape-shifting. In the saga of Egil Skallagrimson (not a tale for the faint hearted and certainly not for children) we are told in quite a matter of fact way that Egil's grandfather was known to be a shape-shifter. He was even called Kveld-Ulf (Evening Wolf.) Egil himself has beserker tendencies and behaves a lot more like a werewolf than a man a lot of the time, splitting enemies heads open with axes and other charming incidents.

The Christanisation of Iceland happened peacefully shortly after his death and his son had his body exhumed and reburied near the chapel that was built on his land. I can't believe he'd have been happy with that. He was a true pagan. Forgiveness and meekness were totally alien to him.

By all accounts, the official acceptance of Christianity in Iceland was a formality. The country was threatened with conversion by force from Norway if the population didn't accept the new god. Sensibly, they accepted him and privately continued with their worship of the Norse gods for many years. To this day, the majority of Icelanders confess to believing in 'The Hidden Folk,' - elves.

But my 'werewolf' wasn't allowed to be real. Which was fine. It made for a perfectly good mystery story anyway. But the people of Viking-age Iceland would have had no trouble believing in werewolves. I should think they'd have been more astonished if you said such things didn't exist. Even after the arrival of Christianity. Werewolves, trolls, elves, ghosts and other supernatural beings were an indisputable part of the rich and brutal fabric of their world.