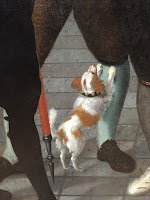 It is no secret that I'm a dog lover and a recent research trip to look at Dutch art offered up a multitude of painted canines which brought to mind the dogs in my novels.  My work is teeming with  the creatures but they are not only included on authorial whim, the beloved pets of my protagonists can more often than not be found in the historical record.

The first of these is Katherine Parr's dog Rig who is featured in Queen's Gambit. When I was first researching the book I visited Sudeley Castle where Queen Katherine died. There are a few personal items that belonged to her in the collection there: a love letter she wrote to Thomas Seymour before they married, as well as a lock of her hair and a tooth, both taken from her grave when it was rediscovered in the eighteenth century. It was the tooth, clearly an item of great sentimental significance to have been buried with her, that particularly resonated for me. It was not a human tooth and seemed to have once belonged to a small dog. Knowing about her dog Rig I thought it possible that this was a carefully kept relic from a beloved pet. From this I gained a glimpse of understanding across the years about my protagonist and her love for her canine companion. 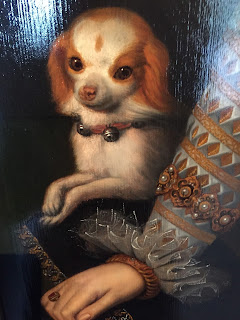 Many women in the Tudor court had small dogs, as we can see from the portraiture of the period. An amusing anecdote which made it into Queen's Gambit is that of Katherine Parr's dear friend and fellow religious reformer, the Duchess of Suffolk, who named her dog Gardiner. Seemingly innocuous, the name was in fact an audacious dig at her enemy Bishop Gardiner a religious conservative who would eventually attempt, and nearly succeed, to topple Queen Katherine.

Another Katherine, Lady Katherine Grey, of my second novel Sisters of Treason, had a great love of animals and kept a number of dogs. We know this because it is recorded that her pets, canines amongst them, destroyed the furniture in her rooms when she was imprisoned in the Tower of London. I characterised her as a girl who loved to be loved and what more fitting a symbol of this than a pack of small, adoring dogs. We have no names for her pets so I had to invent them and one, Stan, has a story of his own. As I was writing the first scene of Katherine Grey surrounded by her pets my editor emailed to say that her much loved terrier had died, so I thought it fitting to name one of Katherine's puppies in memory of him. 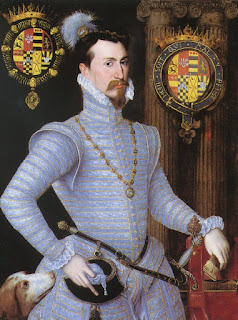 Dogs feature again in Watch the Lady but my protagonist, Penelope Devereux's puppy Fides is pure invention. I have included however The Earl of Leicester's old russet and white hound, who wanders about lost at Wanstead after his owner's death. This dog was taken from a painting from the mid 1560s where such a hound can be found in the corner of the image gazing lovingly at his master.

Dogs were often included in portraits to signify fidelity and presumably the hound here is included as a demonstration of Leicester's loyalty to Queen Elizabeth, who favoured him and many believed might marry him. Interestingly though, he is said to have had a flirtation with one of the Queen's maids Lettice Knollys (later to become his wife) in 1565 and by 1568 he was conducting a liaison with the recently widowed Lady Sheffield, who maintained they had married in secret even on her deathbed. This was never proven and the son they produced was named a bastard. In the light of this it is amusing to speculate that the dog in the painting might well be there more as a way to cover Leicester's disloyalty, than to indicate his faithfulness. 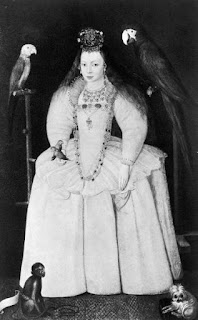 There is a delightful picture of Arbella Stuart, the heroine of my next novel, with two parrots, a pair of finches, a monkey and a small white dog. I rather fancifully took this dog to be Geddon, Mary Queen of Scot's Skye terrier who it is said had to be prised from her decapitated corpse. I have imagined that the animal found its way back to  Arbella at Chatsworth with Mary's host/jailer, the Earl of Shrewsbury, who was Arbella's step grandfather. Another portrait of Arbella in later life, shows her with a tan and white spaniel tucked in the crook of her arm. In the novel this little dog, which I named Ruff, becomes the device by which she encounters someone who is to change the course of her life.

It's hard to imagine creating the world of a novel without including the creatures that were so much part of the fabric of life in the sixteenth and seventeenth century, either as pets or working animals. For me they are a means to conjure the past and also a way to help draw my characters. The way an individual responds to the  animals, as well as the people, around them can reveal a great deal about their personality.


Find out more about Elizabeth Fremantle's books on her website elizabethfremantle.com

Very interesting post. I love putting dogs and other animals into the picture. Kathleen Walker Meikle has written a book Medieval Pets which goes into the subject in depth and I've found it invaluable.
I was wondering why Katherine Parr called her dog Rig. What's the significance of the name?

I did an event in the MacManus Gallery in Dundee once, in a room full of historical paintings. Half the audience had arrived and the other half had got lost. I set the children the task of counting the dogs in the paintings while we waited. 24! And it wasn't that big a room!

Thanks so much, Elizabeth. the Meikle book sounds wonderful. I must look it out. I've not been able to find out the significance of Rig's name.