The First Authenticated European Discoveries of Australia by Rosemary Hayes

School children all over the world (Australia included) think that Captain Cook ‘discovered’ Australia.  He did not – as he was the first to admit – but the myth persists.  However, the Western Australian Government is doing its best to put the record straight.

There were other, much earlier, discoveries and they will be celebrated, big time, next year.

The Duyfken (Little Dove) was a fast, lightly armed ship probably intended for shallow water, small valuable cargoes, bringing messages, sending provisions, or privateering.  Her tonnage was between 50 and 60 tons.

In 1601 the Duyfken sailed from Texel as the jacht (scout) to accompany the first Dutch fleet to the Spice Islands. When the fleet reached Bantam (then the most important port in Java) they drove away a blockading Portuguese fleet thus ending the dominance of the Iberians in the spice trade.

After that, Duyfken had an exciting few years. On the voyage home from the Indies she was separated from the rest of the fleet in a storm but made it back before the others. On the next journey out to the Indies, in 1603, the fleet captured a Portuguese ship in Mozambique Channel and in 1605 she took part in the recapture of the fort of Van Verre at Ambon Island (part of the Maluku Islands of Indonesia).

So Duyfken had already had many adventures before the Dutch East India Company (VOC) sent her, in 1605, captained by Willem Janszoon, to search for trade opportunities in the ‘south and east lands’ beyond the furthest reaches of the known world. 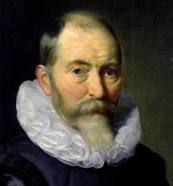 Janszoon took the ship along the south coast of New Guinea, continued east-southeast and, in early 1606, encountered and then charted the shores of Australia’s Cape York Peninsula. The ship made landfall at the Pennefather River in the Gulf of Carpentaria – the first authenticated landing on Australian soil. 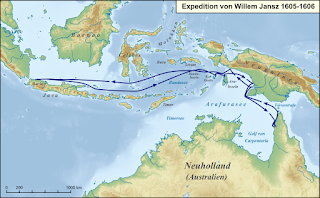 Such was the importance of this little ship that, after many years of lobbying, the Duyfken Replica Project was formed and a full sized reproduction was launched on 24th January 1999 in Fremantle, Western Australia.  Since then she’s made goodwill tours all over Australia and to Sri Lanka, Mauritis, South Africa and the Netherlands. 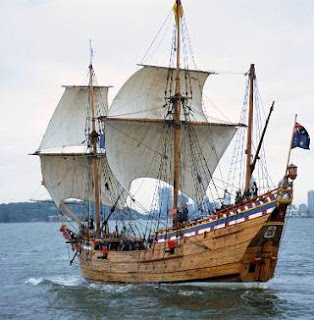 And in October 2016, she will sail up the coast from Perth, WA, to take part in an event to commemorate another significant date in Australia’s history. 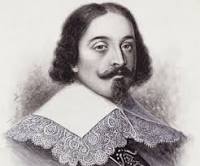 The Eendracht became separated from the rest of the fleet in a storm and continued the journey to Java alone.  On October 25th 1616, he and his crew came unexpectedly upon ‘various islands, which were, however, found uninhabited’.  He made landfall at an island off the coast of Shark Bay, Western Australia, which now bears his name. 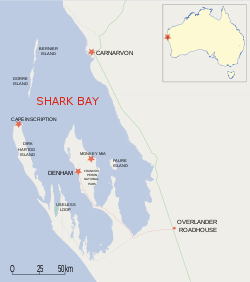 He spent three days examining the coast and nearby islands and when he left he fixed a pewter plate to a post.  On the plate he had scratched a record of his visit.  Its inscription (translated from the Dutch) reads:

This plate is the oldest known artifact of European exploration in Australia still in existence.

Finding nothing of interest, Hartog continued sailing northwards along this previously undiscovered coastline of Western Australia, making nautical charts up to about 22 degrees latitude south. He then left the coast and continued on the Batavia (present day Java) eventually arriving safely in December 1616, some five months after his expected arrival.

These 17th century mariners must have been incredibly brave, sailing in uncharted waters without any way of measuring longitude.

To commemorate the 400th anniversary of Dirk Hartog’s landing, the Western Australian Government and others are funding some major regeneration in and around Dirk Hartog Island, educational projects to raise awareness of the State’s early European history and a huge programme of celebrations.

Celebrations which I hope to be attending.  Watch this space!