I first fell for Sardinia eight or nine years ago, on a summer house swap. Even the milk cartons charmed me. They used to show a cow standing in front of a crumbling nuraghe – a circular, dry-stone wall structure with a passing resemblance to a Scottish broch, but built considerably earlier, in the Bronze Age.

We went to visit one nuraghic site near where we were staying (possibly S’Ortali ‘e Su Monti, near Tortolí) and I have a vague memory of dappled shade, intriguing arrangements of stone, and a very petite guide telling us how incredibly tall the nuraghic people must have been  - at least  5’8”!  But I had four small children in tow, mobile internet wasn’t really ‘a thing’, and when I got back home I never found time to investigate further.

Returning for another family holiday last month, I found the milk cartons replaced by dull plastic bottles. But I also discovered that in the last twenty years the official number of the megalithic towers found on the island has risen almost three-fold to 20,000, and that each one was once in sight of another. Earlier assumptions that their primary purpose was military or defensive are being overturned.

As an infectiously enthusiastic guide at the cliff-top site of Nuraghe Mannu explained, ancient Sardinia – mountainous, richly wooded and presumably well-watered in the days before it effectively became a colonial outpost, supplying wood and minerals for a variety of conquerors over the centuries, including of course Rome, both ancient and modern – must surely have been populated by communities who collaborated rather than fighting with each other.  They communicated their sophisticated building techniques and shared other knowledge and beliefs in ways at which we can now only guess.


Nuraghe Mannu is one of the easiest sites to get to.  We made a very early start to climb up to another, Tiscali, before the August heat became too intense.  The ruins of this village, well-hidden in a partially collapsed mountain-top cave, a great round karstic sinkhole, date from the very end of the Nuraghic era, or maybe later, first or second century A.D./C.E.

It’s thought by some to have been a place of refuge at a time when Sardinians were just managing to hold out against the Roman invaders: it’s in the wild area still named Barbagia after Cicero’s description of it as a place of barbarians, and Tiscali remains dramatically and enchantingly inaccessible.  Sadly though, thanks to its remoteness and the fact that it’s only recently been guarded, the site has been repeatedly plundered in the decades since its discovery, leaving it richer in atmosphere than artefacts.

I’ve rarely been anywhere so utterly silent.  Not even a cicada could be heard so early in the day.  And we had the place to ourselves, which I think always makes the mental shift required for imaginative reconstruction a little easier.  Still, I confess I struggled a little to picture the place swarming with people and animals.

A few days previously, reaching the well temple of Su Tempiesu, still in perfect working order three and a half millennia since it was built, had involved another delightful, steep but altogether shorter walk, through cork oaks, juniper, fennel and fragrant myrtle.

Before we set off, another inspiring and friendly guide showed us around the models, photographs and reproduction bronzetti in the little museum at the top, and explained in patiently slow Italian that the top of the building – originally a truncated pyramid, with twenty votive bronze swords stuck into it with molten lead - had been found in 1953 when the hillside was being terraced to grow tomatoes. 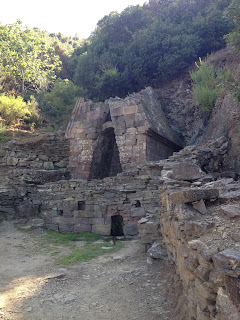 It was immediately obvious that something
special was buried beneath the soil as the stones they uncovered were hewn basalt, a volcanic rock which must have been brought to this schist region from at least thirty kilometres away.  The whole complex seems to have been buried by a landslide.  I could absolutely picture the excitement of this discovery, and further investigations thirty years later when the full brilliance of Su Tempiesu’s hydraulic engineering was uncovered as a third, lower pool was unearthed, complete with channels.  Much harder though was visualising the ceremonies that once took place here, and what the significance of its alignment to the equinoxes might have been.

At Nuraghe Mannu, climbing up the steps of a single tower, 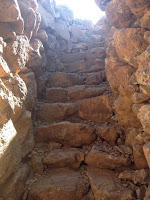 I looked down onto a dense network of low walls spreading out into the undergrowth, wondered exactly who had lived in these houses, and thought how easy I’d had it so far.  Since I started writing historical fiction, I’ve worked in periods so recent I could draw not just on written sources, published and unpublished, but photography, film, and music, never mind artifacts with obvious functions.  I’m not sure if I’ve got the right kind of imagination to take myself back three thousand years or more, to times and places where the evidence is still so sparse, so much archaeological investigation still needs to be done, and about which interpretations are constantly changing.  (In fact, I came home to find this article linking nuraghic Sardinia to Atlantis…) I’d love to know how more daring authors go about this.  I’d find it a truly dizzying prospect, but perhaps others discover a liberation in the mystery and temporal distance? 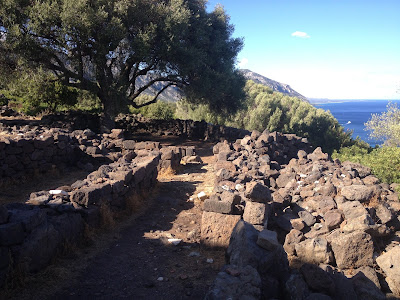 Some practical stuff if you are in Sardinia:

As you’ll have gathered, there are nuraghic remains all over the island, so you’re sure to find something near by.  Both Tiscali and Su Tempiesu are well worth going off the beaten track for.  For Su Tempiesu, drive to Orune, and you’ll easily pick up signs from the village.  Guidebooks suggest that the walk to Tiscali is much harder than it actually is, and that you might need a guide! Actually, it’s clearly signposted, once you're on the right road from Dorgali, except from the carpark at the bottom, but you just need to keep following the track down to the river bed and over the bridge and then you’ll see the first sign taking you off to the right.  There are a few steep rocky bits on the way up, but nothing very serious and it's lovely and shady a great deal of the way.  If you are reasonably fit you should manage it in 1.5 or 2 hours, allowing the same amount of time to come back down again, but do take plenty of water. And five euros to get in!  I hadn’t found this before we went, but this map could be very useful.

Thanks for this - the world is so full of places I want to go, and I've now added Sardinia to the list!

I'd definitely make it high!

Very interesting. The line-of-sight aspect of the towers is similar to the pyramid complexes in Egypt that run the old Nile river course. With a simple code employing fire at night or smoke during the day, critical "news" can be communicated great distances in a very short time. (This account also brings to mind sacrificial rituals at fire temples, which were elevated and aligned to solar points in many parts of the world. Google "Strabo fire temple" for some provocative ideas for the historical imagination. )