Things to do in Brussels - by Sue Purkiss

You quite often see a little bit of Brussels on TV, don't you? It's generally a bit of one of the European Commission or Parliament buildings, used as a backdrop for a reporter relating the latest bit of news about some aspect of EU policy, or the latest twist or turn in Britain's tortuous relationship with Europe.

But there is much more to Brussels than this. Well, everybody knows about the chocolate and the beer, and lots of people know about the Manneken Pis, the little statue of the small boy having a pee. (But did you know that in one of the beautiful baroque buildings in the Grande Place, there is a display of the many little outfits in which, over the years, the little statue has been dressed for special occasions...?)

We go to Brussels quite often - we have family there, including two grandchildren. We're just back from there now, and here, to give you a flavour of the city, are some of the things we saw and did. 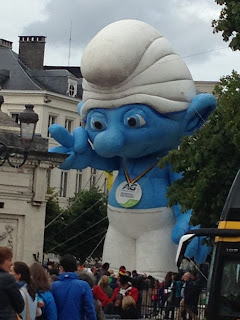 You may recognise that this is a Smurf. Quite a large one. Apart from chocolate and beer, Brussels' other great export is comic strips. The Smurfs, Asterix, and my elder grandson's personal favourite, Tintin, all hail from Belgium, and the weekend before last, there was a comic strip festival in the big square in front of the royal palace. Everyone was there: several Tintins, Captain Haddocks and Snowies; Asterix, Obelix, and heaven knows who else, all inexplicably playing musical instruments; ditto more Smurfs; and to top it all off, there was a Tintin Car Rally. This consisted largely of cars which had appeared in one or other of Herge's books, along with a few interlopers - notably a Batmobile. 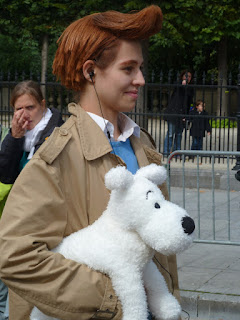 Here's Tintin (whisper it softly, but I think he was a girl) and Snowy. 'He' strolled about smiling enigmatically and posing for photographs. 'He may not have been a dead ringer for Tintin, but he certainly had style. 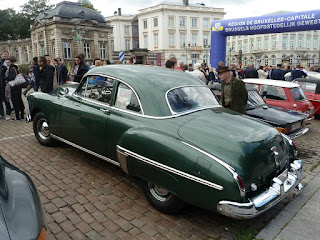 This was the star of the cars - an Oldsmobile, lovingly cared for and the subject of much admiration. 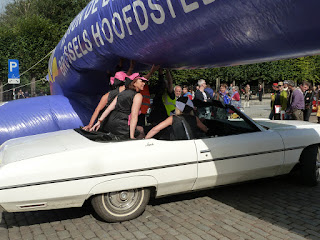 The cars entered the square under an inflatable purple archway. But when this glamorous car load arrived, the archway was quite overcome and promptly collapsed, which the ladies in the back seat thought was hilarious.

The whole thing was very relaxed, with cars and people milling about, much eating of chips, churros, waffles and ice cream, and not a health-and-safety rule in sight. 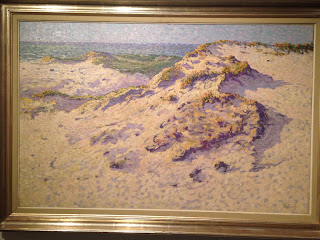 For our next outing, we hunted down the Musee d'Ixelles - no easy task as it's not in the centre, But we persevered because we were keen to see a special exhibition - 'Belgian Landscape'. Now, if you've ever driven to Brussels from Calais or Dunkerque, you may well have noticed that this particular bit of Belgian landscape is not especially varied. It's flat and it's green and there some nice trees, and that's about it. So we were interested to find out more about Belgium's other landscapes. Well, this didn't really happen, but we did see this nice picture of sand dunes, by Anna Boch - and some very lovely other paintings in the general collection, which has art from the 19th century up to the present. 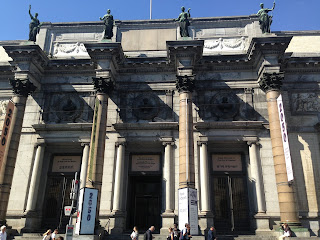 Much easier to find is the Musee des Beaux Arts. It's just round the corner from the royal palace, on top of a hill, looking down on the lower city where the poorer people used to live. This is a wonderful museum/art gallery, with a very good shop and a pleasant cafe. The only unfortunate thing about it is that you have to choose which section to buy a ticket for; you can't wonder at will. We went for the Old Masters, because we wanted to see the Breughels... 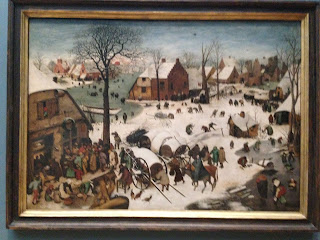 ... which, of course, were marvellous. A lot of the other Old Masters featured crucifixions, women with their eyes raised piously to heaven, and dead birds - but I always like the earlier pictures. Here's a detail from one such: 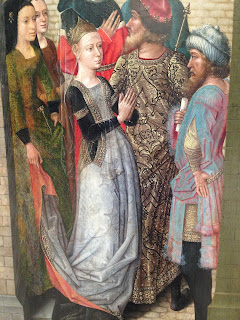 I've always loved the look of medieval gowns, and I thought this one was exquisite. (Unfortunately the security was draconian; they wouldn't let me take my handbag, which meant that I didn't have my notebook and so couldn't take note of the painter or the subject. She was a saint - that's all I can tell you: a very elegant one. Humble apologies for such lackadaisical scholarship.) 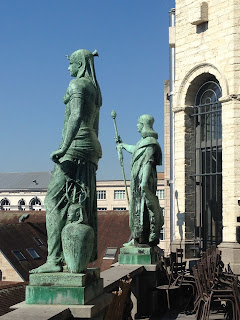 After the Old Masters, we had lunch in the museum cafe. We sat outside, looking over the rooftops, guarded by these splendid fellows as we ate delicious cheese with some sort of 'sirop' and grapes. 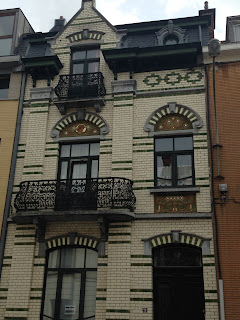 Another thing Brussels is known for is its Art Deco architecture. This is all over the place; you just have to look up, and the chances are that you will see a decorated panel or a balcony made of sinuously curved wrought iron. 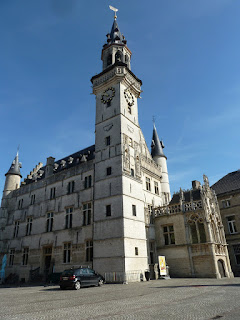 The chief splendour of Belgium lies not in its landscape, but in its cities. Ghent, Antwerp, Leuven, Bruges; they're all beautiful. This is Aalst. I once sat beside a girl from there on the Eurostar, and she told me that she thought her city was just as lovely as these more famous ones. I've wanted to go and see it ever since, and last week we did. It's small, but it certainly has a lovely square, with this old belfry and cafes in front of the tall houses whose gables are decorated with curlicues. Why is it, I wonder, that all over Europe, cities both in the north and the south have these squares where people sit outside, drink coffee or sip wine and watch the world go by - but Britain does not?

Brussels is not as picturesque as these better preserved old cities. But it's vibrant and often unexpected - and of course, there's the chocolate. And the waffles... and the ice cream... and lots of art.
Posted by Sue Purkiss at 02:00

Email ThisBlogThis!Share to TwitterShare to FacebookShare to Pinterest
Labels: Brussels

Why doesn't Britain have squares where people sit outside? - Sue, have you noticed the weather over the past few days?
Lovely post, about a country I know almost nothing about. You've educated me!

Ah, but Belgium has weather at least as bad as ours. It was gorgeous the day we were in Aalst, and so was the next day - but that was two days out of a fortnight; every other day it rained.

I lived in Brussels for 8 years and in the suburbs (Waterloo) for another 8 years. It's a fascinating, complex country with a global outlook and a diverse, multilingual population. Not to mention great food (forget the chocolate and fries, go check out tomates farcies aux crevettes grises--OK, avec frites, but they are not the main point of the dish).

And the history...I'm surprised more writers don't base their fiction in a country that's been invaded and fought over as often as Belgium has.

And next time I'm there I'll look out for the stuffed tomatoes!

Fascinating - and how useful to have family in such an interesting city!

You forgot Jacque Brel and Georges Simenon, Sue! Two of the country's most renowned exports.

Belgium, as you say, has a BD (bande dessinée - drawn strips) culture second to none.

The youth of both France and Belgium are brought up on such 'comics'. It was not an art form I was interested in until I moved to France - in fact, to be honest I was a little dismissive of it, but it is rich and magnificent. Still, I had no idea there was a festival in Brussels dedicated to Herge/Tintin etc, although I am not at all surprised and would love to attend it one day

PS: they have stolen the stuffed tomatoes recipe. I am fairly sure it hails from south of France! x

I've been to the south of France many times and never come across the dish--where did you have it? The Belgians make it with crevettes grises, tiny little shrimp that have more taste than any other variety.

The other thing I miss from Belgium is game season. Boar pâté, filet of Bambi... And being able to get foie gras with port aspic at New Year's. In Belgium you're never far away from a good meal.