I fell in love with when I was nine years old.

My mother and I had arrived in to spend some months with the English half of my family, and my uncle was driving us north to the . I think I probably fell asleep, but when he stopped to let us stretch our legs for a while in the dark, I stepped out of the car into a wide, tree-lined street – no, it was more than a street, a long triangle, disappearing into the distance. Under a sky of moon and stars, strange buildings stood out, crenellated, turreted, like something from a medieval tale. Then from all over the town, bells began to ring.

It was . St Giles. And it was midnight.

What an introduction! Later, when I was lucky enough to go there as a student, the love deepened. Of course, there were all the usual things – wonderful friends, punting on the river, picnicking while watching cricket in the Parks, parties, singing in the Bach Choir, acting, glamorous balls. And incidentally, falling in love and marrying. Well, yes, there were lectures and tutorials to be squeezed in as well.

Underneath it all, however, that first impression remained strong, and grew even stronger whenever I thought of all those who had inhabited the same streets through the centuries. I remember one particular occasion when I was walking alone down tiny in winter. Deep snow lay under foot. There was a single lamppost. In my memory it was one of the old gas ones, can that be right? One bar of gold light fell across the snow, and, in Merton chapel, someone was playing the organ. There wasn’t another soul to be seen. Yet I could feel all those people around me, especially those early scholars from the Middle Ages.

I’ve never believed in physical time travel, but there are certain spots in our lives when we make that emotional leap, and that was one of them for me. I wouldn’t claim I could see those medieval scholars, but I could certainly feel them.

It was inevitable, I suppose, that sooner or later I would have to write about medieval , and that is what I have been doing in recent months. However, I always love the research as well, and in this case it has been fascinating. First of all, my central character is a former student, now a bookseller, so I needed to know everything about book selling in the fourteenth century, parchment making, bookbinding. I made some curious discoveries.

It would be another century before the invention of printing replaced the handwritten book, but nevertheless booksellers did exist and in university towns they could be licensed to provide the peciae, sixteen-page extracts from essential texts. Students would hire and copy these, in order to have their own versions of the study texts, and the system provided booksellers (who were also stationers) with a regular income. The rental rates were controlled by the university. This was a wonderful and totally unexpected discovery. So that was how students acquired their textbooks in the fourteenth century!

Although the most luxurious decorated books were expensive, there was a brisk trade in secondhand books. Moreover, certain books were popular amongst the literate laity, such as books of hours and collections of traditional tales. This book ownership was more widespread than I had realised. There is even a recorded case of a vagrant stealing a book of hours belonging to a servant.

By this period paper had come into use, though parchment was the material of choice for the pages of books. Its production was demanding, but the liberal supply of flowing water all round was ideal for the purpose. And – glory be! – I discovered that out beyond the castle there was a !

The university system had not yet taken on its later form, so that in 1353 (when my first story is set) undergraduate students were not admitted to the colleges. They lived in ‘halls’, or sometimes in town lodgings, and would only join a college if they proceeded to advanced study after completing the Trivium and Quadrivium. A hall was run by a Warden or Master, and there was a whole cluster of them in the northeast part of the walled town. Only one of these survives to this day, St Edmund Hall. Although in recent years it has become a full-blown college, it still proudly retains its title of ‘Hall’.

However, the constant murderous fights between town and gown are well known. One of the earliest led to the flight of a group of scholars to the fens of Cambridgeshire to found Britain’s second university, but these bloody encounters continued into the fourteenth century with probably the worst occurring on St Scholastica’s Day in 1355, when there were so many deaths and injuries that the town (which had thought itself victorious) was severely penalised by the king. The fight started at the Swindlestock Tavern on Carfax, the central crossroads in . When I was a student, my bank stood on the spot (though it’s a different bank now).

All this trouble meant that the university decided that students needed to be better regulated and cared for. Merton began admitting undergraduates to college around the 1380s and other colleges followed suit, although official university halls continued to accommodate students as well.

The street plan of the walled town of has remained remarkably unchanged. Originally a fortified Saxon town, it was built around the crossroads of four streets: the High Street from the East Gate, Northgate Street from the North Gate, Fish Street from the South Gate, and Great Bailey (a post-Conquest name) originally from the West Gate, which was knocked down to make way for the Norman castle and replaced by a much smaller gate. All four streets met – and still meet – at Carfax.

Three of these streets have changed their names. Fish Street is now St Aldate’s, Great Bailey is , and Northgate has become the Cornmarket. The Guildhall was located in Fish Street, where the Town Hall now stands.

One of the best-known streets in today is the Broad, lined with magnificent buildings. I found it entertaining to discover that it lies over or at least near the old stinking Canditch, which surrounded part of the town, lying outside the town wall. There are still bits of the wall to be found, if you search. For my fourteenth century inhabitants, it formed the boundary of the town proper, although already the town was beginning to spread beyond the wall.

Of course, the period I have chosen is immediately after the Black Death, known at the time as the Great Pestilence, or simply the Death, when anything from a third to half the population perished. The university was hit hard, but it survived. More than that, it took advantage of tumbling values to acquire large amounts of property in the town. After the Death, the warren of small cottages to the north of St-Peter-in-the-East had become more and more squalid, inhabited by criminals and the worst sort of prostitutes. It was recognised as a place of danger and disease, and the neighbours heaved a sigh of relief when it was cleared away to make room for in 1379.

From St Edmund Hall on High Street in the south, to Hart Hall, near the junction of with the wall at the small Smith Gate in the north, ran a winding lane known at , after one of the many halls in the area. Nowadays the northern part in known as , the southern part as Queen’s Lane.

Only a handful of colleges existed at the time, and not all are still extant. The survivors include Merton, Queen’s, Oriel, University, , and Balliol. became , was replaced by , much of was taken over by and Trinity. and were Benedictine foundations. Hart Hall has become (my husband’s college – the one with the bridge). You will not find the , next to the bridge over the Cherwell. It has vanished under .

Originally, of course, the university was established to train men in holy orders, although the growth of a secular ‘civil service’ required by the king and the law courts created a demand for more and more educated men outside the church. As well as the colleges, Oxford was surrounded by ecclesiastical institutions: the Augustinian Friary, the Carmelite Friary, the Franciscan Friary, the Dominican Friary, St Frideswide’s Priory, Rewley Abbey, Osney Abbey, and a little way north of the town, Godstow Abbey (a nunnery), where Henry II’s mistress, Fair Rosamund, was buried. All came to an end with the Dissolution, but in the fourteenth century they were still flourishing.

Even now the maze of waterways formed by the many branches of the and the Cherwell encompasses the town, and the water meadows, now as then, are at risk of flooding. All this water provided the driving power for at least five mills: Holywell, Blackfriars, Castle, and Trill, and across the water meadows to the east, King’s Mill.

A curious personal note. I wanted to use Holywell Mill in this first book. Something nagged at the back of my mind, but I couldn’t pin it down. I looked up a picture of the present Holywell Mill, built in 1888, architecturally in seventeenth-century style (no longer a working mill). The picture hit me like a thunderclap. As a first year student I cycled there once a week for a tutorial. My unpleasant fourteenth-century character, Miller Wooton, I’m glad to say, no longer lives there. 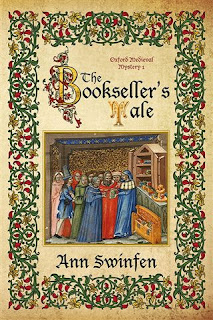 I've been to Oxford twice, only for a couple of hours at a time. Beautiful place, from what I did see. The first time a friend took me to see the Eagle and Child pub because of its Inklings connections. The second time I was on my own and just plunged into the streets to see what I could see - among other things, I found Christ Church college, where Alice Liddell's father was in charge and the Alice Old Sheep Shop, an Alice In Wonderland souvenir shop which started life as the shop Tenniel drew in Through The Looking Glass. The place is full of history, isn't it?

The way the students got their textbooks reminds me of the way I got mine when I was studying librarianship. The textbooks for that course were so expensive nobody could afford them, so we borrowed them for two hours at a time and copied the bits we needed. Fortunately for us, there were photocopiers to do the job. ;-)