This is the wonderful cover of a novel which I read as a plain black and white proof.  I was enchanted from the first page, carried away by a rich confection of many different elements. It's a historical novel. It has a fantastical/mythical strand.  It's about developments in medicine and social conditions in the 1890s. It unrolls a landscape before our eyes. Above all, it's about love: different kinds of love but most especially that between Cora, the heroine and  William, a married vicar of an Essex parish, father to children and husband to a woman suffering from tuberculosis.

I recently sent a few questions to Sarah Perry and she very kindly agreed to  answer them, so here is  what  the writer herself has to say. I'll add a few words  at the end of her remarks about my experience of the novel.

ME: Can you remember your first inkling/tingling feeling/vision  before you started to write the book or began researching it? What was the (hate to say inspiration) little seed of the idea that impelled you?

SARAH: I can remember very clearly, which I suspect is quite rare! About 4 or 5 years ago I was in the car with my husband driving through Essex, and we passed a sign to the village of Henham-on-the-Mount. He asked if I knew about the Essex Serpent – and I didn’t! He’d been reading an old 1930s book called Companion Into Essex, which had a chapter devoted to the Serpent and various sightings of mysterious beasts in the county. It immediately set off my imagination – I remember planning – out loud! – the novel, and by time we got home I already had most of the characters in mind.

ME: Can you tell us a bit about your process? Did you do all the reading before you started writing or as you went along? Are you a diligent writer or a lazy one? Are you fast or slow? Do you edit as you go? At the end? Do you plan out everything very carefully?

SARAH: I do have a process of a kind though I don’t think it’s a very good one. After I had that initial idea I did absolutely nothing – no notes, no planning – for a good couple of years. But the whole time I was thinking and pondering, and letting the characters develop, and reading here and there in books about surgery and the history of Colchester. Then, when I felt that it was about to burst, so to speak, I sat down in February 2014 and began to write. I got up again nine months later with a first draft.

I do plan – but in my head, largely. I am not one of those writers who has lots of wonderful notebooks and handwritten drafts. Once or twice I had a stab at a plan on sheets of paper – but then I just never looked at them again. I think I leave it to my mind to sift and sort – and although I’m sure I forget lots of things. I always think that if something is worth making it into the novel, I will remember it! However, I did draw a little map of the village of Aldwinter and posted it over my desk.

I tend not to do too much editing of the draft as I go – that would be horribly dispiriting. Instead I get to the end and then print it out, and read through, and make marks on the manuscript.

However, this time I was working to a deadline as my marvellous agent was going on maternity leave and I wanted her to see it before she went – so I didn’t do much editing of that first draft until it was in the hands of my editor.

So I suppose I am both lazy and diligent! It is very typical of my writing and indeed my character to do very little for a long time, and then to work with grim determination for many hours every day, neglecting myself and my family and friends in the process, until it’s done.

ME: Do you have someone who is with you from the beginning and shares the work or do you hide it till it's done? Are you good at taking editorial or other advice?

SARAH: I occasionally discuss a line or a paragraph with my husband – or I might read him a section I am concerned about – but generally I kept it entirely to myself until my agent saw it, and intend to do the same with my current novel in progress. I think (though I suspect I am not the best person to ask!) that I am good at taking editorial advice, for two reasons: firstly, an MA and PhD taught me many a hard lesson in humility, and secondly, I trust both my agent and my editor implicitly. I think of their editorial skills as being essentially sorcery: with both books they have this uncanny knack of knowing precisely what I am trying to achieve, and how to help me achieve it. More than once, there has been a little scene, or a sentence, which in my heart of hearts I have know full well doesn’t work, but have tried to slip past them.  Unfailingly, they spot it!

ME:  I think of the book as a many- stranded plait. What pulls readers through it and unites all the strands, so to speak is the Serpent. We do want to know what/if/how it is. How important is the element of mystery and discovery in the book?

SARAH: Vitally important, I think. All my life I have been a devotee of detective fiction, and I think it has trained me in the importance of some degree of mystery in every book – something to keep the reader turning the pages. And I think most very great fiction is, in some way, a whodunit, or a whydunit, or a willtheydoit! In Great Expectations we want to know who Pip’s benefactor is, in Crime and Punishment we want to know if Raskolnikov will get away with it, and so on. I don’t think there necessarily has to be a very definite answer  - but ideally there will be a solution, and it will not be one the reader could have predicted – but once revealed, will make absolute sense, the novel having been read! I don’t think I have successfully pulled this off yet but it’s something I hope to achieve one day: a good mystery, with a totally satisfactory ending.

ME: Do you read any contemporary novelists? And if so, who do you admire?

SARAH: Speaking of mysteries and endings: one of my favourite contemporary novelists is Sophie Hannah. Her mysteries are masterpieces of corkscrew thinking: I read them with my mouth open in awe. I’ve spoken to her a couple of times about writing and one of the marvelous things is that you realise she is an expert in the craft, really understanding it in the way a great pianist understands musical theory. The great love of my life is Hilary Mantel – I realise this seems an obvious response, but (as I am fond of telling everyone at the drop of a hat) she has been my idol since long before Wolf Hall. I stand in awe of her intellect, her wit, her bravery in her writing, the majesty and beauty of her prose, and her great kindness. I long to meet her but absolutely cannot, as I would probably just burst into tears. Until recently there were two novelists whose books I’d buy in hardback the day of release: Mantel, and Terry Pratchett. I wept so hard when I heard he’d died that my husband heard it from downstairs and came running up to see what the matter was. AS Byatt once called him ‘The Dickens of the twentieth century” and I absolutely agree: he was a master storyteller, and had a wit like a razorblade, but was also fundamentally kind and compassionate - that's rare to come by, I think.

We start with  a short, mysterious prologue in which we almost meet the eponymous Serpent. We are intrigued and spooked,  but on the first page, in the first sentence, Perry gives a nod to Dickens: "One o'clock on  a dreary day and the time ball dropped at Greenwich Observatory."  We are once more in the real world.
The back cover of the novel lists the things you will find within it and I'm reproducing it because it sums up very well what readers will discover and enjoy. 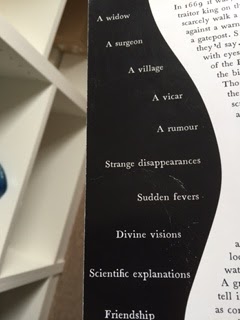 What this list can't tell you is how well Perry writes. She has found a language which is both plain and rich. Her descriptions of landscape bring the places she's describing to life in a way that takes you right into them.

'The drizzle subsided and cleared the air, and without any sunlight breaking through the low white canopy the air flushed with colour. Everywhere reddish banks of last year's bracken glowed and above them gorse thickets burned with early blooms of yellow. "

Every character is so well described that you'd recognise them if they walked into the room. The love relationships are drawn with great sensitivity. We learn much about medical advances through the fascinating character of Dr Luke Garrett and about housing problems in London in the relationship between Martha, Cora's companion and maid and Luke's friend, Charles. Stella, the vicar's wife, is a very  unusual character who becomes more and more unhinged as the novel processes, partly because of the tuberculosis which ravages her body but maybe also partly because of something else... divine possession?

And the Serpent? What's all that about? I am not going to tell you, but what  I will say is: the ending is most satisfactory. I can't give away important surprises that occur on the way to that conclusion, but there are losses and recoveries, visions and dreams,  arguments and debates. And everywhere love which is both destructive and creative, but in all events, unforeseeable.

I reckon this book will be on many prize shortlists this coming year and if not, I will be very  put out. I loved it.

If it's anything like all as good as the passage you quote then it's a must-read. Thanks very much for the recommendation.

Well, I've GOT to read that now! Thank you.

Great, I like your method to review the essex serpent by Sarah Perry. Thank you