Spells, Pills & Plasters to Help a Lady Get Her Man – Michelle Lovric

BAIT, n. A preparation that renders the hook more palatable.

The best kind is beauty. 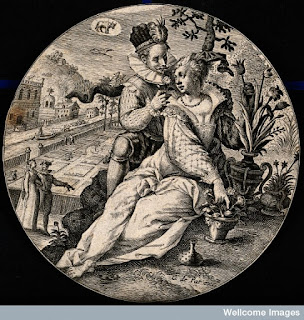 Binding spells were probably the first bait deployed when beauty alone failed to attract the desired mate. In Renaissance Italy, binding spells could be cast, for a fee, by ‘wise women’ or undertaken by ordinary women with the right information.

For example, a woman who wanted to be sure of her man would burn the tips of olive branches and dip them in holy water, chanting: 'As I bind this wood with this cord, so may the phallus of my lover be bound to me.' Then she would take the branches to the garden outside the church and plant them in the ground, chanting: 'As this wood cannot grow green again, so may not the phallus of my lover be inclined to relations with any other woman.'

Women who required the undying fidelity of their men were advised to rub their entire bodies with holy oil before sexual congress with them. This formula had the added advantage of leaving the woman free and unbound; while her husband might not stray, she was able to engage her body and her feelings wherever she wished.

Another love-recipe involved the use of large sage leaves: the woman would write on them and give them to the object of her love, who, on eating them, would be overwhelmed with passion.

The lips of would-be lovers would be anointed with holy oil, and they had to make sure they stayed slick and slippery until the very moment of stealing a kiss from the person they longed to possess.

There were always ways to renew a man's lust for his wife. She had to place under the conjugal bed the blade of a plough, and the hoe and shovel used for burying at least one corpse. In another spell the wedding ring of a young virgin who had subsequently died was required: the affected man had to urinate through this ring and would soon find his powers miraculously restored.

Some notions of this kind were kept in manuals or even published. Illustrated below is a receipt (recipe) for a person to make her husband love her, from A Booke of Physicke, circa 1710. 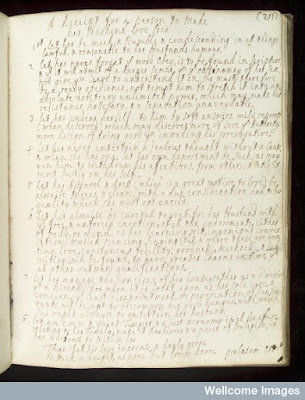 Vendors of quack love potions put on wonderful shows of intimate expertise at markets and country fairs, as you can see in this coloured lithograph by C. Voct after A. de Valentini. It shows Lablache, a flamboyant itinerant medicine vendor selling Mariol an aphrodisiac at a country fair. (Courtesy of Wellcome Images). 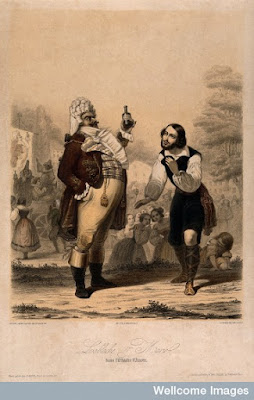 The marketing of sexual attraction really began in earnest with the age of printed advertising. Almost any product could be sold with the promise - or, even better, the hint - that it would bring the opposite sex flocking, panting and salivating.

Lady quacks in London often specialized in beauty treatments that mined women’s insecurities about retaining the exclusive attention of their husbands. A ‘gentlewoman’ practising at the Haymarket could furnish her own proprietary nostrum at just a shilling a bottle, asserting: ‘God the author of all things, to make man in love with his wife in her state of innocency, he made her smooth, soft, delicate and fair to intice him; I therefore, that woman may be pleasing to their husbands, and that they might not be offended at their deformities and turn to others, do commend unto you the Virtue of an eminent and highly approved “Balsamick Essence”, with several other Incomparable Cosmeticks …’.

Salves, pills and creams constituted the main tools of the trade, but other less likely inventions were also aimed at would-be lovers. One of my favourites in this department are the Oxien Active Sex Plasters, which promised post-coital glow, without the bother and mess of coitus.

The advertising pitch was this: ‘You may have heard of the woman who felt so nice she thought it was caused by walking on velvet. Oxien Sex Plasters make any one, man or woman, feel just too good and happy for anything …When one of these plasters is placed on the warm body, the nap to this downy-feeling fabric seems to generate that warmth of food nature that comes from the satisfied nerves when content reigns supreme.’

Oxien Active Sex Plasters were, according to the manufacturers, ‘delicate and soft as a kitten’s ear … not only soul-satisfying, but they are large and well-shaped.’

No wonder Oxien could warn, ‘You cannot afford to do without.’

Some love-pills were advertised with romantic imagery. Shedd’s Little Mandrake Pills, for example, used an image of a courting couple and a series of (terrible) jokes on the back of the trade cards as their pitch. An example:

USE SHEDD’S LITTLE MANDRAKE PILLS
If cats howl in the back yard it is a sign that you do not love mewsick.

Some quacks set themselves up as experts in fulfilling the romantic dreams of their women clients. Typical were the claims advertised in an 1880s poster for a ‘Professor Franklin, M.D’. The doctor described himself as an ‘Eminent Lecturer, intuitive veteran Physician of Body and Mind’ and mentioned some of his previous publications, ‘The Medical Counsellor’, ‘Art of Health and Beauty’, ‘Phreno-Medical Chart’, ‘Compass Tree and Book of Life’, ‘Science of Life and Mind’, ‘Oracles of Truth for Every Youth’.

His poster gave notice of a lecture ‘FOR LADIES ONLY. Subject: HEALTH and BEAUTY, WOMEN’S SPHERE and DUTY. Her gifts, qualities and capabilities, Signs and causes of Passions, Character and Diseases; the best means of prevention and cure, without drugs.’
The good doctor warned: ‘No lady should miss these best efforts of Franklin to please and instruct the fair. His extensive travel, great experiences, pre-eminent abilities have wonderfully fitted him for his work…’.

He concluded, ‘Every lady can learn how to perfect her form and features, mould the heart, rule in the domain of Love and make judicious rejections of friends and husband by the light of science. Every lady can treat herself without exposing her condition.’

Have things really changed so much? How much advertising uses the promise of sexual or romantic success, even between the lines? Next time you watch an advertisement on television, or see one in a magazine, can I suggest you ask yourself how often sex is dragged into the equation. And how often sexual insecurity is used as a hook for a purchase that is nothing to do with physical intimacy.

The image at the top of the page, courting couple sit by a tree and the man hands a flower to the woman. Engraving by C. de Pas, courtesy of Wellcome Images
Posted by michelle lovric at 00:00

"Oxien Active Sex Plasters - soft as a kitten's ear" - I'd like a crate full, please!

Wonderful! Nowadays, of course, we'd be getting junk emails about these preparations..

I want to thank Dr.Agbazara for his job in my family, this is man who left me and the kids for another woman without any good reasons, i was pain and confuse,till one day when i was browsing through the internet with my computer then i saw Dr.Agbazara contact, then i contaced him and he help me cast a reunion spell, since I then the situation has changed, everything is moving well, my husband who left me is now back to his family. reach DR.AGBAZARA TEMPLE via email if you have any relationship problem at: