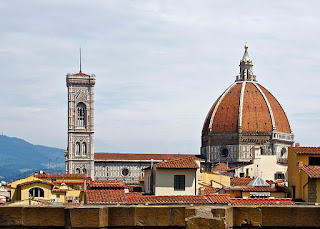 Every now and again in a writer’s life there comes an experience that you have just exactly because you are a writer. You are doing your research and you stumble across something you didn’t know or someone tells you something unexpected. And this might lead to something amazing.

I’ve been lucky enough to have many of these, most of them in Italy, the land of my heart, but this post is specifically about two connected to Michelangelo.

The first happened in my first “Long Vacation” which is what they call the summer holidays at the University of Cambridge. It was a very long vacation indeed and my boyfriend had gone to India. I, on the other hand, had been given a bursary to spend a month in Florence, learning the language ay the British Institute.

Only in the mornings; the rest of the day was my own. It was not my first visit to Italy but it was my first to Florence. I arrived by train. My father was a railwayman and I never went anywhere you couldn’t get to by train.

I was staying in a pensione overlooking Piazza San Lorenzo, where there were three other students. The two men were also from Cambridge, a medical student and another reading English like me. Of the two women, one was reading English at Bristol and the other was an American of German origin on what we would now call a gap year.


None of us was an art student and yet we all became passionate about art in that month, spending every afternoon exploring museums and galleries with our sketchbooks and meeting up for a cheap dinner every evening to share our discoveries.

One afternoon all five of us showed up at the Casa Buonarroti with our sketchbooks and 2B pencils but, alas, it was closed for renovation. “But we love Michelangelo!” we said. “And we are students here for only a short time.” We never actually claimed to be art students but our long faces did the trick and we were let in.

We saw Michelangelo’s two early marble relief panels: first The Madonna of the Stairs with the BVM represented as a strong peasant woman, who has just finished feeding her child. If she stood up, she would be a giantess. Then the Battle of Centaurs and Lapiths in which the artist discovered what would be his main theme for the rest of his life: depicting the athletic forms of naked young men.
The third object I remember was a painted wooden crucifix with an almost childlike Christ, the whole thing about three-quarters life size. At that time there was a dispute about whether it really was an authentic Michelangelo early work. We were all very moved by it and quite convinced that it was.

The experts later agreed and it was returned to the church of Santo Spirito, Oltr’arno, where it had originally hung as a thank you from Michelangelo to the Prior Bichiellini, who had let him dissect unclaimed corpses that had been brought there from the hospital.

Scroll forward many decades and I am again in Florence in April of this year after more visits than I can count – more than thirty at least. This time I am a woman on a mission. I have been writing the story, In the Footsteps of Giants, that forms the basis of the app being developed for Time Traveler Tours & Tales and I am there with Sarah Towle, the American publisher and writer who set the company up.

We are developing an app to be used on IOS and Android phones in the city so that families with older children can take a tour of Florence, using Michelangelo as their Renaissance guide.


A little bit of history: Michelangelo was born into a Florentine family, the second of five boys, and as a young teenager was taken under the wing of the great patron of the arts, Lorenzo de’ Medici. He was brought up with Lorenzo’s sons and nephew, two of whom later became Pope, but after Lorenzo died, Michelangelo had a fraught relationship with the family.

There were times when he worked for the Republic which had expelled the Medici and times when he took artistic commissions from members of the Medici family. As an adult he lived more in Rome than in Florence, thought the city of his adolescence and young manhood still contains some of his greatest works of art.

In 1527 he was appointed to oversee the fortifications of his home city, which was about the come under siege …from the Medici! So when the members of that family, in collaboration with the Imperial Army, attacked Florence so hard that the city surrendered in the summer of 1530, Michelangelo was a wanted man.


He went into hiding, in a place he knew well – San Lorenzo church. He had been building a chapel there to house the tombs of his old patron, Lorenzo de’ Medici and his murdered brother Giuliano, and two lesser Medici dukes who confusingly had the same forenames. These tombs were to be housed in a New Sacristy, designed to balance the Old Sacristy, which had been built earlier by one of Michelangelo’s heroes – Filippo Brunelleschi.

Brunelleschi was the gifted engineer and architect who had worked out how to fit a dome on Florence’s great cathedral and he had designed the whole church of San Lorenzo which was the family church of the Medici.

What Michelangelo knew and the Imperial forces didn’t was that there was a secret chamber under the New Sacristy. His friend Prior Figiovanni sneaked him in there and there he stayed in hiding from August till October.

And while he was there he drew on the walls with charcoal. 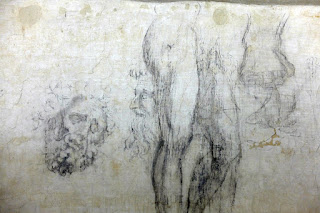 The room wasn’t found again until 1976, ten years after the great flood that damaged so much art in Florence in 1966. Obviously a lot more important spaces had priority for restoration over the room under the New Sacristy, which had been used for years to store coal. It was only when the walls were being cleaned up that the charcoal drawings began to emerge.

Here was the clue to where Michelangelo had been hiding in those missing weeks as summer turned into autumn in 1530. He had whitewashed the walls to cover up his drawings, we assume that he didn’t want to get Prior Figiovanni to get into trouble for showing him the hiding place.

The tour of Florence app, In the Footsteps of Giants, was loosely inspired by my novel David (Bloomsbury 2011, Greystones Press revised edition 2016) in which I imagined who the model might have been who posed for Michelangelo’s most most famous statue.

And the story of sculpting the Giant, as he was known in the earlier years of the sixteenth century in Florence, is still there in the app. But we decided to make the sculptor himself the narrator of the story, as he hid under San Lorenzo, sketching a kind of spiritual diary on the walls, looking both backwards and forwards.

So it was really important for Sarah and me to get into that secret underground chamber. The only trouble was it is not open to the public.

Without revealing any names or details, I will only say that Sarah is a very determined woman! The result was that we did in fact spend a full hour in that chilly underground room where one of our heroes had hidden in fear of his life nearly five hundred years ago. It was an unforgettable experience.

We took lots of photographs, which I can’t show you yet, because of copyright negotiations. But if you put “stanza segreta San Lorenzo” into your search engine, you will find plenty of images to give you an idea of what an overwhelming experience it was.

There is a well in one corner though the water would not have been any more drinkable than any other in Florence in 1530. You could probably have washed with it but I doubt Michelangelo bothered. One of things we know about him is that he washed rarely, didn’t change his clothes for ages and slept in his boots.

Much more interesting are the drawings on the walls, including sketches for the monument to the younger Giuliano de’ Medici, Duke of Nemours. You can tell it’s for that statue by the knees. 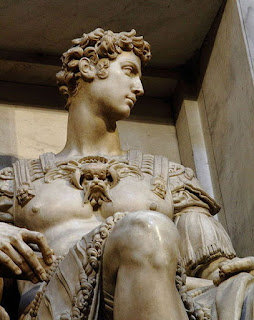 The funerary monuments in the New Sacristy were never completed, as Michelangelo was summoned back to Rome to work on the Last Judgment fresco in the Vatican. But he was pardoned by the Medici and his salary unfrozen, on condition he continued with the chapel. We don’t know for sure why he never returned to complete the plan.

What is certain is that visitors admired its extraordinary architecture and great sculptures for nearly four and a half centuries without knowing about that secret room under their feet, where the great man hid, not knowing if he’d ever be free to work on his art again.

(You can buy David: the Unauthorised Autobiography on this Amazon link (other booksellers are available)) 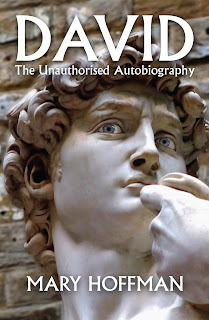 And you can pre-order the story app here.
Posted by Mary Hoffman at 00:01

Amazing that the drawings were found after all those years - and that you had the chance to see them!

What a privilege to see those underground drawings. Imagine being buried down there, scribbling on the walls... Wonderful, Mary, thank you.

I concur! It was a truly unforgettable experience being in Michelangelo's hiding place, and being there with you, Mary. Our coming storyapp, In the Footsteps of Giants, is now all the better because of it!

That sounds amazing! I can't wait for the app. Not that we needed another excuse to go back to Italy.