BEATRIX POTTER and the SAILING SQUIRRELS by Penny Dolan. 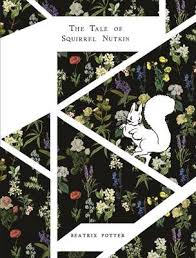 There are a large number of characters in the manuscript I’m working on and I tend to differentiate them by giving each a certain quality, a shorthand for me while I’m working on the novel and eventually, and  by then more subtly, for the eleven year old reader. One character is, to me, rather squirrel-like: gingery hair, energetic, always alert for the one thing that matters to him, easily distracted by the new – and so on and so on – and all of which set today’s topic jangling in my mind: squirrels or, more particularly, The Tale of Squirrel Nutkin. And his new book cover.
This July, 150 years after Beatrix Potter's birth, Puffin Books are publishing five of the most popular books with re-designed covers, although I think that Puffin have retained the original illustrations inside. What? Immediately I was huffing and puffing because I usually dislike tampering with original illustrations. (Surely the delicacy of Sheppard’s work compared with that dreadful Disney Eeyore will prove my case?) 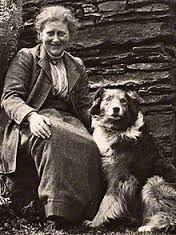 Born in London, Potter’s drawings celebrate the rural - the people, the animals and places she saw on holidays in Scotland and in the Lakes - and I feel the pictures are so much a part of the whole experience of those books.
There is something Victorian in the quality of her observation, such a controlled passion for natural history. Her careful water-colours seem the female art form of the time, requiring no expansive canvasses, taking up not too much space, the skill entirely suitable for well-bred young ladies.

Yet there is something quietly subversive about her work too. While one admires Potter’s art, knowledge and humour, there is no doubt that her delightfully marketable creatures live in a world that turns cruel in a trice. Death is ever present, whether from Mr McGregor to a cat sleeping casually in the background. 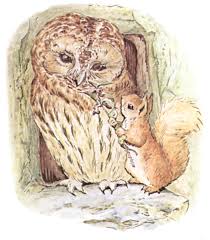 Besides, those various garments – from Peter Rabbit’s famous blue coat to Mrs Tiggy-Winkle bustling around in her full finery –  always carry a hint of those popular if dreadful glass-cased stuffed-kitten tableaux that can still found in “museums” such as Blackgang Chine on the Isle of Wight. Curious images, indeed.

Potter went to the London Zoological Gardens to find a live model for the character of Old Brown, the owl, and she tried working from live red squirrel specimens for Squirrel Nutkin himself, complaining that:
“I bought two but they weren’t a pair and fought so frightfully that I had to get rid of the handsome and most savage one. The other squirrel is rather a nice little animal but half of one ear has been bitten off, which spoils his appearance.” 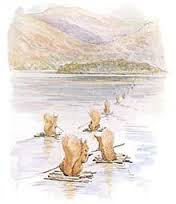 “The Tale of Squirrel Nutkin” has a real setting too. “Owl Island,” where Nutkin so naughtily tempts fate, is St Hubert’s Island on Derwentwater, which leads me on to one very memorable image. Potter’s picture of the flotilla of squirrels, going across the water to gather nuts.

Potter’s perspective seems to be take you across the gently bobbing water all the way to the forbidden wood but I’ve never seen that image without, for a moment, wondering about the truth of that journey.

Where did this “flotilla of squirrels ” idea come from? 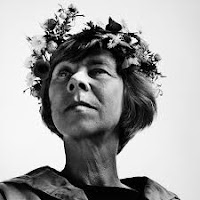 Then one night, quite recently, and agitated about matters much more important than those uppity art-work covers – and who isn’t at the moment, to be frank?  – I began reading two books by Tove Jansson, best known her Moomin books.

My three a.m. titles were both for adults, one is more of a memoir and one a collection of short stories. The first, A Summer Book, is all about a grandmother and granddaughter, spending summers on a small island off the Finnish coast. Their relationship changes as one summer follows another.

The second set, A Winter Book, is about an old woman living alone and independently on that tiny island.

Together, these two short books give a simple but thoughtful glimpse into the life of a proudly independent artist.

However, as I began the short story called The Squirrel, Jansson’s words sprang out at me:

“One winter day in November, near sunrise, she saw a squirrel at the landing place. It was sitting motionless near the water, scarcely visible in the half-light, and she knew it was a real squirrel and she hadn’t seem a living thing for a long time. You can’t count gulls: they’re always leaving, they’re like the wind over waves and grass.

She tried to remember everything she knew about squirrels. The wind carries them on pieces of wood from island to island. And then the wind drops, she thought with a touch of cruelty. . .
Why do squirrels go sailing? Are they curious or just hungry? Are they brave? No. Just ordinary and stupid. . . .It was possible the squirrel might stay overnight. It was possible the squirrel might stay the whole winter.”
The squirrel cannot do nothing but stay, making its home in her woodpile. The whole story revolves around the relationship between the wild squirrel and the elderly islander, revealing how physically demanding her solitary island life is becoming. Then, towards the end of the story, she goes down to the jetty and finds:
“The squirrel had gone – there was no doubt there had been seven pieces of board, not six, all the exactly the same distance from the water: sixty five centimetres.”
The story concludes with a further twist that I won’t reveal.

However, with my head already busy with young Nutkin’s flotilla, I felt that Jansson’s sailing squirrel seemed a remarkably serendipitous coincidence. I went searching and came back with other instances.
Back in 1774, in his “History of Animated Nature”, Oliver Goldsmith reported
“Nothing can be more true than that Lapland squirrels, when they meet lakes or rivers, cross them in an extraordinary fashion.
Perceiving the breadth of the water, they return, as if by common consent, into the neighbouring forest, each in quest of a piece of bark, which answers all the purposes of boats for wafting them over. When the whole company are fitted in this manner, they boldly commit their little fleet to the waves ; every squirrel sitting on its own piece of bark, and fanning the air with its tail, to drive the vessel to its desired port. In this orderly manner they set forward, and often cross lakes several miles broad.
But that is not all. It may be rough in the middle of the lake, and the result then is lamentable. There the slightest additional gust of wind oversets the little sailor and his vessel together. The whole navy, that, but a few minutes before, rode proudly and securely along, is now overturned, and a shipwreck of two or three thousand sail ensues. This, which is so unfortunate for the little animal, is generally the most lucky accident in the world for the Laplander on the shore; who gathers up the dead bodies as they are thrown in by the waves, eats the flesh, and sells the skins for about a shilling the dozen."
All of which is an even sadder squirrel fate than escaping from Old Brown without your fine, feathery tail.

However, I couldn’t help noticing that all these squirrel tales seem to come from Northern lands. Had these clever red squirrels inherited their legendary journeying skills from the busy squirrel Rataskor who, according to Norse Legend, runs up and down Yggdrasil the world tree, carrying messages between the Eagle at the top and the Niddhogg below, while gnawing cunningly and everlastingly as he goes? 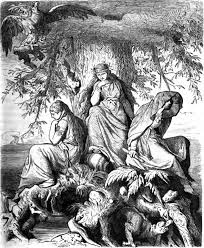 That’s the problem. Once a writing idea, like my squirrellish character, gets into your head,  there are stories about and around them everywhere.
I’ll end with this moralistic piece, taken from the ”Emblems” of the poet Francis Quarles, written in 1634.
"The squirrel when she must goe seeke her food
By making passage through the angry flood
And feares to be devoured by the streame
Thus helpes her weakness by a stratagem.
On blocks, or chips, which on the waves doe flote
She nimbly leaps : and making them her boats,
By helpe of winds, of current, and of tide
Is wafted over to the other side.
Thus, that which for the body proves unfit
Must often be acquired by the wit." 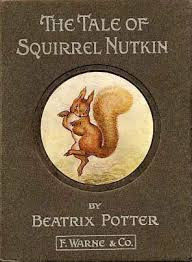 Postscript: While writing this post, I came across a new CBBC cartoon series about Peter Rabbit and his friends. I can offer no comment as I haven't seen it yet. Oh, well. 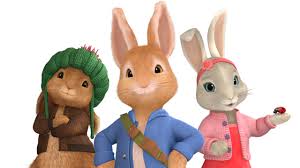 Perhaps my irritated crossness comes because, in this modern world, when children live lives far more removed from the natural world, I resent the smoothing and softening of these once-realistic anthropomorphic images?

Penny so fascinating! I never knew this. And try not to fret about Cbeebies. turn away this is not for the likes of us....!

Yes, fascinating! I had completely forgotten the Squirrels story - must re-read the Tove Jansson books. Never thought for a minute that squirrels really do go sailing. Wonderful!

How interesting. Now I'm going to be imagining the local park squirrels sailing on the boating pond.

What a truly wonderful post, Penny! And I suppose the boring grey squirrels don't go on voyages...?

I totally agree about the smooth, bland, smiley cartooney updated pictures. As if there weren't enough of that kind of things already - as if children can only be offered one style of talking animal. Horrid.

Goodness, I had no idea squirrels did such things in real life! Thank you, Penny. Wonderful!