I have always loved detailed, exotic flower designs such as William Morris's 'Pomegranate' wallpaper and Osborne & Little curtains. But until I visited the Queen's Gallery recently, I had no idea that they were all inspired by an extraordinary 17th century woman. 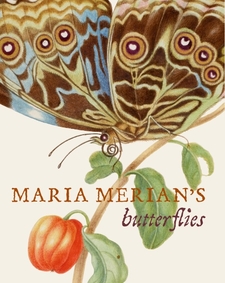 Maria Sibylla Merian was born in Frankfurt in 1647. Her father was Matthäus Merian, a successful printmaker and when he died only three years later, her mother married the still-life artist Jacob Marrel, who taught Merian to paint accurate and detailed flowers.
While raising a family, teaching and painting, she also published books of flower engravings, as reference for embroidery and amateur painters.

From childhood, she was also fascinated by the life-cycles and habitats of insects. Merian's full colour compositions were not only elegant but also carefully observed and naturalistic. The caterpillars, chrysalis and adult butterflies are shown on the actual plants on which they fed. Most naturalists then still believed that caterpillars and butterflies were distinct species and Merian was one of the first to understand the metamorphosis of insects. Her pioneering work on the relationship between animals, plants and their environment, and that specific food was vital to the survival of each species, made her the first 'ecologist'.

After separating from her husband, Merian moved with her two daughters to a Labadist commune in Waltha castle in Holland. Choosing to live in simple austerity, she continued her studies including into the metamorphosis of frogs. When the commune broke up, she moved to Amsterdam, then a thriving centre of art and nature, and saw her first pineapple.
Merian was also fascinated by the specimens of exotic insects that were arriving into Europe from South America. But as they were dead, she could not observe their life-cycles. In 1699, she sold all her paints, prints and copper plates, and set off with her 21-year old daughter, Dorothea for Suriname. A Dutch colony in South America, it had been called 'Willoughbyland' until 1667, when the British exchanged it for some swampy islands further North, now called New York.

Maria Merian lived in the capital, Paramaribo, with Dorothea and explored the surrounding forests for plants and animals to draw, and caterpillars to rear and observe. For two years she painted scientifically accurate illustrations, until her ill-health forced them to return home.
Kate Heard's book Maria Merian's Butterflies [ISBN 978 1 909741 31 7] is a treasure to behold and tells the story of Merian's life and work with 150 colour illustrations.
All illustrations copyright Royal Collection Trust/ Her Majesty Queen Elizabeth II, 2016.

FABULOUS pictures - thanks for this, Janie!

Best flower shop in the city! Their 'ready to go' floral arrangements are the best deal in town - and last well over a week. Plus, they always seem ready for BloomThat Flower Delivery - so great to pick them up on way home from dinner.