Historian of the soul, by Vanora Bennett


Sometimes I want my history brave. Dangerously brave. Also full of integrity, thoughtfulness, passion and poetry. That’s when I’m glad there are women like Svetlana Alexievich in the world.

When this Russian-speaking author won the Nobel Prize for Literature last autumn, for non-fiction writing exploring the pain in Soviet and post-Soviet history, from the Second World War to today, I had never read her work. 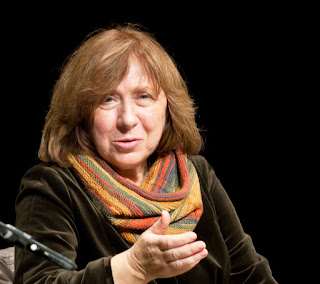 I knew I’d have to. I am a Russianist, after all. But when I first read the citation from the Stockholm judges for “polyphonic writings, a monument to suffering and courage in our time” – her books are compilations of the individual testimonies of the thousands of people she has interviewed since 1980 – I'm afraid I had a mental picture of a sort of enormous choir of depressed people in nasty clothes shouting, in dirge-like unison, about how awful everything was. It made me feel tired in advance. I didn’t much want to try.

Until very recently, it would have been all but impossible, anyway, since it was a challenge even to find her work. In her home country of Belarus - to which she returned in 2013 after more than a decade away, in France and Germany, avoiding the Soviet-style rule of its strongman president - her books used to have to be smuggled in from more adventurous Russia. (Things have eased slightly since she went back to her two-bedroomed flat in Minsk). The five-volume Russian-language set is hard to get, even in London, a city stuffed with Russian émigrés; English translations have been done piecemeal by small presses.

But now, in the wake of her Nobel win, a coherent English-language canon is coming into existence at last. In April, Penguin brought out a new translation by Anna Gunn and Arch Tait of Chernobyl Prayer: A Chronicle of the Future, Alexievich’s account of life near the nuclear power station whose fourth reactor blew up in 1986, 30 years ago. Penguin will have new translations this October of Boys in Zinc (about the Soviet war in Afghanistan) and War’s Unwomanly Face (Alexievich’s first book, on women in the Second World War) and finally – appearing for the first time in English – Last Witnesses (on the legacy of the Second World War), due in September 2017. Meanwhile, Second-hand Time, her most recent work – a searing examination of ordinary lives from the collapse of the Soviet Union to the chaotic Nineties and the rise of Putin after 2000 - got its first English-language publication in May with Fitzcarraldo Editions, in a translation by Bela Shayevich. 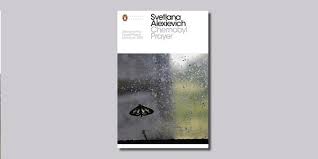 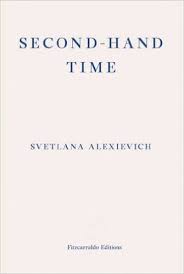 And so I’ve been catching up. And developing a big case of hero-worship.

Alexievich has been doing the authorial rounds in the UK in the past week or two, talking at Hay and Cambridge and giving interviews; a victory lap, marking her global recognition.

Having seen her at the Cambridge literary festival on Tuesday, I now know her to be a short, stocky woman of 68, with brave auburn hair, a composed manner and an orange scarf. She grew up in a Ukrainian village with few men (she cites the women’s stories as a model for her work). Her parents were schoolteachers; her father also served in the Red Army. She could never persuade him out of his Communist beliefs. She was of the perestroika generation, one of the kitchen liberals – she now calls them “romantics” – who longed for the Soviet demise before it happened, then wondered what was left. She raised her sister’s four-year-old after the sister died of cancer, as many Belarusians did after Chernobyl. That daughter now has a daughter of her own, living in Minsk too.

Both Alexievich’s low voice and her smile have sadness in (though she can be amusing). She was a journalist and is very frank; on winning, she was televised telling journalists that she loved “the good Russia” of civilization and culture, “but not the Russia of [Stalin secret police chief] Beria and Putin.”

Her subject is anything but funny - the horrors of the 20th century and the Soviet “Red empire”, “a history of how people wanted to build the Heavenly Kingdom on earth….In the end, all that remained was a sea of blood, millions of ruined human lives.”

She is influenced by the Belarusian writer Ales Adamovich, whose collective memoir of the 1941-44 siege of Leningrad was built, like her work, on multiple testimonies from ordinary people trying to survive. She quotes him as believing “that writing prose about the nightmares of the 20th century was sacrilege. Nothing may be invented. You must give the truth as it is,” she explains.

It can be frightening, even nauseating, to read her true stories. The Red empire was a terrifying place, built on mass sacrifice and multiple acts of heroic self-sacrifice for the greater good. At the beginning of Second-Hand Time, Alexievich sets the stage: “People who’ve come out of socialism … have a special relationship with death. The stories people tell me are full of jarring terms: ‘shoot’, ‘execute’, ‘liquidate’”.

Her style is to go right beyond the news story and inside the hearts and minds of her individual interview subjects, offering intensely revealing stories from hundreds of people in each book which each shed a unique light on a big subject. She has called herself a “historian of the soul”.

Into these painful individual stories, every now and then, comes a glimpse of the big history you can always feel coming into existence just out of sight. Through an accumulation of small agonies, for instance, you come to understand how the Soviet authorities’ slapdash response to Chernobyl led to a new questioning of those authorities, and, five years later, to the collapse of the Soviet empire. For one engineer at a nearby synthetic-fibre factory, the first clue was the alarm of some visiting German experts. They demanded doctors and radiation meters. Then they left.

“And how did we view their behaviour? Oh, just look at those Germans, they’re hysterical! What clowns! Look at our men, they’re real men! That’s Russians for you! Daredevils! Battling the reactor! Not afraid for their own skin! (Becomes pensive). But that is a kind of barbarism too, the lack of a sense of self-preservation. We always say ‘we’ instead of ‘I’. ‘We will show what Soviet heroism is!’ but then what about me? I don’t want to die either. I’m frightened. After Chernobyl, that happened automatically. We began learning to say ‘I’.”

I spent seven years after the Soviet collapse in 1991 living in Russia. Astonishing though her writing about that period is, in Second-Hand Time, the themes on the minds of the people she talks to in it are at least familiar. But I have never been to Chernobyl, and never been able to understand why some eccentric souls decided to go on living nearby after the nuclear plant’s reactor number 4 exploded in April 1986. I think I’d sweepingly, sneeringly assumed they must be village idiots or elderly simpletons who barely noticed that the land had emptied of all but odd-shaped animals. Alexievich took a more considered and humane view, from close up. Reading the book made me understand, from the heart as well as the head, and from many people’s points of view, and weep for them.

I almost never weep into books, especially not very large non-fiction books. This is my warmest possible recommendation. What she says is not just grandiose self-publicity - this woman really is a historian of the soul. You will be moved as well as informed. Read her books and see for yourself.

Interestingly, however, Russia’s literary establishment is horrified that Alexievich has won this international recognition.

The initial response from Moscow was vitriolic. ("Alexievich is a classic anti-Soviet ... a traitor," howled one critic in the cultural weekly Literaturnaya Gazeta; author Zakhar Prilepin wrote in Izvestiya that she had been chosen purely for opposing the Kremlin and was “not a writer”; President Putin kept quiet). This was not altogether surprising. Four times out of five in the million-dollar prize’s history, Nobels to Russians have been given to Kremlin enemies, from Ivan Bunin to Boris Pasternak to Alexander Solzhenitsyn to Joseph Brodsky. Alexievich is not a woman to mince her words; one of her major themes is the abuse of power. Finally, even though she writes in Russian, she is not an insider on the Moscow literary scene, or even "properly" Russian, but a half-Belarusian, half-Ukrainian Slavic-little-sibling mashup. At a new low ebb for Russia’s relations with the West, after the outbreak of conflict around Ukraine, it was to be expected that Moscow would experience this award going to this woman at this time as a slap in the face.

She may agree. At the book event I attended, Alexievich was asked lots of questions about politics. She sidestepped them, kind of. She has said that the culture of the barricades is an intellectual distraction, and she must free herself of politics if she is to focus on her true calling, writing; yet a bit of her visibly enjoys the fight. She couldn’t quite stop phrases like “Putin’s craziness” dropping from her lips. I sensed that she was half-itching to roll up her sleeves and give battle.

There is a breed of these female intellectuals in the former Soviet world, ordinary-looking women strangely unafraid of telling truth to power. There is something in Alexievich of Anna Politkovskaya, the journalist whose astonishing reports showed the human face of the war in Chechnya; Galina Starovoitova, the liberal politician of the Nineties; and the country’s doughty, unstoppable human rights activists, from Andrei Sakharov’s widow Yelena Bonner to Svetlana Gannushkina of Memorial. They don’t always make old bones. Politkovskaya was shot dead outside her front door in 2006, and Starovoitova in 1998. Their outspokenness is feared by many in their buttoned-down homeland. But they are also reverently respected, at least by a few.

I may be more of an armchair soldier myself, but that only makes me more reverent when I come across the truly heroic type. I hope Alexievich will make old bones. And I am eagerly awaiting her next book.

Thank you, Vanora, for introducing me (and others) to Alexievich's books. A moving piece and obviously, it is not only her hair that is "brave"!

Great stuff, Vanora. I shall certainly read her.

I actually enjoyed your post. The way you delivered your view/opinion, was very insightful. Your contribution to this community will be very fruitful to us.
Go Viral

I read Voices From Chernobyl, as it is called in the US, this spring. Now I am determined to work through the rest of her books. Your profile of the author is so good. I enjoyed reading it. Thank you!

Very nice post and right to the point. I am not sure if this is actually the best place to ask but do you folks have any idea where to hire some professional writers? Thanks in advance :) Download Adobe Flash Player For Android tutorial