I’ve recently returned from a writing retreat in Scotland. For most of the trip I was stuck indoors behind a laptop, somewhere in the 17th century. But one glorious Sunday morning I decided to take the air. I needed some historical inspiration. I settled on a trip to Cawdor Castle.

Now, I’ve been there before, two years ago, but I wanted to go back. Given the abundance of both natural and historical beauties in the area (Braemar, Balmoral and Blair Athol Castles, Culloden Battlefield and the Cairngorm National Park, to name a few) why did I feel so drawn? I pondered this as I sped up the A9, but at first sight of the castle, I remembered why.

Cawdor looks like a fairytale – the kind of place you’d find Cinderella scrubbing pots in the kitchens and Rapunzel spinning gold in the tower. It’s picturesque, intimate and brimming with personality. And it looks so very Scottish. 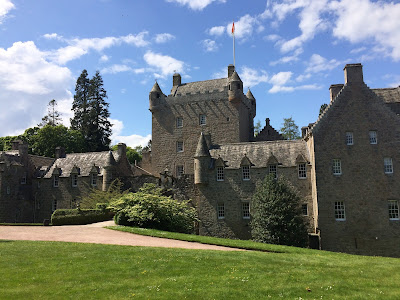 Cawdor is very much a home. Owned by the Campbell family, the current resident is the Dowager Countess Cawdor, who inherited it from her husband, the 6th Earl of Cawdor, in 1993. The death of the 6th Earl sparked a much-publicised family feud involving court battles and the publication of scandalous memoirs, but nothing of that unfortunate soap opera is evident to the visitor. In fact, it’s quite the opposite.

A friendly, knowledgeable guide tells me that the family uses all the rooms open to visitors. That’s evident in the clutter of family photos and knickknacks amid the impressive Restoration furniture and stunning Georgian portraits. The Countess collects art and an eclectic mix of paintings and sculpture grace the rooms and gardens. There’s a whole corridor dedicated to modern works and recent portraits sit next to 17th century ones. They should look out of place, but they don’t. The main rooms have the air of personal space – a TV in the corner, a pile of magazines – as if someone’s just left the room to fetch a cup of tea. 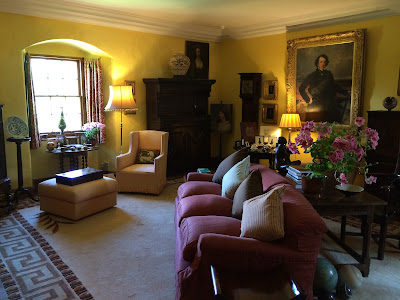 The Countess lives here all winter when the castle is closed to the public, my guide explains, and she comes back and forth throughout the summer. I ask if the castle is ever full of guests, imagining weekend shooting parties worthy of Downton Abbey. ‘Oh yes,’ he says. ‘There’s another ten bedrooms you won’t see, and a fabulous bathroom. I’ve known it full up, all the fires blazing.’

‘But which rooms are hers?’ I ask.

‘That room you’ve just been in, the one with the huge bed – that’s her bedroom’.

I’m not sure how I’d feel about having thousands of people traipsing passed my knicker drawer, there does seem something intrusive and voyeuristic about it, but I’m nosy (of course I am – I’m a writer!) and the longer I stay and chat the more fascinated I become by the practical detail of these people’s lives, almost more interesting than the history itself. 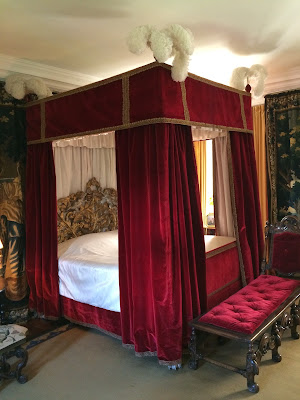 And what about the history? What of the infamous connection to Macbeth?

‘There is none,’ my guide says, looking slightly bored of the question. ‘The castle was built 400 years after the real Macbeth lived. Shakespeare took liberties with the history.’

Continuing the fairytale atmosphere, he then tells me about the mysterious thorn tree, around which the original tower house was built. Legend has it that the Thane of Cawdor, who had a small castle about a mile away, decided to build a new, stronger tower. Following instructions he received in a dream, he loaded a coffer of gold onto the back of a donkey and let it roam for a day – wherever the donkey lay to rest for the evening would be where the new castle would be sited. The donkey chose a holly tree and it’s around this tree that Cawdor Castle was built.

This story is told in the Thorn Tree Room, a dark, dank fortified space, complete with small hidden dungeon, where it’s explained that radiocarbon tests date the tree to 1372. The earliest documented date for the castle doesn’t appear until 1454 – a license to fortify, granted to the 6th Thane of Cawdor (or Calder as the name was originally spelt). So although this was certainly the Cawdor seat, it’s far too late for the 11th century Macbeth. 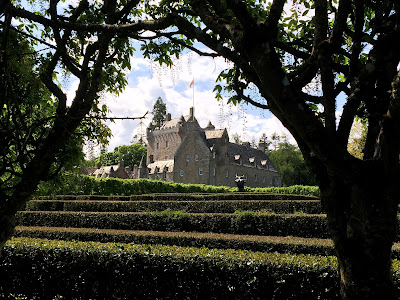 The good humour of the staff is matched in the information available in each of the rooms. This isn’t a place with interactive displays and quizzes to entertain the kids, but it doesn’t need it. Slightly dated typed panels, filled with facts and scattered with informal quips are charming and fit the atmosphere perfectly. Of course, the whole estate is run as a commercial enterprise, and there’s the obligatory tearoom and gift shop, well stocked with tartan, but there’s nothing sterile or too corporate about it. I felt I’d been invited to snoop around a private home, one with 600 years of stories in its walls, and what could be more inspiring than that?

Cawdor Castle is open every day until 2nd October.