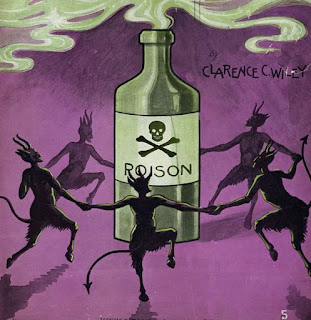 Throughout the Middle Ages people were terrified of being poisoned and with good reason. Writing in 1470, Peter of Abano, identified 70 different substances that were deadly poisons, and this did not include the venomous animals or their body parts. Wealthy men employed tasters who would try every dish before their master ate it, even pressing their masters’ napkins to their lips before they were used, in case the cloth had been soaked in poison. With so many interesting lethal substances to choose from, who can blame them for being nervous. Here are ten poisons that they most feared -

1. Monkshood or Aconite (Aconitum napellus) – This plant was originally called Odin’s helm or Tyr’s helm after the northern gods. It was also known as wolf’s bane. It was dedicated to Hecate, the moon goddess of the witches and together with deadly nightshade was one of the ingredients in the flying ointment, a powerful hallucinogen. It was such a lethal poison that growing it in Roman times was punishable by death. The juice was frequently used in warfare to poison the wells and the sources of drinking water of the enemy. It was favored by the lower classes as a means of dispatching troublesome spouses, or other family members. But the nobility preferred hemlock.
﻿﻿
﻿
2. Hemlock (Conium maculatum) – known as devil’s blossom, bad man’s oatmeal, scabby hands or kex, it is in fact a member of the carrot family. It causes extreme dizziness, numbness then death. In Greek and Roman times one of the methods of execution was to force the condemned to drink hemlock and this is how Socrates died in prison. It is so much associated with witchcraft and the devil that the plant symbolizes death by poisoning.
﻿﻿
3. Cantharides also known as Spanish Fly – is made from an emerald green blister beetle, Lytta vesicatoria. It was an early and powerful Viagra for both men and women, and often used to spike drinks, causing the victim to become highly sexual aroused. But too much could be fatal. The Marquis de Sade was tried for accidently killing prostitutes at an orgy, by feeding them aniseed-flavored Spanish fly pastels.

The favorite poison of the Medicis was Aqua toffana, a mixture of arsenic and Spanish fly and as little as four drops in water or wine could prove fatal. Aqua toffana had the convenience of being both undetectable in food and taking several hours to kill, giving the poisoner ample time to escape.

If death from Spanish fly was suspected, the victim’s organs were ground up in oil and smeared on the shaved skin of a rabbit. If the victim had died from Spanish Fly poisoning, the rabbit’s skin would blister.

﻿
4. Deadly Nightshade (Atropa belladonna) which Chaucer called dwale, was a well-known sleeping draught. It is believed to have been the poison added to the water-wells during the Parthian Wars which killed Marcus Antonius’ troops. According to folklore, in the 11th century the Scots who had signed a truce with Sueno the Dane, were able to take advantage of the truce to add the juice of Deadly Nightshade to the Danish army’s provisions. It didn’t kill the Danes, but made them so drowsy that the Scots were able to attack and slaughter them. Most modern historians now argue that this battle never took place, but it lingers on in legend.

5. The Composition of Death – This was a poison recipe found in a medieval book of spells, known as Grand Grimoire. Those who wanted to prepare it were told to use a new, glazed pot and add – red copper, nitric acid, verdigris, arsenic, oak bark, rose water and black soot. It took a long time to prepare as you had to boil the mixture for about an hour after each new ingredient was added.

6. Fly agaric (amanita muscaria) – a fungi with a red top studded with white spots that looks like the classic pixie toadstool. It first produces a sensation of being drunk, then delirium, with death usually occurring in twenty-four hours. Deadly fungi were popular poisons in the Middle Ages because they were so easy to obtain without anyone knowing, and simple to slice up and add to stews and soups. Fly agaric, steeped in milk was used to kill flies, so it was often found in homes and kitchens. It was only one of twenty-five poisonous fungi and the symptoms generally produced by consuming any of these deadly mushrooms or toadstools included stomach cramps, vomiting, diarrhoea, delirium and convulsions. In the Middle Ages, these symptoms could easily be mistaken for fevers such as dysentery or from eating bad meat, so many poisoners must have escaped justice if they used this poison.

7. Pig’s Blood and Salvia – Normally fresh pig’s blood was harmless and used to make blood puddings, but the medieval Italian poisoners, who were experts in the art, had perfected a poison made by allowing a pig carcass to decompose then mixing its blood and saliva with arsenic to create an exquisite poison combining both the mineral poison and those toxins produced from putrefaction.

8. Toads – In the Middle Ages it was widely held but erroneous belief that the fluid excreted through the skin of a toad was poisonous. Indeed a rumour which circulated after his death suggested that King John had been murdered by a member of the Knights Templar or a friar who had squeezed a toad inside the king’s goblet. The fluid dried, creating an invisible coating inside the goblet, before the King unwitting added the wine to produce a lethal combination. In fact, King John probably died of dysentery, but such was the belief in poison conspiracies in those days, that the toad story was much more widely believed.

European toads do excrete two poisonous substances through the skin which have a numbing and mild hallucinogenic effect, though they are nowhere near as toxic as toads and frogs of South America.

9. Bacterial poisoning – Although virus and bacteria were not understood in past centuries, they did recognise that decaying corpses gave off a ‘poison’ which could be lethal to the living, so throughout the centuries since ancient times, armies have frequently poisoned their enemy’s water supplies by dumping rotting corpses of animals or people into wells or rivers upstream of where the camped army was taking its drinking water. Caltrops, spiked metal balls designed to pierce the feet of horses and men, were often dipped in the fluids of rotting animal carcasses or festering wounds to poison the blood of any who stepped on them.
﻿

10. Arsenic - No poisoner’s tool kit would be complete without arsenic. Although the symptoms of slow arsenic poisoning were not recognised until the 1700s, yellow arsenic trisulphide called orpiment was known as a medicine as early as 5th Century BCE and the alchemists believed it to be a key ingredient of the Philosopher’s Stone. Nero may have used yellow arsenic to murder his stepbrother, Britannicus, so as he could become Emperor of Rome. But it was in 8th Century that the Arabic alchemist, Jábir ibn Háyyan, became the first in Europe to produce white arsenic (arsenic trioxide) by roasting orpiment and inadvertently produced the poisoner’s dream, the first reliable and lethal poison that was odourless, tasteless and colourless and would work in powder, solution or gaseous form.

If all this talk of poisons is making you nervous, in my next blog I will let you into the secret of the favourite medieval antidotes.
Posted by Karen Maitland at 00:30

I very much enjoyed this - thank you. I needed to find a good poison for my new book and, after some interesting research, settled on the one that heads your list: Monkshood. I was so taken with this beautiful and deadly plant that I've ordered a couple for my garden - and they were delivered just as I was writing this!
Also very happy to learn that it was once called Tyr or Odin's helmet - I hadn't come across that elsewhere. I am really going to enjoy these sinister beauties glowering from a shady corner.

Indispensable information and entertaining too - thank you!

Take care with that aconite! I believe it's dangerous even to touch it!

I shall come to you next time I need a poison for a plot.