History of Bedlam by Miranda Miller

While I was writing my Bedlam Trilogy (which will be published as one volume next year by Peter Owen), I became fascinated by the history of the hospital before the nineteenth century, the period I was writing about.

In 1247 The Priory of St Mary of Bethlem, Bishopsgate was founded and stood where Liverpool Street Station is now. It was to provide a fundraising base for the Church of St Mary of Bethlehem in Palestine and from the 1330s it is referred to as a hospital. The first references to Bethlem housing insane patients date from the early fifteenth century and it is therefore the oldest psychiatric hospital in Europe that is still being used. Henry V111 seized the hospital as an ‘alien priory’ and it became both ‘royal’ and a City institution (until the NHS took it over in 1948), The Royal Bethlem Hospital, jointly administered with Bridewell, a former palace that became a prison. Of course, definitions of madness change constantly and people suffering from dementia, post natal depression and learning disabilities would probably have been inmates.

The hospital’s history is inextricably involved with the history of London and the word Bedlam would have begun as a Londoners’ contraction (like "innit"). Recurring scandals about the treatment of the inmates soon gave the word its association with chaos and pandemonium. The hospital was near two London playhouses, The Curtain and The Theatre, and it has been suggested that Shakespeare may have visited it to observe madness. Jacobean plays, including The Honest Whore, The Duchess of Malfi, Bartholomew Fair and The Changeling, all refer to it as a place of horror. In the late seventeenth century one of the most famous inmates was Lady Eleanor Audley, who published her Strange and Wonderful Prophecies and sat on the Bishop of Litchfield’s throne to declare herself Primate and Metropolitan. She should now, perhaps, be considered something of a feminist hero, as the first woman bishop. Oliver Cromwell’s gigantic porter, Daniel, was also a prophet and owned a bible that was said to be a present from Nell Gwyne. People used to gather outside the hospital beneath his window to listen to his preaching. 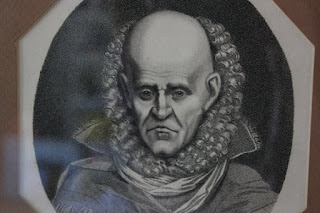 After the Fire of London the hospital was rebuilt at Moorfields (where Finsbury Circus is now), in an elegant, spacious building designed by Robert Hooke, a friend of Wren’s. An anonymous poet wrote that:
So Brave, so Sweet does it appear,
Makes one Half-Madde to be a Lodger there.

The galleries of the new building attracted many visitors, some of whom teased and provoked the inmates, and this was allowed until the late eighteenth century. In 1728 Dr James Monro was appointed as physician, the first of a dynasty of ‘mad-doctors’ - four generations of Monros - who ran the hospital until 1853. His son,Dr John Monro, wrote that “madness is a distemper of such a nature, that very little of real use can be said concerning it.” Alexander Cruden, a writer who was briefly incarcerated in Bedlam in the eighteenth century, said bitterly of the physicians there: "but is there so great Merit and Dexterity in being a mad Doctor? The common Prescriptions of a Bethlemitical Doctor are a Purge and a Vomit, and a Vomit and a Purge over again, and sometimes a Bleeding, which is no great mystery". Jonathan Swift, who was a Governor of the hospital, suggests in his Tale of a Tub (1704) that Bedlam is the best place to recruit the nation's politicians since the inmates could not be any more insane than the men in power.

This is the terrifying image of Bedlam that we all know:

It is, of course, the final scene of Hogarth’s The Rake’s Progress (1735), sales of which raised funds for the hospital. The fashionably dressed women have come to the asylum as a social occasion, to be entertained by the bizarre antics of the inmates. Around Tom Rakewell a tailor, a musician, an astronomer and an archbishop are suffering from various delusions. One man thinks he is a king but is naked, carrying a straw crown and sceptre.

In 1786 Margaret Nicholson, convinced she was the rightful heir to the throne, made a rather feeble attempt to assassinate George 111 with a blunt knife: 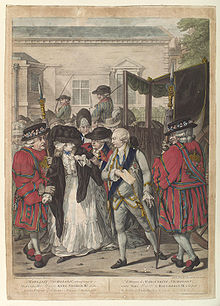 The king, whose own experience of madness had made him compassionate, said: ‘take care of the woman - do not hurt her, for she is mad.’ A few years later James Tilly Matthews was confined to the hospital on the grounds of his very complex paranoid delusions. In fact, he might have been a spy or double agent actually persecuted by Lord Liverpool’s government ( for more about this amazing story see a fascinating book by Mike Jay: The Air Loom Gang: The Strange and True Story of James Tilly Matthews and His Visionary Madness). 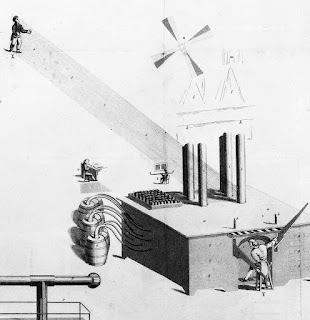 By the end of the eighteenth century the once palatial building was collapsing so that ‘not one of the floors are level, nor any of the walls upright.’ The hospital had to be demolished and in 1815 moved to St George’s Fields, then in Surrey but now in Lambeth, where the Imperial War Museum is. Anyone interested in the history of the hospital should visit a wonderful new museum, The Bethlem Museum of the Mind, which is in Beckenham, Kent.

Really interesting - it's been very dramatically re-created in Penny Dreadful, complete with Frankenstein and Jekyll and Hyde!

I read a book called Puckler's Progress some years ago, which contains the interesting Letters of a German prince who visited England in the early 19th century to try and find a rich wife, and he wrote home of his impressions of England. One of his visits was to Bedlam, and I am glad to say he thought the inmates were humanely treated.

To clarify your last paragraph, the hospital was moved to the Surrey countryside in the 1920s, and is still there in Beckenham, and as you say, has an interesting museum.

Fascinating...thanks for the reminder to visit the new museum.