August 1914: The Enemy Within? by Leslie Wilson 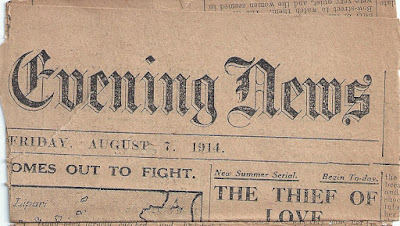 'Two Germans entered the tube at Belsize Park. While the train was in motion they conversed in German, but during the short periods of silence at the stations they relapsed into bad, gutteral French. Two young men, hearing a reference to carrier pigeons, broke their journey at Leicester-Square and followed the Germans through Coventry-Street to a café. '

I was given this brown scrap of newspaper by another Quaker; it comes from the archive of Edward H. Milligan, once archivist at Friends House, a man who has been a valued resource for anyone working on Quaker history for many years. He has recently moved from a house to a flat, and has had to pass on many of his impressive collection of books and documents, quite a few of which I have been lucky enough to acquire. 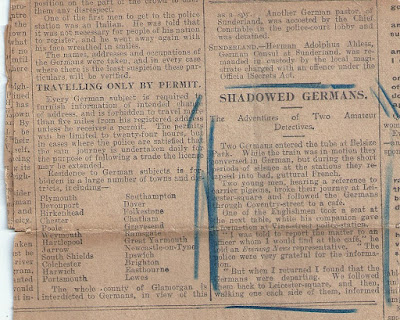 The zealous young men were hugely excited at the opportunity of catching German spies and fifth-columnists. Did they really hear the words 'carrier pigeons' (Brieftaube), or was the wish father to the thought? They might have been complaining about dust (Staub) for example, or mentioning that someone was deaf (taub). Or the word might have been used figuratively. (Note that the French had to be 'gutteral', a term of abuse against foreign languages that I don't get, since gutterals are just gs, ks, chs, js, etc, and English has plenty of them). One young man sat down to keep the villains under observation, while the other one rushed off to Vine Street police station to tell them what they'd discovered. He then returned, to find that the Germans were departing. The amateur detectives trailed them to Leicester Square, hemmed them in, and told them they were being watched. The Germans 'hurried on, hoping to get rid of us,' and when they saw police, tried to make their escape. Or so the young men told the police. The amateur sleuths 'marked the house which they entered, and informed the local police, who have the matter in hand.'

And all for the crime of talking German between themselves, and talking bad French at the stations. 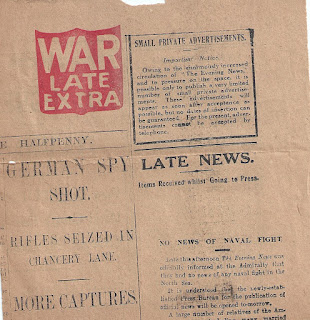 WHOLESALE ARRESTS, proclaims another column. Two 'alleged Germans' who said they were Russians, were overheard by a teacher of German, 'talking suspiciously' in Conway, and were arrested. (They might well have been Russians of German ethnicity). In London, a German was arrested as a spy and the police seized 'several large deed-boxes' full of documents. The man was held, pending enquiries, at Moor Lane police station. The documents were maybe his business papers. Three supposed German spies were captured on the railway line at Maidstone.

German reservists were being 'arrested wholesale.' I wonder if they were really reservists, since the German reserve had already been mobilised by then, so why would 'a hundred and thirty Germans and Austrians' arrive on boats in the Mersey? Maybe the captains were staggeringly bad at navigation? Apparently many Germans were employed in the lace trade in Nottingham, and they too are described as reservists, and were being arrested 'wholesale.' I do wonder if any young men of military age were considered to be reservists.

Maybe someone has some information that could elucidate this for me?

What the last snippet does reflect is the number of Germans who had lived cheerfully and inoffensively in this country for hundreds of years up till the beginning of the war.The German Lutheran church, in London, pictured below, was founded in 1762.

Like Friedrich Wilhelm Singer, pastor of the German seamen's mission at Shields, who was remanded on bail, charged with spying.

The language employed is interesting. TELL THE POLICE! urges a headline, describing how more enthusiastic citizens were informing the police about the whereabouts of German residents, who were required to register immediately, or pay a fine of £100 or be imprisoned for six months. The registration offices were the police stations, and the paper says that since the early morning they had been 'invaded' by foreigners making enquiries. So it was an annoyance (to the Evening News, at least) that the Germans and other foreign nationals were following instructions. The paper also seems to regard it as outrageous that many of the Germans were prosperous, and arrived in carriages and taxi-cabs (the implication being that they'd grown rich on payments from the Imperial intelligence agency?).

Spy fever was running high: telegraph wires were reported as being 'tampered with' by Germans, and also soldiers and sailors were said to have been accosted by Germans, eager to pump them for information about troop movements, warships and stores. There was a German who 'left England recently for Germany, who for some time served in a British regiment and obtained the rank of sergeant.' One wonders how much information he'd have gleaned, if he was a spy, serving in such a modest capacity.

There were also, apparently, armies of spies masquerading as commercial travellers. Clearly, there were German spies working in Britain at the time, but surely they'd  have had to be pretty stupid to employ such very visible agents.

In an incident that has spooky resonances of poor Jean Charles de Menezes's murder by the British police, a man 'of foreign appearance' was seen carrying an attaché case near the high level bridge over the Tyne in Newcastle. A patrol challenged him, but instead of stopping he began to run, got into a boat and pushed off. The patrol got another boat and gave chase, but 'as he still declined to stop' he was fired on and wounded. He was said to have thrown the attaché case into the river (or maybe it just fell in?) He died soon after he'd been captured. 'The authorities are very reticent', the paper says.

This story has come through two filters, that of the patrol and that of the newspaper. There are plenty of instances of modern shootings where the police account has been edited, shall we say? One wonders what was really going on there. Of course, the man could have been a quite ordinary thief.

At the same time, shopkeepers were jacking up the price of stores, and there were demonstrations against grocers and bakers in Hitchin; people were panic-buying provisions, though expressly told not to, since, for example 'mild-cured bacon does not pretend to keep like the old farmhouse kind'. People were buying a year's supply of potatoes, and also laying in butter; the paper advises against this, since 'the old-fashioned method of salting fresh butter and keeping it in jars is no longer followed. That last snippet demonstrates the usefulness for the nerdishly inclined historical novelist of reading old newspapers. So people were eating what my mother-in-law called 'sweet butter' at the time, rather than salted, which I grew up with and always supposed to be traditionally British. And anyone writing about the 19th century might like to know that salted butter was sold in jars. I wonder at what period specifically?Anyway, the uncertainty about food probably contributed to the general atmosphere of paranoia.

There were in fact around 50,000 Germans or Britons of German origin living in the country in 1914. German shopkeepers (even naturalised Britons) had their windows smashed in; Germans married to British women were marched off to internment camps, which were described by their inmates as 'veritable hell.'

People with German names changed them pretty quickly in order to avoid xenophobic abuse and violence; among them, of course, the Royal Family, who became Windsors instead of Saxe-Coburgs. Given that George V was the first cousin once removed of Kaiser Wilhelm, they might easily have fallen under suspicion.

What struck me, reading these ancient and fragile cuttings, was a resonance between the xenophobia and the outbreaks of racial and xenophobic abuse following the referendum result on June 23rd this year: sheer tribalism. One can only imagine the distress of all those people who had settled here and regarded these islands as their home, at what had occurred, and (because I am half German) I can imagine that many of them must have felt torn in half that their birth country and their adopted country were now at war and their neighbours suddenly hated them.

(The Evening News was part of Associated Newspapers by then, and was thus a sister paper to the Daily Mail.)


The painting of the German missionaries is the work of  George Kenner.
Posted by Leslie Wilson at 00:30

Yes, it's scary. Xenophobia is paddling away, just below the surface - or at least it was till recently. Now it seems less and less scared to show its face. (Sorry for the laborious image - it just happened!)

I think it's a pretty apt image, thinking about it!

My Father, and Grandparents were from the UK but living in France when the second world war broke out so were classed as refugees and given accommodation in Liverpool. They spoke English outside but as my dad mainly spoke french and was only 7 at the time they spoke french in the house. A neighbour heard them over the garden fence and reported them, and despite being a young couple with a 7 year old boy they were put in an internment camp until the family in the UK who had signed for them could get them out. Even to my fathers last days he never spoke of the camp only the going in and coming out! Apparently as they walked back in the house in Liverpool my Grandma said very clearly, 'from now on only English!' He never spoke french again and by the time he was telling me about his childhood he no longer remembered any french. I wonder what it was like for those without family, help or support.

Fascinating, Leslie, and so many depressing echoes still around us. Two German friends were on holiday (in liberal Brighton) last week and people in shops, hearing them speak German, demanded to know when they were going home.

What a dreadful story, Ruan. When the French were Britain's allies, too. And I'm appalled to hear about such a thing in Brighton, of all places, Miranda. Clearly such prejudices are deep rooted in the human psyche. I wonder how they can be countered? I think teaching primary kids foreign languages might help? Oh, dear.