'No more Hiroshimas' by Lydia Syson

Thirty years ago a new university friend invited me to come and spend Christmas with her family in Hiroshima.  Until I met her, Hiroshima was a word on a banner - an idea, a symbol of something so huge and terrifying and unimaginable that in my nineteen-year-old mind I think it was still a wasteland.  How could the city possibly have been rebuilt? Hiroshima was the cherry tree in Tavistock Square – a ‘never again’ reminder of the worst inhumanity I could conceive and most importantly, a memorial to its victims.  A Cold War child in a left-wing North London household, I had spent my youth marching for CND, passing round petitions, and organising film shows and discussions at school. ‘Enola Gay’ was on the radio and nuclear holocaust at the back of our minds and in our dreams, but we tended to think about dying, not surviving.

‘Hiroshima’ seemed untranslatable into bricks and mortar…or as it turned out, concrete and cabbages. In the mid-1980s decorative brassicas were very much in fashion in the window boxes of one of the most modern city I’d ever visited. On my arrival, after a long and memorable Aeroflot flight via Moscow and a journey on a bullet-train, the first thing that struck me was my poor choice of footwear: I’d had no idea I’d have to remove it so often. My winter shoes - slightly Edwardian lace-up boots - took forever to get on and off, and I was shamed by the holes in the heels of nearly every pair of black tights I owned. In those days all the minutiae of everyday Japanese life were thrillingly unfamiliar – the very hot, deep bath, refilled once a week; heated tables and loo seats; wearable duvets; bento boxes, pachinko parlours and meals from slot machines. Meanwhile, although the knowledge of what had happened in Hiroshima hung over me, the city itself at first seemed bland and unexceptional. It was almost disconcerting.

Until my friend took me to the Peace Memorial Park, the open space which had once been the heart of Hiroshima.  Commemorations will be taking place there today as they do every year on the anniversary of the first atomic bomb to be used in warfare, remembering more than 80,000 people killed on the day of the attack, and 140,000-150,000 more who died from radiation poisoning in the years that followed. I saw the skeleton dome of one of the only buildings left standing, still preserved as a ruin. I learned of Sadako and her paper cranes. And I was overwhelmed in the museum, which was smaller then than it is today and offered less context to the whole ghastly war, its ending, and its aftermath. All these years later, it’s hard to write about what I saw and felt there. It seemed, and still seems, unspeakable.

Yet somehow - remarkably - Kathleen Burkinshaw, author of The Last Cherry Blossom, published this week in the US by Sky Pony Press, has managed to put into words the experience of growing up in Hiroshima during the Second World War. 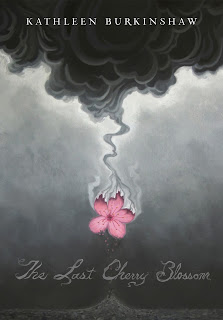 From her mother’s memories, and her own careful research, Kathleen has created an original and compelling novel about a twelve-year-old girl trying to make sense of the gaps between newspaper reports, government propaganda and what she gradually discovers for herself: neighbours going to fight who never come home, the pressures of ritual suicide, what it really means to serve your country.   Meanwhile, as her own household changes, with new marriages for both her aunt and her father, Yuriko also finds disturbing holes in her own family narrative. She is forced to rethink her identity at every level.


It’s a completely absorbing world. All the details of family relationships, school friendships, everyday life, customs, stories, and ideas about honour and shame are woven in beautifully. When pika don hits – the literal translation is ‘flash boom’ – we understand exactly what it has destroyed. Burkinshaw handles the moment and its aftermath with great sensitivity. The Last Cherry Blossom takes its title from a favourite saying of Yuriko’s Papa, and also evokes the spirit of endurance in Hiroshima, manifested in the blooming of cherry trees in Spring 1946 in soil where scientists had predicted nothing would grow for years. There are some books you read as a child which open your eyes, get under your skin, and stay with you forever. When Hitler Stole Pink Rabbit had that effect on me. I think The Last Cherry Blossom will prove an enduring novel. I also believe that its young readers will grow up asking more questions about where we are now in terms of nuclear warfare, whether we have learned anything from the tragedies of Hiroshima and Nagasaki, and asking themselves how they feel about that. 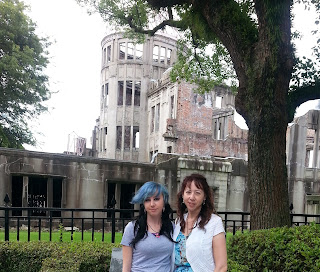 Thanks for this, Lydia.

One for my to-read pile. Thanks, Lydia.

And for my to-read pile, too. It sounds a wonderful book, though I suspect I'll need to be feeling strong to read it. I have heard hibakushas (survivors of the bomb) and seen a film of their memories, which I found pretty gruelling. I still find it hard to take, when people say the bombs 'saved lives.'