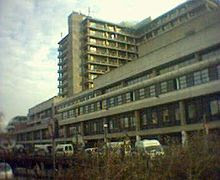 This hideous 1970s concrete building has loomed over Hampstead Heath for as long as I can remember. Last month I spent a lot of time in it, visiting my daughter and her new babies, and started to wonder about its curious name.

In 1828 William Marsden, a young surgeon from Yorkshire, found an 18-year-old girl dying on the steps of St Andrew's church Holborn because she couldn’t afford admission to a hospital. The only way for the poor to obtain free treatment was to be personally recommended by someone who subscribed to that hospital. She had been refused admission to three hospitals because she had no subscriber's letter, so Marsden cared for her himself until she died two days later.

This experience touched Marsden so deeply that he decided to open a hospital that would be free to all: “no ticket or recommendation from a subscriber is necessary to be provided …poverty and disease alone are the wretched qualifications.” He set up a small dispensary, which soon expanded and provided thirty beds, at 16 Greville Street, Hatton Garden. At first it was called the London General Institution for the Gratuitous Cure of Malignant Diseases but the name was soon changed to the London Free Hospital. 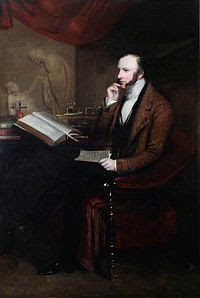 In 1832 "King Cholera" arrived in England for the first time and killed about 6,500 people in London. It was thought to be spread by a "miasma” or bad smell in the atmosphere, a theory supported by leading figures in public health, including Edwin Chadwick and Florence Nightingale. “Thus did the fatal disease rise like a demon bent on destruction; it took its course, not heeding mountain, sea nor clime; death was its object, man its victim, and the uttermost ends of the world its destination; wherever its cold hand was extended - the people died .... Death struggled with time itself, and gnawed the moments that separated him from his victim. “ 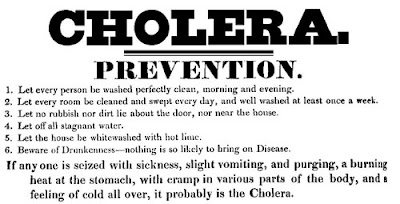 The London Free Hospital was the only London hospital to treat victims of the cholera epidemic, as other voluntary hospitals in London refused to admit patients with infectious diseases. Five years later, when the new young Queen Victoria became patron of the hospital, she changed its name to the Royal Free Hospital in recognition of this courageous policy. A few years later the hospital moved to larger premises, the former barracks of the Light Horse Volunteers in Gray’s Inn Road.

Marsden’s beloved wife, Betsy-Ann, died of cancer and Marsden resolved to research the causes of cancer, classify tumours and find new treatments. In 1851 he set up another small establishment in Cannon Row, Westminster. At first this consisted only of a dispensary where palliative drugs were prescribed but it gave Marsden the opportunity to study and research the disease. It grew into the Brompton Cancer Hospital, now the Royal Marsden Hospital, on the Fulham Road. It was remarkable because it was the first purely cancer hospital in the world and because patients were treated for free.

Marsden campaigned passionately to change medicine and the medical establishment resented him. He attacked quack doctors and said many patients had “fallen into the hands of ignorant and needy empirics who drug them with pugnacious medicines so long as their money will hold out and then discard them, often in a worse state then at the start”. His enemies were delighted when it turned out that his apothecary and one of his surgeons at the Royal Free Hospital were selling Frank’s Specific Solutions, a quack remedy for VD. Both were sacked but there was an embarrassing scandal.

In the 1870s the Royal Free became a teaching hospital. The School of Nursing was started and in 1895 it became the first hospital to appoint a female almoner, forerunner of the modern social worker, whose job it was to care for the non-clinical needs of patients. Female medical students had access to clinical practice on its wards. Astonishingly, the Royal Free was the only hospital ( apart from a short period during the First World War ) to accept female medical students before 1947.  The Royal Free also became the first hospital in England to have an obstetrics and gynaecology unit and by 1934 the mortality rate in the maternity wards was 2.8 per 1,000, the lowest in London.

During the Second World War the hospital was bombed. In 1942 William Beveridge’s report recommended that “Medical treatment covering all requirements will be provided for all citizens by a national health service.” On the inception of the National Health Service in 1948, the Royal Free joined with several smaller hospitals including the Children's Hospital Hampstead, the Elizabeth Garrett Anderson Hospital, the North-Western Hospital, Hampstead General Hospital and the London Fever Hospital in Liverpool Road to form the Royal Free Group.


The Gray’s Inn Road site was too cramped and it was decided that there were too many teaching hospitals in central London. Plans to replace the Royal Free Hospital with a new building on the site of the Hampstead Fever Hospital in Lawn Road were drawn up and the present incarnation of the Royal Free Hospital was officially opened by the Queen in 1978, a hundred and fifty years after Marsden found that girl dying in a doorway.

We all love our NHS, perhaps even more so now that it is menaced by politicians who don’t think anything ought to be free.

Let no man put this necessity asunder! We here across the pond are desperate to free ourselves from politicians, pundits and the Insurance Industry, to institute on payer Federal model for our health care....but, alas......there is violent opposition.

William Marsden, what a hero! - Thank you for this.

Inspiring, and very interesting to hear about the people behind the names. Especially interesting to hear that they were the only hospital to admit the cholera victims.
I was thinking, however, that even though it wasn't the smelly river that caused cholera,of course cleaning up the river did help, by getting rid of toxic organisms. It's sobering to think how often humans get things wrong, and the story of the scandal, with the quack remedies, could happen today; a salutary reminder to keep our eyes on the big picture and not to let revelations of inevitable human fallibility spoil good initiatives?