I love dipping into a book by Philip Gooden called "Skyscrapers, Hemlines and the Eddie Murphy Rule." It is a collection and history of those quirky laws that seem to govern every aspect of our life from Murphy's Law - "If anything can go wrong, it will" to the hemline theory - "Hemlines go up with rising stock market and drop with falling one". And the one I really enjoy, Hartman's Law of Prescriptivist Retaliation -


"Any article or statement about correct grammar, punctuation, or spelling is bound to contain at least one error."

(It has been pointed out that this statement does contain one punctuation error if you are British, though not if you are American.)

It is a delightfully funny and informative collection, but though it contains sets of laws from different genres of writing from crime to ghost stories, there isn't a list of "Historical Novelists' Laws", which I think is a great pity, so I thought I might kick off with one law that might have appeared on that list -


1) The author will discover the most interesting historical snippet which would have been perfect to use in their novel immediately after they emailed the final draft of the manuscript to the publisher.


I can personally attest to the truth of this law. One of the themes running through my new novel, The Plague Charmer, is medieval riddles and I use riddles as some chapter headings. I thought I had scoured every available source of genuine medieval riddles, but the day after I'd submitted the manuscript I discovered two little gems in a museum, recorded in 1460, which perfectly capture the bawdy medieval mind -


Q - What is the most joyful thing in all the world?
A - 'Tis a fart for it sings from its birth until it fades away.

Q - What the most noble king of all the trees in the forest?
A - 'Tis the Holly, for no one uses it to wipe his behind.


For the medieval audience, this second riddle would have been a trick question, for they all knew the holly was the king of the forest, but for a very different reason than that given in the answer to the riddle. We will soon be approaching the end of October and the Celtic festival of Samhain, which marks the beginning of the dark months of winter. At Samhain the Holly King defeats Oak King in battle and conquers the land, only to see the Oak triumph at Beltane and rule over the summer.


Another myth involving holly was centred around May Eve, the first night of Beltane, when the Bel-fire, or fire of light, was kindled. This involves not a king but a goddess, the ancient blue ice goddess, Cailleach Bhear, the old woman of darkness, who reigns from Samhain to Beltane. On this night she throws her magic staff under a holly bush for safe-keeping and is turned to stone. In that form she is guarded by the holly and its spirits until she can take up her queenship once more. That is why no grass grows under holly trees.

But the early medieval Church, always pragmatic in these matters, knew they could not suppress the 'pagan' customs of bringing holly into the house and all the many local traditions that went into gathering it, so they Christianised the holly tree. The holly's old names, holeyn, holme, hulvar or hulfere, were probably Old Norse in origin, but the Church decided they must be derived from 'holy' and said that holly bore white flowers to remind the faithful of the white sheet in which the newborn Jesus was wrapped and the shroud in which his crucified body was laid. The prickles represented Christ’s crown of thorns and the red berries, the blood or wounds. In Cornwall, holly was delightfully known as dear Aunt Mary's tree. Aunt Mary being a reverent term for the Virgin Mary. 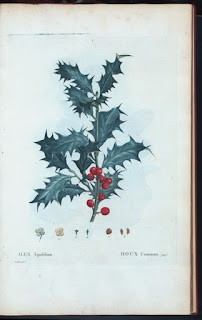 But as the Middle Ages progressed holly was to become victorious in a different battle, not between summer and winter, but between the sexes. Early medieval troubadours sang of holly as the man and ivy as the woman who each brought different but equal virtues and gifts to the marriage. But as medieval women increasing lost their rights, the holly became the strong, tough, protecting male, and ivy, the clingy little female who couldn't even stand up by herself without his support. As one carol written in 1456 puts it -

By the 16th century we even have a carol that describes how pigeons eat the ivy berries then shit on the ivy, something we are assured they would never do to holly. Although another 15th century carol is more encouraging or perhaps prophetic -


"Ivy, chief of the trees it is,
Veni, coronaberis."


Holly was believed to be a shelter for good spirits who entered with it if the boughs were brought into the house, and therefore holly was always be hung before mistletoe at Christmas, otherwise bad luck would follow. Holly protected houses and byres from evil spirits, witchcraft, fire and lightening. So, a staff made from holly was a useful defence when crossing the moors or mashes to protect you from the mysterious glowing sprites such as the Will-o-the-wisp that might lure you into a bog.


Doorsteps were often made of holly wood to prevent witches crossing them and holly hedges, as well as keeping out animals and thieves, would also stop evil spirits from entering. It was useful plant to carry when you were herding livestock too, because if a beast suddenly bolted, and you threw holly after it, the runaway would trot meekly back to the herd, summoned by the power and authority of this royal tree.

But holly bushes can turn nasty. On a road near Claonaig, on the Kintyre peninsular, a holly bush is said to dance out of the woods to confuse travellers into loosing their way, which I imagine they could easily do, if faced with prancing holly bush. In which case, they might do well to remember the laws of survival in very cold climates which Gooden lists in his book -

So, in the spirit of dear old Murphy's Law has anyone got a favourite law for the Historical Novelist?

"The author will discover the most interesting historical snippet which would have been perfect to use in their novel immediately after they emailed the final draft of the manuscript to the publisher."