My Day Out, by Sue Purkiss

A few years ago, I wrote a book about Alfred the Great, called Warrior King. A few days ago, I had the great privilege of reading from it on the Island of Athelney - the secret place in the marshes of Somerset, where in 878 Alfred hid from Guthrum and his Danish army. I had an audience of experts: the Badger class from North Newton Primary School.

And I do mean experts. When I'd gone into their classroom earlier, I'd seen that the walls were covered with information about the Anglo-Saxons and the Vikings. There were maps, there were pictures of warriors, there was information about what they wore, and there were stories. On the whiteboard was an Anglo-Saxon riddle which the children were trying to solve, and at the back of the room was a welcoming sign saying Waes hael, Sue Purkiss! When the teacher, Simon Day, took the register, he said 'Gode morgen, Jess/Josh/whatever' - and the children answered 'Gode Morgen' right back, without batting an eyelid. They were all thoroughly engaged - immersed even - in the period.

They had been reading Warrior King together, and when they'd realised that I lived quite close, they'd got in touch and asked if I would like to come and talk to them about writing the book, and then go with them to Athelney.

Athelney was where the book began. It's a magical landscape, where history touched by myth is almost palpable, and it was such a pleasure to share it with the Badgers, their teacher Simon, and their two teaching assistants, Vicky and Claire. They were all so enthusiastic; there wasn't a great deal I could tell them, because they already knew so much. 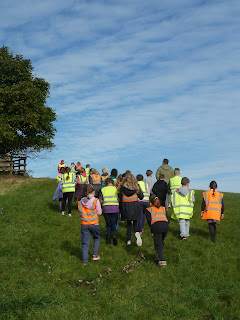 Here are the Badgers climbing up towards Alfred's monument, which was erected in Victorian times. The farmer had kindly cleaned the inscription, and moved the cows which would usually have been in possession. In Alfred's time the long green mound would have been higher: the land has settled, partly because of the weight of the monastery which the king caused to be built in celebration of his victory over Guthrum. (If he'd lost, would we all be speaking Danish now? Certainly the course of history would have been different. All the other English kingdoms had been overrun: Alfred was the last man - just about - standing.)

We looked out towards nearby Burrow Mump, one of the conical hills which rear up above the levels: another is Glastonbury Tor, visible in the distance. Simon told the children to write notes about what they were seeing, hearing, smelling; they discussed whether there was anything that would touch them, or that they could taste, and they agreed that they could feel the touch of a cool soft wind, and wondered whether the Mump would have been used as a lookout post; they decided it almost certainly would have been.

Then we moved across to the other end of the mound, where, some years before, the Time Team had uncovered stones which had been burnt at temperatures which would only have been reached in the heat of a blacksmith's forge; this must have been where weapons were forged for the decisive Battle of Edington. They also found a knife there - the Badgers reminded me it was properly called a seax - made of steel, which was an expensive, high status metal made only for extremely high-ranking leaders. 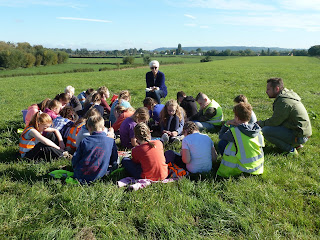 After this, we went on to climb Burrow Mump (small but quite steep), and had lunch beside the ruined church which was given to the National Trust by the landowner after the Second World War, to serve as a memorial to local people who had been killed. 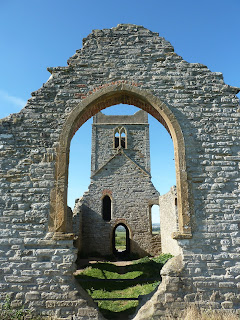 Then Simon got the children to look round at the countryside spread out for miles below us: vivid green fields intersected by willow-edged rhynes (ditches), leading to low hills on the horizon. He pushed them to describe exactly what they were seeing, and to use alliteration and kennings (descriptive phrases such as peace-giver, for a king, or death-singer, for a sword), just as the Saxons would have done. 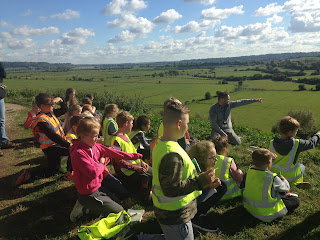 Here are Simon, Vicky and Claire - inspirational teachers and teaching assistants. It was a privilege to see them at work; it was education as it should be: vibrant, creative, magical. 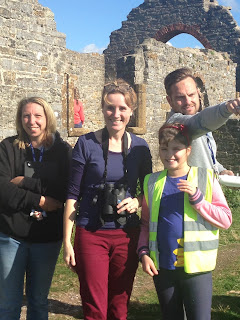 Thanks to them for inviting me - and to the Badgers, Waes hael!

And just as a postscript - here's a picture taken not far from Burrow Mump during the floods almost three years ago. Perhaps this was more how it looked in Alfred's time: mysterious, haunting - and very, very wet. 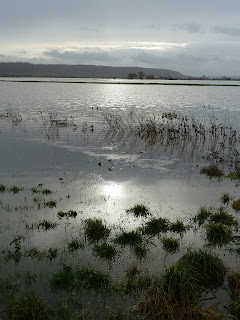 So heartening to hear of history being taught in this "full" way, still. Hooray for the Badger Class and staff,and for your visit. The kind of school visit that offers at least one reason for the making of the book - and the power of your writing. Warrior King is a memorable book and I am so pleased you shared this magical visit with all the readers here on History Girls!

What a great day! And what a lucky class!

Now THAT'S teaching! Thanks for this, Sue - a real heart lifter!