This autumn I went to visit the National Trust's Nuffield Place, the home of William Morris, Lord Nuffield, from 1933 until his death thirty year later at the age of 85. William Morris was one of the wealthiest men in Britain and yet he lived frugally and privately with his wife who he met at a cycle club in Oxford before he was 20. 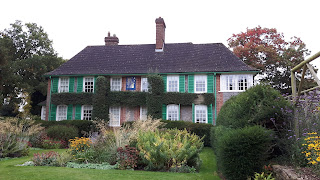 He started life mending bicycles and was himself a winning rider. His workshop was soon turned over to motor cycles and he designed by Morris Motor Cycle in about 1902. At this stage he moved into buildings in Longwall Street, Oxford, opposite Magdalen College, where he repaired bicycles, operated a taxi service and repaired and hired out cars. In 1912 he designed his first car, the bullnose Morris. His work was interrupted by the First World War but in 1919 he sold 400 cars and by 1925 he was selling 56,000. 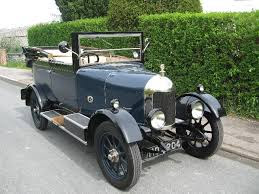 At the height of his career he was reputed to be earning £2,000 per day (about the same in dollars given the woeful state of sterling at the moment!). When asked about his great wealth he replied 'Well, you can only wear one suit at at time.' What struck me about this lovely 1930s house was its modesty that reflected its owners'. No ostentatious decoration or chandaliers, no leathery portraits of ancient ancestors dragged up from a past that didn't truly exist, and no extravagant gold bath taps. 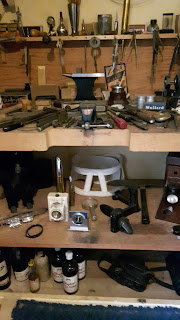 For me the most exciting discovery was that the cupboard in his bedroom was not full of clothes but was in fact a miniature workshop. It was a vignette into his life that I had not expected. Apparently he was a light sleeper and would often 'worry out'a problem in the night. I had a vision of him sitting in his pyjamas in front of his cupboard, allowing his mind to rest on the various objects in there that might provide an answer to his questions. Lord Nuffield was famous for his philanthropy. There are well-known foundations that bear his name, such as the Nuffield Orthopaedic Centre, which was established in 1931 or the Nuffield Foundation (1943) which he endowed with a capital sum of about £10,000,000 'to provide medical and social relief'. This grew out of his work in the 1920s and 1930s to help relieve the 'sick, crippled and the poor and to alleviate social injustice.' But what really interested me were the smaller donations made with aforethought and great generosity that would go almost unmentioned and at times almost unnoticed. On his 62nd birthday, on 10 October 1939, he put a cheque into a nurse's collecting box at the Mansion House. The logo on the poster she was holding read 'Give freely' to the Lord Mayor's Red Cross Fund. When the cheque was unfolded it was in the sum of £100,000 (about £4 million in 2016). 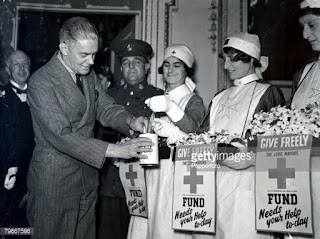 My favourite donation he made is even less well-known than the Red Cross cheque. During the five and a half years of the Second World War he donated sanitary towels to the women's forces. This was the most thoughtful thing I could think of and I was deeply touched by his concern for the comfort and reassurance of a steady supply of these vitals items, known by the recipients as 'Nuffield's Nifties'. You really couldn't make it up. William Morris, Lord Nuffield, gave away £30,000,000 (or over £2 billion in today's money) over the course of his life. He will remain the most famous of British philanthropists for all time but for me he will be the modest millionaire who knew enough about the real world to know what was really needed.
Posted by Unknown at 00:00

He sounds like a lovely man - thanks for introducing me to him.

What a wonderful man! I'd no idea, so thank you for telling about him.

Thank you so much for this post,Julie. This account of Nuffield's quiet and thoughtful philanthropy makes welcome reading in today's climate.

Thank you for this. I had no idea Lord Nuffield was such a generous, thoughtful and kindly man.

Not many men, even now, think about the need for sanitary towels! Well done Juie for finding one of those hidden gems of war history.