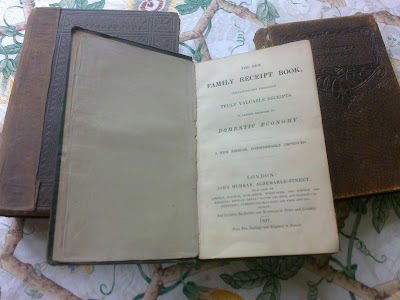 I’ve been reading some more recipes and household tips from the ‘Family Receipt Book’ from 1837 which formed the subject of my August post, and I can’t resist sharing some more of them here. To dip in and out of this book – which is over 500 pages long – is to be amused, impressed and bewildered not only by the often mysterious (and sometimes downright dangerous-sounding) ingredients, but by the sheer variety of things – methods, objects, tasks – thought likely to be useful to the average 19th century householder. There are innumerable separate recipes for making varnish, for example: varnish for oil-paintings, for toilet boxes and fan cases, for earthenware vessels, for plaster casts, for furniture.  There is Amber Varnish, Copal Varnish, Elastic Gum Varnish, Black Japan Varnish –

There’s even a varnish ‘For preserving Insects, Fruits etc’:

Take one pound of rectified spirits of wine, and two ounces of white amber; add thereto an ounce of white sandarac and white mastic, an ounce and a half of Venice turpentine; digest the whole in balneo mariae during forty-eight hours, to an entire dissolution; take out the intestines of the insect you have a mind to preserve: lay them for some days in rectified spirits of wine, mixed with clarified sugar-candy; afterward besmear them with your varnish till they are transparent as glass; in this manner you will preserve them for a long time.

The mind boggles. What is balneo mariae? What is white sandarac? How do you take out an insect’s intestines?  Why would you wish to?  What did a 19th century housewife's shopping list look like?  'Just sending the maid out for six drachms of balneo mariae and a pint of dragon's blood'?  (Yes, dragon's blood really does keep turning up in various recipes...)  I do not know, any more than I know why the average householder should wish for a ‘Varnish to prevent the Rays of the Sun from passing through the Glasses of Windows’? Were people really that worried about fading antimacassars?

Some of the ‘receipts’ do sound worth trying, though you might want to cut down on the sugar.  To make ‘French Black Current Brandy’:

To each bottle of brandy add a pound of black currents, picked, with a little allspice, and broken cinnamon in a small muslin bag. Put the whole into a large bottle or jar, and cork it closely for six months. Then pour off the liquor, and for each bottle of this liquor add three-quarters of a pound of loaf sugar...

My teeth are wincing. Maybe not. How about ‘To make twelve Gallons of Milk Punch’?  The recipe begins, ‘Take four gallons of rum or brandy...’

Then there’s ‘Domestic remedies’.  For ‘Cramp and Spasm’ during the night, the suggested remedy is to take thirty to forty drops of a blend of ‘Tincture of Opium and Aether’ every evening before retiring to bed. That should do it.  To cure hiccups (‘an involuntary convulsive motion of the muscular coat of the stomach’) the little book suggests two teaspoons of ‘Fetid spirit of ammonia, Ammoniated tincture of valerian (of each, thirty drops) and Musk julep, three large tablespoonsful.’ In cases of pleurisy (which I once had and know to be very painful) I feel extremely sorry for the poor 19th century patient:

Bleed freely from the arm, taking away at least sixteen ounces from an adult and repeating the operation according to circumstances twice, thrice or even four times in twenty-four hours. [My italics]. Whatever may be the violence of the fever, a large blister should be applied to the side as near to the seat of pain as possible.  When, as it sometimes happens, a sufficient quantity of blood cannot be procured, twelve leeches should be applied to the side, and repeated. ... Success will depend on a large quantity of blood being taken from the patient in the course of a few hours. [My italics].

As if that was not enough, the book urges that the patient should also be given laxatives! I feel we don’t really appreciate modern medicine half as much as we should.
Posted by Katherine Langrish at 06:00

"I feel we don’t really appreciate modern medicine half as much as we should."
After reading this, we do now!

My partner had pleurisy on board an Atlantic weather ship in the 1970s. He agrees that it is very painful. Although weak, feverish and in severe pain every time he coughed (and that was often), he wasn't deemed ill enough for the ship to head to port. The doctor was the ship's steward who, as treatment, handed over a bottle of navy rum.

Probably a lot more efficacious (and certainly more enjoyable) than the treatment suggested above!

Balneo mariae - surely a Bain Marie or double saucepan? Dragon's Blood is, I think, the resinous sap of a South American tree. You are preserving the insect to display in your cabinet of curiosities. "Japanning" was a craze among Regency ladies - you turned your dull old brown furniture into black furniture with gilded decoration and probably painted flowers, birds and scenes. But we're all out of dwarf's hair, dearie.

Thankyou, Lucy! And the Balneo Mariae, I've been informed by the Australian writer Pamela Freeman, is "the species name for snails/molluscs, and balneo means bath, so it probably means let it dissolve in snail water, which was often used as an ingredient in medicines, etc. Sandarac is red arsenic sulphide."

(That should have read 'Mariae is the species name...')

Healthy lives our ancestors lived, eh? Fascinating and entertaining. Wonder what future generations will say about our nostrums?