Here is a photograph of one of the most delightful bookshops in London. It's the Persephone Bookshop, in Lamb's Conduit Street and it's the home of those beautiful, dove-grey jacketed volumes to which I am addicted. Persephone has published many women writers whose work would otherwise have disappeared. It has done this most beautifully, and each of their books is a pleasure to hold and to read.

The shop is tiny. Nevertheless, this has not prevented Persephone from hosting very interesting events. They invite a speaker; they offer a tasty lunch of vegetarian salads and cheese and crusty bread. There is wine. There is always a full house, as the Persephone women (and yes, it is mostly women) are enthusiastic and interested and an ideal audience in every way. 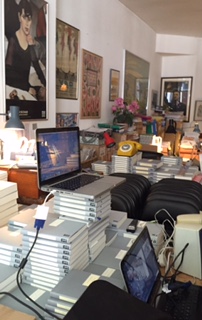 On September 13th, I travelled to London to hear Anne Sebba speak about her latest book, which I'd just bought. It's called 'Les Parisiennes; how the women of Paris lived, loved and died in the 1940s'

It was the hottest day of the year. London is not the place to be in such weather, and Sebba was able to point out that  the heat we were enduring  was similar to that  in the Vél d'hiv (Vélodrome d'hiver) where  so many people were confined after the round up in July 1942 in grotesquely horrendous  conditions.

Full disclosure: I know Anne Sebba a little. We've had tea together in Cambridge and I was a big fan of her biography of the Duchess of Windsor. Here she is, looking elegant just before her talk. 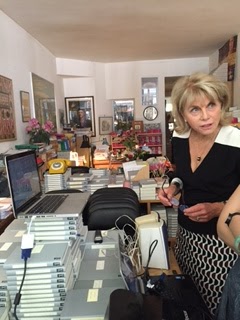 And a little further down the page is a photo of the cover of  Sebba's book. The subtitle is important, because what this book does so well is show us the variety of women who were affected by the Nazi occupation; how they coped, what they had to do to keep body and soul together and above all how they  managed to look after their dependants. Children need food. Elderly parents need care. And if you are a Parisienne, you are interested in how you look. You make an effort to be stylish. You use every clothing coupon in the best and most stylish way you can. You don't let the side down by appearing dowdy.  You do whatever you can and in the best way you can: that's the message from this wonderfully rich kaleidoscope of experiences of women's life in those days. Dealing with what life throws up, day after day is what these women had to do.  Sebba is keen for us not to make judgements, even on those who behaved, as we would say now, badly. But we don't know what we'd do if faced with their predicaments. Maybe we'd  be brave Résistantes  or at least rescuers, but no one knows until she's tested exactly how she'd behave. 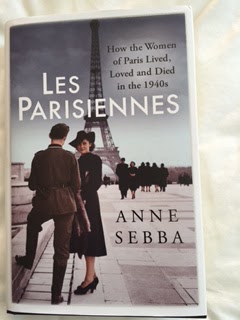 Anyone reading this book will emerge with a clear timeline of how the events unfolded. The arrival of the Germans; the worsening of the situation under the Vichy government; the systematic and regulated horrors perpetrated against the Jewish community and the complicity of some French women in these things - some women, but by no means all. Sebba is at pains to be fair and to show that as well as 'horizontal' collaborators and those who made accommodation with the Nazis, there were others who resisted, either by becoming part of a network of Résistantes or by hiding Jews in their houses. The situations that many found themselves in were unbearable. And however many times we read about it, it's always deeply shocking and chilling to read how easily Jews, who had been part of the fabric of French society and culture for generations and who thought of themselves as French first and foremost, were turned almost overnight, it seems, into The Other: the ones who had to wear yellow stars on their clothes, and be rounded up and  sent away, often to their deaths.

Paris was always the capital of fashion, culture and beauty and after the end of the war, de Gaulle was keen that the image of the city be restored as quickly as possible. That lead to anyone who returned from the camps in Nazi Germany, such as Ravensbruck, being thrust as far as possible away from the limelight. It was a long time before the uncovering of these wartime stories began.

If you look at the index of  Les Parisiennes,  you will see that Sebba's account takes in the whole of French cultural life. Colette, Picasso, Piaf,  Nemirovsky, Genet, every designer you can think of, jewellers, actresses, singers, financiers, writers: they're all there, cheek by jowl with others who are less well-known but whose wartime deeds Sebba examines with clear eyes and an understanding heart. Her sympathy for those she's spoken to comes across very well and it is greatly to the credit of both the writer and her publisher, Weidenfeld and Nicholson, that this is such a lavishly produced book. The photographs are brilliant and bring  these women before us in all their vanished glory. It's a fascinating book: full of the telling personal details that can only be achieved when the writer sits down to talk to the subjects of her work. It would make a magnificent Christmas present for anyone who's interested in this period.

(By coincidence, just at the time that I started reading Les Parisiennes,  I was finishing a novel by the French Nobel prizewinning writer, Patrick Modiano. It's called THE SEARCH WARRANT and I do urge anyone interested in this time, especially readers of Sebba's book, to read it. It's not like any other novel I've ever read and it's also very short.)
Posted by adele at 01:30

One city, one small slice of time, so very many stories. Thanks for reminding me of the millions of patterns in the celestial kaleidoscope, Adele!

Thanks, Adele. I'm already thinking of someone who'd love this for Christmas - and - stupidly - I didn't know Lamb's Conduit Street was home to the Persephone bookshop either.