The girlie side of history by Sarah Gristwood

Our October guest is Sarah Gristwood, who - as well as being a well-respected historian -  is a History Girl Reserve, one of that splendid band of writers who give us "anytime posts" that can be used when one of our regulars needs to take a break for a month.

Sarah has written two bestselling Tudor biographies, Arbella: England’s Lost Queen and Elizabeth and Leicester; and the eighteenth century story Perdita: Royal Mistress, Writer, Romantic which was selected as Radio 4 Book of the Week.  In  2012 she brought out a new  book – Blood Sisters: the Women Behind the Wars of the Roses. Her latest title is  Game of Queens, about the chains of women and power running through the sixteenth century.

Shortlisted for both the Marsh Biography Award and the Ben Pimlott Prize for Political Writing, Sarah is a Fellow of the RSA, and an Honororary Patron of Historic Royal Palaces.
sarahgristwood.com

The name of the group demands it, really. The History Girls . . , and what I’d call the girlie moments from my particular chunk of history! When, in a publicity meeting for my new book, Game of Queens: The Women Who Made Sixteenth-Century Europe I offered a list of top ten girlie moments, the women got it instantly. My male commissioning editor was too nice to say anything. But I swear his eyes roamed around the room, hoping the cricket scores would materialise on the walls and sweep him spiritually away.

Where to start, chronologically? The sixteenth century saw an explosion of female rule. Large swathes of Europe were under the hand of a reigning queen or a female regent - mothers and daughter, mentors and proteges. Game of Queens traces the passage of power from Isabella of Castile to her daughter Katherine of Aragon, and on to Katherine’s daughter Mary Tudor. From the French regent Anne de Beaujeu to Louise of Savoy, through Louise’s daughter Marguerite of Navarre to her own daughter Jeanne d’Albret, as well as to Marguerite’s admirer Anne Boleyn and finally to Elizabeth Tudor.

Anne de Beaujeu, regent of France, wrote a manual of instruction for powerful women. Lessons for My Daughter. One piece of advice was not to pay too much attention to clothes - ‘Past 40, no finery can make the wrinkles on your face disappear’. Perhaps Margaret Tudor should have read it. When her brother Henry VIII sent her the present of some wonderful dresses, Margaret was in such pain from sciatica she couldn’t even bear to be turned in bed. But she still made her attendants hold up the dresses so she could see them, every day.

And there was, after all, a serious point here. Clothing was an important signifier of rank. Margaret - widowed when her brother’s armies killed her husband, James of Scotland - had now been forced to flee that country. She wasn’t being treated as a queen any longer - but the dresses made her seem queenly.

While Henry VIII was looking for a new bride, after beheading Anne Boleyn, his eye lit on Marie de Guise. He said that they should get on together, because they were both ‘large in person’. ‘I may be large in person’, she retorted, ‘but I have a little neck!’ Christina of Denmark, similarly honoured, said that if only she had two heads, one of them would be at the English king’s disposal. Sometimes girl power means talking sassy.

And it’s something, after all, to be allowed to be girlie. In the early part of the sixteenth century, the heyday of what I see as the Age of Queens, Margaret of Austria not only ran the Netherlands during the minority of her nephew, the future Charles V, she was at the very heart of European diplomacy. Margaret ‘is the most important person in Christendom, since she acts as mediator in almost all the negotiations between the princes’, wrote her one-time father-in-law Ferdinand of Aragon, flatteringly.


The childless Margaret was called ‘the great mother of Europe’ - but by the time she was succeeded as Regent of the Netherlands by her niece Mary of Hungary, ambassadors were reporting gleefully that Mary was ‘a little mannish’, and that everyone knew she wouldn’t have children - she was far too sporty. When Mary in turn was succeeded by her niece, Margaret of Parma, there was much talk of her moustache . . . After all in a woman in power couldn’t be entirely a woman, could she?

It was Mary Queen of Scots who liked actually actually to dress up in men’s clothes and go roistering around the Edinburgh streets with her ladies. (There was always the joke that the best way to end the troubles between Scotland and England would be for Mary and Elizabeth I to marry.) Her own minister would describe Elizabeth as ‘more than a man - and in truth sometimes less than a woman’. But how’s this for a girlie scene? - in that stereotyping, cat fight kind of way. When Mary sent Sir James Melville on a diplomatic mission to Elizabeth, the Tudor queen kept pressing him as to whether she or Mary were the taller, the better dancer, the prettier. Mary was the fairest queen in all Scotland and Elizabeth in all England, answered Melville - diplomatically.

It all depends, after all, what we mean by ‘girlie’. In 1572 when Catherine de Medici and Jeanne d’Albret met to negotiate the marriage that was supposed to end France’s Wars of Religion, they broke off their discussions for a day’s shopping round the Paris boutiques, disguised as ordinary bourgeoises. Or so it was reported, anyway . . . Were the men who reported it trying to point up their womanly weakness, or did they understand that this could be a real bonding ritual? (‘As woman to woman, make her mad, while remaining calm yourself’, one negotiator on the Catholic side had urged Catherine de Medici.)

When Mary of Hungary heard about the execution of Anne Boleyn, and Henry VIII’s hasty marriage to Jane Seymour, she declared that she had to be glad, in a way. Anne had been a Francophile, and thus no friend to Mary’s Habsburg family. But, all the same, Mary wrote ‘It is to be hoped, if one can hope anything from such a man [as Henry], that if this one bores him he will find a better way of getting rid of her. I believe that most women would not appreciate it very much if this kind of habit becomes general. And although I have no inclination to expose myself to dangers of this kind, I do after all belong to the female sex. . .’ It was an expression of sisterhood, even if the term is of today.

Because I’d say this was a sisterhood - at least in that earlier part of the century, before religious differences tore Europe apart, and fractured bonds A band of powerful women, of sisters, who recognised both their own bonds as female, and their ability to exercise power in a specifically feminine way.


In 1529 Margaret of Austria, the Habsburg emperor’s aunt, and her former playmate Louise of Savoy (now mother to the French king François) met to negotiate the ‘Ladies’ Peace’ of Cambrai. War between France and the Habsburgs was the curse of the century, but the women agreed they could probably do something about it, if their men would only stay out of the way. The men would be concerned about their honour, as Margaret put it tactfully. ‘On the other hand, how easy for ladies… to concur in some endeavours for warding off the general ruin of Christendom, and to make the first advance in such an undertaking!’

This idea - of women coming together in the interests of peace - would recur through the sixteenth century and beyond. Perhaps no others would achieve the success of Margaret or Louise . . . But perhaps, too, this is what we ought to mean by ‘girlie.' 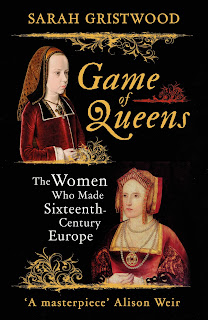 Email ThisBlogThis!Share to TwitterShare to FacebookShare to Pinterest
Labels: Game of Queens, Louise of Savoy, Margaret of Austria, Sarah Gristwood