When Good King Arthur Ruled this land... by Imogen Robertson 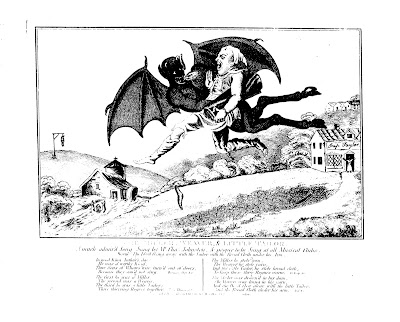 It’s strange the things that bubble up in your mind when you definitely should be doing something else. Today I was clearing the washing up and thought I was thinking about the current work in progress, but husband came in and asked what I was singing. I hadn’t realised I was singing, but once I’d managed to sync my mind cogs a bit, I realised I’d been giving a pretty enthusiastic rendering of ‘When Good King Arthur ruled this land…’

It’s a pleasantly macabre  and Halloweenish type folk song which my mother taught me, and it has a pleasing call and answer form which made it fun to sing together. The version we know and have been singing in my family is recorded as ‘A Dorsetshire Ballad’, in the Oxford Song Book, Collected and arranged by Percy C. Buck in 1921. You can see it on archive.org. I hadn’t consciously thought about it in years, so I asked Mum where she had learned it, and apparently her mother taught it to her. Before that, in our family at least, it disappears into the mists of ages.

I found it rather disturbing when I was a child. The song tells of three servants (or sons of rogues, or sons of yore - apparently bowdlerised from sons of whores), who King Arthur exiles for not singing. They are thieves and come to sticky ends. The miller is drowned in his pond, the weaver is hanged in his loom (or yarn), and the Devil makes off with the little tailor boy. I vividly remember imagining the devil heading back to hell with the boy, still clutching onto his stolen cloth.

So I went searching for it down the internet sink-hole.

A very similar version, though the tune is different, was first published in Nursery Rhymes and Country Songs by M H Manson in 1877 and she collected it from her mother’s family, the Mitfords of Mitford in Northumberland  http://www.tradsong.org/page12.htm I wish I could find out more about Miss M. H. Manson by the way. If anyone has any clues, let me know. 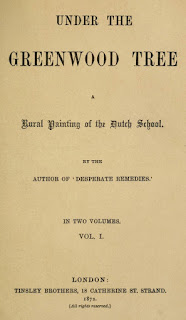 The song makes an earlier appearance in Thomas Hardy’s Under the Greenwood Tree of 1872:

Shiner grasped the candlestick more firmly, and, lest doing this in silence should not imply to Dick with sufficient force that he was quite at home and cool, he sang invincibly—

“‘King Arthur he had three sons.’”

“Indoors, I think,” said Fancy, looking pleasantly at him.

Dick surveyed the scene, and did not seem inclined to hurry off just at that moment.  Shiner went on singing—

“‘The miller was drown’d in his pond,
The weaver was hung in his yarn,
And the d--- ran away with the little tail-or,
With the broadcloth under his arm.’”

“That’s a terrible crippled rhyme, if that’s your rhyme!” said Dick, with a grain of superciliousness in his tone.

“It’s no use your complaining to me about the rhyme!” said Mr. Shiner.  “You must go to the man that made it.”

Well, Mr Shiner, I would if I could.

The image at the top of the page comes from the Broadside Ballads Online from the Bodleian Libray and was published Dec. 12, 1804, by Laurie & Whittle, 53, Fleet Street, London 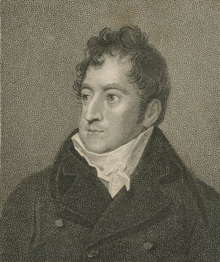 An earlier version still of the song appears as an Old Glee with Old Worlds in The Battle of Hexham, a play by George Colman the Younger, written in 1789. It’s very different, but the form and themes are close enough for us to call them cousins.

_When Arthur first, in court, began_
_To wear long hanging-sleeves,_
_He entertain'd three serving-men,_
_And all of them were thieves._

_The first he was an Irishman,_
_The second was a Scot,_
_The third he was a Welshman,_
_And all were knaves, I wot._

_The Irishman, he loved Usquebaugh,_
_The Scot loved ale, called blue-cap;_
_The Welshman he loved toasted cheese,_
_And made his mouth like a mouse-trap._

_Usquebaugh burnt the Irishman,_
_The Scot was drown'd in ale;_
_The Welshman had like t' have been choak'd with a mouse,_
_But he pull'd her out by the tail._

In Folk Songs of the Catskills by Norman Cazden, Herbert Haufrecht and Norman Studer, the editors suggest that the song Falstaff sings in Henry IV Part II is part of the same tradition:

FALSTAFF
[Singing] 'When Arthur first in court,'
--Empty the jordan.

--'And was a worthy king.' How now, Mistress Doll!

There’s a suggestion that it grew out of a satire of a ballad by Thomas Deloney (c. 1543 – April 1600) called The Noble Acts of Arthur of the round Table.

When Arthur first in court began,
and was approved King:
By force of armes great victories wan,
and conquest home did bring. 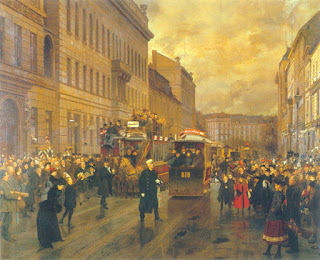 There’s an American version too (by the way, did you know the American National Anthem is an 18th Century English drinking song?) Anyway, this one begins:

In good Old Colony times
When we were under the king
Three roguish chaps fell into mishaps,
Because they could not sing.

Now this version was quoted by Bismarck in February 1888 in his final major speech to the Reichstag which warned against European war. Here is a picture of him leaving the Reichstag after making it.

So there you have it. Falstaff, Hardy, the Mitfords, washing-up, my mother and Bismarck all in one single post. Now what was I supposed to be thinking about again?

As was the thread on http://mudcat.org/
The image of Bismarck comes from http://germanhistorydocs.ghi-dc.org/

Thanks for that, Imogen!

I loved this! It's fascinating how it has spread into such different cultural takes - I actually remember learning The Battle of Hexham version at school which seems very odd and I'm sure there was no context on it. It is now stuck on a repeating loop in my head...

I wonder if there's a version somewhere on YouTube? Folk songs do vary, even in the same country, and of course, there would be American versions, brought over from the Old Country and adapted. Thanks for the entertaining post, Imogen!

Thanks all! I did try to find a version on youtube, but no luck. We need to start a History Girls choir....