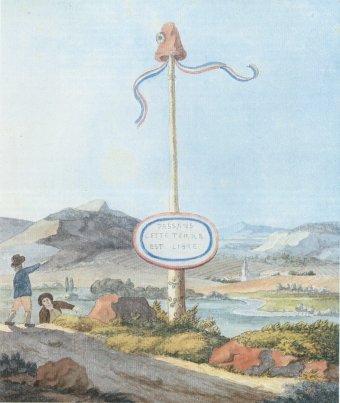 Liberty poles sprouted all over Europe after the French Revolution. Until I found this watercolour by Goethe of the Liberty pole at the border of the Republic of Mainz in 1793, I was unable to visualise them. In their need to replace the religious and monarchical symbols they had just destroyed, the revolutionaries needed to find new symbols to inspire people. So they erected a tall wooden pole, usually a flagstaff, which is also of course related to a maypole as a traditional and rather obviously phallic symbol of fertility and celebration. A Phrygian cap was hung on the top of the pole and, in this example, there is also a tricolour ribbon.

The Phrygian cap (in French, le bonnet Phrygian), was a soft, brimless, conical hat. It is sometimes called the red cap (le bonnet rouge) or liberty cap (bonnet de la Liberté). Its link with Phrygia in Minor Asia seems to be that Phrygia was a source of slaves who, if they were freed, wore their traditional headgear again. During the Roman Empire the Phrygian cap (in Latin, pileus) was worn on festive occasions such as the Saturnalia, and by former slaves who had been emancipated by their master and whose descendants were therefore considered citizens of the Empire. Immediately after the assassination of Julius Caesar the plotters went to meet a crowd of Romans at the Forum where they brandished a pole with a pileus on top of it to symbolize the liberation of the Roman people from the tyranny of Caesar. During the Enlightenment these Phrygian caps became a symbol of liberty.

The French took this useful symbol directly from the American revolutionaries, who were inspired by the Liberty Tree, a famous elm tree that stood in Boston near Boston Common, In 1765, colonists in Boston staged the first act of defiance against the British government at the tree in the years before the American Revolution. As trees took years to grow Liberty poles were often erected in town squares in the years before and during the American Revolution. Tom Paine wrote a widely distributed poem in honour of these trees:

With one spirit endued

They one friendship pursued

And their temple was liberty tree.

Liberty trees and poles were often destroyed by British authorities and then defiantly replanted.


In the following decades Arbres de la Liberté became an international symbol of the French Revolution, the first being planted in 1790 by the pastor of a Vienne village. When General Berthier marched on Rome 1798 he established the short-lived Roman Republic, known by many Italians as La Repubblica per Ridere or the Ridiculous Republic. When the Pope protested he was deposed and taken to Valence where he died the following year, at 81. A liberty pole topped with a cap of liberty was planted in the Forum.

Members of the Assemblies of Paris were obliged to wear a Liberty cap, which replaced the royal fleur-de-lis as a national symbol. However, Napoleon is said to have detested the Phrygian cap and after he proclaimed himself First Consul for Life the capped figure of Liberty was replaced by the less revolutionary helmeted Minerva. Liberty caps were then removed from all public monuments but reappeared as a potent symbol of rebellion during the Hundred Days in 1815, when Napoleon escaped from Elba, marched on Paris and seemed likely to seize power from Louis XV111. 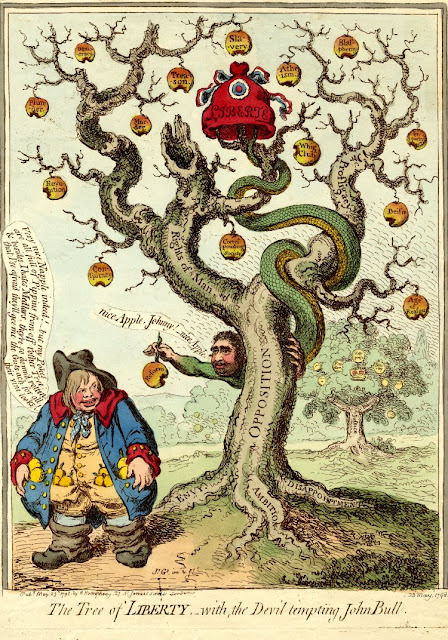 Of course one person’s liberty is another’s slavery; people suspected of being aristocrats or counter revolutionaries were often hanged on Liberty poles and trees. James Gillray, who has been called the father of the political cartoon, started as a radical but later supported Pitt’s reactionary government. In 1797 Canning arranged for Gillray to receive regular payments from the government as a reward for his attacks on the Whigs (William Cobbett claimed that Gillray had been granted a pension of £200 a year). In this brilliant satirical etching he shows us The Tree of Liberty, with the Devil Tempting John Bull.
A serpent with the head of Charles James Fox, the leader of the Whigs, is wound around a tree (an oak, naturally). At the tip of the serpent’s tail, coiled round the upper branches, is a large cap of 'Liberté', decorated with tricolour cockade and ribbons. Serpent Fox is holding out a rotten apple inscribed 'Reform' to John Bull, who wears the Windsor uniform of blue coat with red collar and cuffs. The pockets of his coat and waistcoat bulge with round golden apples.

Diabolical Fox hisses, "nice Apple, Johnny! - nice Apple". Doughty reactionary John Bull replies: "Very nice N'apple indeed! - but my Pokets are all full of Pippins from off t'other Tree: & besides, I hates Medlars, they're so domn'd rotten! that I'se afraid they'll gie me the Guts-ach for all their vine looks!"

The trunk of the tree is labelled 'Opposition' and its roots are: 'Envy', 'Ambition', 'Disappointment'. The main branches are 'Rights of Man' and 'Profligacy'. Each rotten apple or medlar has an inscription: 'Democracy.', 'Treason.', 'Slavery.', 'Atheism.', 'Blasphemy.', 'Plunder.', 'Murder.', 'Whig Club', 'Impiety', 'Revolution', 'Conspiracy', 'Corresponding Society', 'Deism', 'Age of Reason' (Paine's deistic book).In the background (right) is an oak in full leaf: its trunk is 'Justice', the roots 'Commons', 'King', 'Lords', the branches 'Laws' and 'Religion'. From it hangs a crown surrounded by 'pippins', some inscribed 'Freedom', 'Happiness', 'Security'. In another dazzling Gillray print, Promis’d Horrors of the French Invasion, Gillray shows William Pitt, the Prime Minister, tied to a liberty pole while Charles Fox flogs him. French troops march down St James’s Street and the palace is on fire.

Liberty poles resurfaced In 1945, following the liberation of the Netherlands from Nazi occupation, when one was erected on Dam Square in Amsterdam. Marianne, the feminine representation of the French Republic, is sometimes shown wearing a Phrygian, or Liberty, cap, which has now become a rather chic pixie beret. Do any of you know of any more recent examples of liberty poles or trees?