A TRIP TO THE BATHS by Penny Dolan 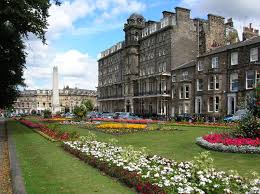 When visiting friends and family come to see us, we can take them to several local places: Fountains Abbey, Brimham Rocks, Bolton Abbey or  Sutton Bank and the North York moors, and so on and so on.Yet I rarely take visitors to what was – or is – one of the treasures of Harrogate town: the famous Turkish Baths.

As you can imagine, one must know one’s guests rather well before suggesting a session in such steamy surroundings.

However, as a good long-time friend was staying, it seemed the right moment to try a trip to the Baths. It was a while since I’d been there and that was when nudity was the expected dress code. However, following what were referred to as “improper incidents” during some sessions - none that I attended - the baths were discreetly rehabilitated and redecorated rather than being demolished or re-purposed.

Now, over the phone, staff gently suggested that swimsuits are optional and as there were several available in the back of my wardrobe, this eased matters. And swimsuits definitely were the chosen style all round that day, although on other occasions, one could certainly try for authenticity.

The Turkish Baths were created in 1897, as one part of the huge and imposing complex of treatment rooms known as the Royal Baths. This Victorian edifice was created by a consortium of local hoteliers and business men, keen to attract a better class of visitor to their new Borough.

I can’t help feeling a little grieved that over the last decades, the Council has sold off several sections of this distinctive building. The Winter Gardens are now occupied by Wetherspoons – though that is still graced by a grand staircase – while the magnificent assembly rooms have become a grand Chinese restaurant, and are therefore no longer available to general sightseers searching for past history.

When the Baths were the Baths, guests – or patients - entered the grand foyer with its octagonal mahogany “serving” counter, and the black marble columns supporting the magnificent domed roof overhead. Then, after disrobing in either the Parliament or Montpelier rooms, the patients were could take the famed waters. (Though one sees bottled Harrogate Water everywhere now, the original well, before it was sealed, had a horridly sulphurous quality and a particularly strong effect.)

Back then, the waters were drunk, or bathed in or used for a great variety of other hydropathic health treatments, of which – if one studies the photographs in the Pump Room Museum -   the Turkish Baths certainly seems the most relaxing.

The setting of the baths is still quite lovely, full of Islamic arches, screens and alcoves, all decorated with the original richly patterned tiles.

After showering, one progresses between the three heated chambers – the warm Tepidarium, the intermediate Calidarium, and the hottest room, the Laconium.

The dry air grows hotter and hotter and the tiled floor is soon almost too hot to bear. One can dream in the swirling mists of the steam room, take a warm or cool shower or take a dip in the cold plunge pool - an experience which may be authentic and traditional, but is not one I’d suggest at all: I consider it an option, not an obligation.

While I lay there toasting - and hoping my guest was still resting on one of the white couches in the relaxation room - I could not help thinking of  and admiring the bolder travels and expeditions of other History Girls, those who are off seeking sites of distant caravansera, hammams and bathhouses. all far more ancient than this Victorian re- creation.
I must add that my guest and I were so rested we were barely able to stagger uphill to Betty's for afternoon tea and toasted tea-cakes.

Heaven on a stick. Even vicariously, this feels so good - AND historical!

I went to the Harrogate Turkish Baths while on a Northern book tour - it was great but I wished I'd had a friend to enjoy it with!

Sounds wonderful. I envy you!